CREATIVE FICTION : The Girl Beyond the Ashes by Sridevi . S. Kumar

She walked half the way huffing and puffing, through the entire grounds. It was a ten-minutes walk from the college to her hostel. The letters kept falling from that loosely tied bundle and she would stop, bend down and pick them up one after one. There was a slight evening breeze that would make it difficult for her to run around and pick the fallen letters and every time she would pick a letter she would shove her thick black wavy hair back behind her ears. She hid her sniffles with her already wet hanky and adjusted the long straps of her backpack everytime she was ready to walk ahead before the next letter fell.

She was a mess. A huge one. Her khol had spread and her liner was dripping through her cheeks and she would just wipe it off with her black uniform dupatta so that no one would notice. But anyone could tell that, she was broken , shattered and shaken.

She entered the quaint little alley of the hostel, drifting past room after another. There was not a soul anywhere, because it was the weekend.

She would love the silence of the vacant verandahs and mess halls on the weekends, but not this time. She really wished that at least her room-mate was there. Deranged by the thoughts that kept crossing her mind, she opened her room and insensitively threw her bag across the floor and rammed the door shut with a loud thud that echoed through the badly lit alley. She sat on her bed not letting go of those papers. It was uncomfortable, hard to breathe and she was sweating profusely from all the skin that ran over her body.

A loud bell shook her out of her deafening thoughts and she let go the grasp on the bundle of letters. She took her mug that was sitting on the table and made her way through the verandah to the mess hall. The mess hall was huge, and too bright for her mood. The quirky servers across the mess bay passed comments.

She just brushed them away. In fact she did not even look them on the face and she realized they had stopped making fun of her. Out of concern, one among them even asked, “Are you okay?”

She nodded and moved quietly to her favorite table. She dragged the chair and sat simply sipping the tea and all she could hear was voices. Voices loud enough to make her feel so invisible that the hostel warden had to touch her to actually inform her of something. She jolted up as if she had been woken up from a dream. The warden said, “Seems like it’s just you and me on the ground floor, if you feel scared to sleep alone knock on my room before 9.”

She nodded and got up in a whirl almost hysterically and made her way to the room. She was alone, she was literally alone. She took her Nokia 1100 and checked for the messages, any messages at all. It  was really creepy that there was not even one message, not a single forward. She felt like she was alienated for some reason and that the whole of Paulo Coelho’s universe had conspired against her.  She sat near her bed on the floor, grabbed the bundle of letters and started to read them. It was well past the roll call time and the warden knew she was the only one left today and wouldn’t make a big fuss out of it. She ignored the roll call bell and surrounded herself with the letters: The letters she wrote to him.

One after the other she read them and she started smiling. All those letters, every single one of them ended the same way. “I love you. Truly. Madly. Deeply.”

She wrote each one so passionately that she could sense the ghosts of her sincerity and love roaming around those letters. She was deeply hurt and offended to have found out that her lover exchanged these with someone else. His breach of trust had been common knowledge to everyone before she got to know. She had to end it. She had to end something that never existed in the first place. She asked him to bring the letters that she had written painstakingly as she was not good at speaking, but good at writing what she wanted to express. She asked him or rather cried out before him asking to return the letters. He did not hesitate and gave her away all of them except the one, which she would never ask back.

She did not even bother to shower after that day. She lay down her tears nonstop  but silent. She did not  time ticking away until the mess bell rang for dinner. She washed her face and checked herself in the mirror.  Her eyes were flooding. She decided to wait in the bathroom till they stopped tearing up, but every time she would look in the mirror, her eyes would fill up again like infinity pools. She decided to go back to her room and pick up a new hanky. She swooped one from the balcony clothespins and acted as if she had a bad cold that made her eyes well up..

She ate her dinner, washed her plates and locked the mess hall from outside before saying good night to the warden. She gave the keys to the warden and declined the offer of the warden to spend the night in her room. She had no idea why she didn’t feel an inch of fear walking through the verandah back to her room.

The room was closer to the bathrooms and toilets, a good thing when you live in a girl’s hostel. But bad because of instances of rat snakes and roaches often making appearances in the night. The hostel was too quiet. She locked herself back in the room. The two fans and two lights were switched on and the verandah was dimly lit. She picked up the letters and started reading them once again. She read them and smiled, her smile widening after every letter. She tied her hair up in a knot and dialled her mom’s number. She would call every night after dinner. Mom picked up and asked her to come the next week, as if she knew something was off. Moms work mysteriously; they sniff your worries even when you stay miles away.  She talked without letting that lump on her throat blow her cover of happiness. She talked to her about seminars, projects, and her roommate and then made an excuse of wanting to use the restroom to cut the call short. Mom might have understood or not but she was not ready to reveal anything yet. She looked at the inbox blankly before putting the phone down. There was not a single message and then one popped up. MOM: “Good night. I love you. Sleep well.”

She sat back with her pile of letters and started to realize a few things she had never understood before. She cried reading the letter where she wrote about her vulnerabilities. She cried again while reading the ones where she promised to have a life together under the million stars even if no one supported their relationship. It was not just the letters, those words, the beautiful literature that poured out of her pen in the faint light of the study lamp that he refused or never understood. She realized that those words were so sincere and pure that he did not deserve them anymore. Slowly the voices in her head started to rear up again. She began to lose herself in them and it was scary. She realized that she was falling prey to the voices and that she could not choose on what to do even though she was seeing her phone blinking and she could read the screen

“BFF calling….”. She did not flinch. The ringtone stopped and she was back in the real world. She knew she could not keep shuttling between the voices that muffled her senses and the reality of today. Her realizations were stronger than before. She went to the bathroom picking up a fresh set of clothes to shower. She was not scared of rat snakes or roaches. She was not scared of night or the darkness. She had seen worse for a nineteen-year old. Breach of trust, the violation of the code of love, unforeseen darkness that a single human could inflict: these were scarier. The fear that she might not be able to love anyone else was the first of all among these.

She always loved taking the shower in the evenings as the water will be really cold in the night. She quickly showered and changed into her night dress. The squeaky noise of the wet Bata chappal echoed through the entire verandah. The warden might have closed her room and the front gate, it was well past 9. She left her slippers outside the room as they were wet and just locked the door of her room. The crickets were loud enough to not make her feel alone. She closed her balcony grill and sat back with a huge exhale of breath. She knew what should be done. She needed some inspiration though.

It was sitting right before her shelf. She switched on the laptop and started to search for the movie folder. She had a pretty nice collection of them: ranging from Disney to Harry potter to a few Hindi classics and of course, all the nice ones of her own Malayalam. She was but aching for something to soothe her soul. Something that would just elevate her mood and make the voices disappear forever. She stumbled on ‘Jab we met’. She grabbed her stash of Lays lying round the cupboard and a big bar of chocolate that her lab mate had bought her for completing the records. She was ready to binge.

The movie, chocolates and Lays took 2 hours and 22 minutes to finish. She was not entirely convinced that the movie had elevated her mood. She lay on her tummy over a pillow watching the credits rolling on the screen and the letters scattered on the table. She looked at them and all that she could see was Geet telling Aditya to flush his ex’s photo in the drain. She could not do that. It was stupidity and it would clog her bathroom drain. She was inspired though. She needed a better plan.

She looked at her watch, it was around 1. 46 AM in the morning. Even the dead would be sleeping, she thought. She walked briskly in her small room. She had an idea. She searched for her matchbox that she had kept to light the lamp. She made sure that she had all the precautions. A bucket and a tiny one filled with water (in case of an emergency), her roommate’s thick blanket (in case of a fire).. She checked for visible signs of activity from the outside through all the available windows. She took her first work of literature and set it ablaze, one letter by one letter on the floor of the lndian latrine. Her pristine work of sincerity was love was nothing but ashes in moments and she flushed it all, cleaned the toilet.

The woman who came out of the ashes was her favorite one ever. 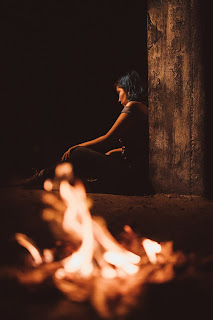 Sridevi is an engineer by education but a trainer by profession. She is mum to two girls. Sridevi is a Malayali, Tam-bram who loves to write.
Labels: Ashes Creative Fiction Indian Short Stories Indian Writers Inkspire