Smoke filled the sight outside Garima’s window. This was the third time this week, it felt like an unknown force was suffocating everyone, not just her. Wondering, if there is any possibility for the smoke chamber to end, Garima woke up – thinking what to make for breakfast. Pushing the curtains aside, she wondered how long would she have to wait to breathe fresh air.  By afternoon, the smog had started to clear a bit. Finally, her vision was clear – the source of the fire was finally visible.
The stench, reeking through tiny holes of the sealed window was unbearable. The smog had filled up the entire neighbourhood. No shop was open – after all, how could anyone bear to sit through this smog? Life was more important than money. Out of despair – Garima switched on her Television in hope for better news. It was the same old cascaded reporting – not one authority figure was ready to take responsibility for what had happened or even talk about doable, implementable solutions. As she switched off the TV, she wondered – is this what a farce democracy looks like? All talk and posturing – but no action? Too much noise, but no concrete voice?
She walked across to the window – fetching her binoculars to see whether the fire would show any signs of dying out. Far across and yet near – the landfill was still in flames. And through her binoculars, Garima now saw people walking in the landfill. Shocked, and wondering who would even think of going there – in this situation, she saw women with sacks on their backs – collecting some pieces from the landfill. Clueless on who they are – she googled – “Landfills”.
After an hour of browsing, she was overwhelmed. Pieces of information began fitting in like a jigsaw puzzle coming together. Solution after solution she read – was talking about source segregation. Sudden excitement took over; she could do something! Within no time, she had her waste disposal system converted into a waste management system. Her kitchen waste, all plastic/metal/paper, sanitary waste – got different bins. What was even more exciting was that with no place to go to – the creativity flowed in to make these bins from leftover cardboard boxes/bins with lids. It seemed like a ‘Best out of waste’ challenge. The day went by far sooner than anticipated. Feeling hopeful, she went to bed – thinking that if she could do it, so could others. The next day would definitely be better.

At 3 am, she woke up to loud sirens. Rushing to her window, she hurriedly looked outside with her binoculars. She saw four ambulances and the fire brigade  close to the landfill side. Her mind filled up with questions –
Did something happen to those women?
Were there more people?
Four  ambulances – would they be enough?
Will the fire brigade be able to squash the fire out?
Was anyone else as worried as I am?

After spending an hour walking restlessly, she gave in to sleeping on the chair, waking up only at 8 am. Without wasting a moment, she jumped in to see – the haze was worse than yesterday. Dejected, and worried – she decided to make breakfast and tea. She switched on the radio instead of the TV, hoping to hear some local news. And exactly as she had intuited, the morning show was discussing the landfill fire. She heard RJ Ravi say, ’10 people are feared to be dead, and 6 were evacuated last night’.
The fire brigade rushed to the spot when the local waste picker co-operative reported 10 waste pickers who had not returned home.
'Some of them are young mothers, whose children are anxiously waiting for them. For some of those children, their mothers are the only breadwinners of the family.’
The situation had become graver than expected. She wondered, and wondered. If segregation at source could solve the waste problem of cities – why weren’t people doing it? Because they were lazy? Or because systems don’t work? A feeling of absolute helplessness took over. All that kept her sane was that she was doing what she could. Deep down, she knew – her individual action would not be enough. It had to be a systemic change. Across the world, the garbage mafia runs the satanic landfill market. It is powered by a dark consumeristic society, that loves the out-of-sight-out-of-mind mentality. How could this vicious circle be broken? It seemed like an impossible Rubik’s cube. Could there really be a solution?
And as if the radio had heard her mind, she heard Jamnabai, a victim of the landfill fire was dead. She was survived by her 3-year-old daughter, Parijaat. With no place to go, the child would be in state care. It was assumed, that there were more such cases – but these were yet to be confirmed. Tears trickled, and Garima remembered her days of staying in Gyan Peeth orphanage.
***
Two months later, the fire eventually died out completely. When the smog had cleared out, the neighbourhood shops opened. People forgot about the landfill fire. Almost no one remembered the fatalities of the incident. A few talked about it, with pity and hollow emotions. Others spoke about the kacharawalis as if they were filth feeding on filth.
Garima couldn’t bear to listen. She was undergoing a metamorphosis of her own. She sensed it, that something was changing within. Walking towards the landfill, the site of fire – she observed how society blinds its own eyes. A local politician’s banner reading, ‘The landfill fire has left behind a treasure, don’t dishearten yourself. We will bring livelihoods to those who are into waste picking.’
Garima slowed down, and finally stopped staring at the only leftovers- Ashes. 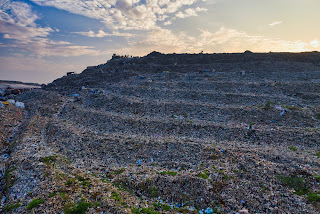 About the Writer
Hamsa is passionate about all things sustainability and eco-friendly lifestyle. She grew up watching captain planet, and dreams of a planet with equity for all. She truly feels that by walking the talk, we can contribute to the big changes we all aspire to see in the world.
Labels: Ashes Creative Fiction Indian Short Stories Indian Writers Inkspire