CREATIVE NON-FICTION : An ode and a Life Lesson by Sharanya Ganesh

In a suburban town of southern Tamil Nadu was a family with one daughter and eight sons. It was a set-up like a regular family of those days with many kids. However, the fourth child, a boy, grew up a bit different. When the others wanted to study or get hold of a government job all he was interested in was vehicles and mechanisms. Yes, he was unique from that tender age!

This interest took him on a quest to learn more about it and to getting trained by another experienced mechanic. A path that was quite different from that of his siblings.

Now, this young man fell in love with a neighborhood girl and they got married. Both in their early twenties, they took life in their most joyous and memorable stride. He began his two-wheeler mechanic shop and specialized in working with the giant Bullet Royal Enfield. A few years down, he was known to be the best bullet mechanic in town.

His family grew by two little boys and they were his life’s breath. He worked hard and took up a few small jobs like cleaning buses at night, working in his shop during the day. He made a savings plan of his own, first ten days of the month for the kids, then for school expenses, then for the family. He didn't value money as a material but he valued its worth to the purest meaning. Even when he was facing challenges, he always ensured that his family was happy.

Then appeared another huge milestone in their life when the kids had to join the school. He wanted his sons to grow into fine gentlemen, ace the world, and live a luxurious life. Every father would feel this and sacrifice everything for the betterment of the children. So did he and he approached the only Anglo Indian Convent school for his elder son. He made sure he had the finances and got the admission process done.

I could imagine what his dreams and feelings would have been then as he took baby steps for his son's great and rewarding future. Though it was a huge decision he was very confident of none but himself in knowing that  he could give the best to his kids. This positivity is what kept the family going.

After two years the second son too joined the same school. He had his challenges to get the financial affairs clear. People around questioned why his kids needed to go to such a school. Why don't they go to a school with lesser fees or even free government school? He had no reply except to affirm to himself that he would do it!

His kids finished school and successfully joined higher studies in their respective fields of interest, one took to mechanical engineering much like his dad’s passion and the other graduated with an MBA. The dad's dreams and aspirations were taking shape.

The dad remains the Hero of my story! Taking every step with a bigger goal in mind took him to much better places than society thought. He was now not alone a responsible dad but one of the most friendly dads the sons could dream of. He was with them in all their fun moments and cheered them to chase their dreams and assured them that he would be there to hold them!

As the millennium dawned his boys were the fine gentlemen that he had wished them to be and he was in his early fifties still owning the mechanic shop and having a bunch of permanent clients and a good circle of friends of his age and also much younger ones. Everyone looked up to him as a role model and fondly addressed him as "Anna" which means elder brother in Tamil.

Now it was time to grow the family with the inclusion of the wives of the two sons. Back to back wedding bells in two years and two new members into the family... Of which I am one.

Parents In-laws are usually a very different breed in an Indian household, but I was fortunate to get second parents in the form of my in-laws in every sense. The day I called them Amma and Appa as I did my parents they also took me to be their daughter. My dad-in-law pampered me to the core. He always supported me even in the silly quarrels I and my husband had! He still took care of the two-wheeler shop. Though my husband and I lived in Chennai, we visited our in-laws every weekend.

When we had to move to Thailand four years post our marriage with two daughters, we wanted to take Amma and Appa with us because that would be a change for them and it was their time to enjoy with their grandkids. It was a huge task to convince Appa to take a break from his shop and take him to Thailand. I did not realize then that all of this had a reason. But we were all happy and settled in the new place.

New people and new cultures were all enjoyed by him. We saw that happy grandfather, a relieved father, and a relaxed husband after many years of challenging hardships! My elder daughter joined school and Appa and me would walk her to school and pick her back. On these short walks, we would discuss many stories and he always left me with a new lesson for life. Whatever you have read so far  were from his own words on many such occasions.

So, we visited India for a one month vacation at the end of July 2017. My husband did not get such a long leave so he decided to accompany us – the kids, parents, and myself to Chennai and return to work in a week. He was to fly on the 13th of August and Appa, my brother, and I went with him to the airport to send him off!

The next day we decided to do the grocery and vegetable shopping and Appa and I did it as always. It was a humid day, we were tired at the end of shopping and we decided to buy some chilled fresh juice and take it home. So we hired an auto and reached home around 1.15 pm. Since we were thirsty we had the juice first.

I went into the bedroom to feed my younger daughter and Appa and Amma were in the living room, Suddenly Appa felt nauseated and he tried to vomit in the toilet adjacent to the living room. I called Amma and she came to me and said it was nothing maybe the juice was too cold for him.
She went out of the room. But within the next few minutes she was screaming.  I run and found Appa in a half-conscious sitting pose. I tried to call out my neighbors for help and few came. I called up the 108 ambulances for emergency services and finally, in an hour of all this chaos, the ambulance authorities arrive and declare that Appa is no more!

Before I could accept the fact, Amma had already fainted, my two kids were crying and I was shattered. Between all this, I had called my husband who just landed in Thailand, and told him the devastating news! I hear no reply from him for a few seconds.

Then, a few good friends of my husband reached home and started to get the formalities done and make the arrangements to take Appa to our native village after my husband got back from Thailand. The next day we waited for my brother- in-law to arrive from another country abroad.

An entire era of dedication, commitment, and the roots of a family burnt down as Ashes in a fraction of seconds. We could do nothing, but he left us with the biggest void. The ashes from his soul has something to tell us- “Think Big! Be strong in your heart and mind and Always follow the righteous path, and Success will follow you!” 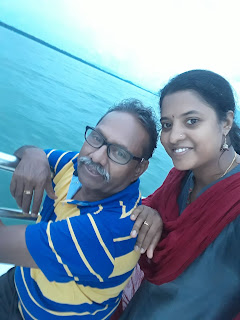 About the Writer Sharanya labels herself a complete work in progress on the journey of life. Staying in three different countries made her understand things from a larger perspective. Looking deep into herself and improving every day for the better has been a task that she enjoys and this gave birth to her third baby her blog at http://www.soulfulsimple.com/
Labels: Ashes Creative Non-Fiction Indian Writers Inkspire