Someday, I want to become like my grandfather. He was a lecturer by profession and managed other work too. If the windows at home needed fixing, he became a carpenter. If the switchboard gave us trouble, he became an electrical engineer. Along with all this, he was also a national level Volleyball player.

Acharappa was known for his name. His behaviour was perfectly parallel to his name. His name is Shankara Chari. I call him Acharappa. My great-grandmother used to say that all his 13 siblings (seven brothers and five sisters) were jealous of him as he was an ideal son to my great grandparents. Just like (or maybe unlike) other kids, I grew up assuming that Acharappa will always be there and would stay with me forever.

He had to walk 6 kilometres to reach school, and walk back home with his brothers. His team’s achievement with volleyball was once noticed by a newspaper agency and mentioned in the newspaper. From then onwards, he began to play the game every day, the seasonal changes never affected him. Apart from this, he mastered the game of carom board as well. No one at home could win against him and that’s why I was in his team always.

I and Acharappa spoke in English because he knew that in school, I never spoke English. (I also spoke to him in Kannada whenever I ran out of words) he, Amma, and Ajji conversed in Telugu. All the others staying with us also spoke Telugu. So, I could listen to three different languages daily.

Acharappa’s voice changed as per the language he spoke. When he talked English with me, he sounded soft and it melted like ice cream. I believed this perhaps because he was talking to ‘me’. While he spoke in Telugu with Amma or anyone else, he sounded like an alarm clock – on point. When he spoke with people outside, he had a deep rough voice though appealing. But with me, it’s forever been fruity.

He’d tell stories about how Amma bunked college, how Ajji managed to go out for movies with neighbours and get caught in the evening. I used to hate my sister-in-law because she restrained me in almost everything I wanted to do. While I cried about this, Acharappa used to sing for me.

Athe matthe esara katthe … (Sister-in-law is a donkey) and I don’t remember what he said after this but I’d stop whining immediately. *tears of joy*

Ajji was a bit of a miser. Acharappa never liked this, he always said ‘Gandhi class ticket madri pravarthinchaku’ to Ajji. (Don’t behave like cheap tickets sold at the theatre.)

As soon as I reached home, I had a habit of sitting on his iron cot where Acharappa removed my shoes and socks even as Amma yelled at me for making him do my work. The half-litre dodla which we bought had to wait for me. He told me once, “Drinking milk will make you a strong girl!” I continue to drink raw milk without even boiling it. Others might find this disgusting, but for me, it’s better than the fancy coke bottle sold out there.

I was in grade five, maybe six when he decided to unveil the terrible story behind my father’s death. I myself only remember him as a drunkard who had beat up my mother every day. He passed away due to an accident when he and Amma were returning home from a temple. I was still in Amma’s womb at the time. His death brought a newfangled situation - Amma didn’t know whether she was supposed to be happy that he would never trouble her anymore or be sad that he had left her.

Soon after this mournful situation, Amma started recovering. Acharappa used to say, “Neenu amman tharane dhairyadinda irbeku.” (You should be brave just like your mother.) That was when I realized that I have the best people with me who could never be replaced. I had to change myself, I stopped being lethargic and participated in every possible opportunity that came my way. The management of LIC, India recognised this and appreciated me with the school's all-rounder award. I can never overlook that charm in Acharappa’s eyes when he saw the trophy.

The cutest thing about him is the love letters he’d written for Ajji long ago. His father was a strict man, who could not tolerate love. But Acharappa turned out to be a lover boy. He used to compare my Ajji to actress Saroja Devi.

It was love at first sight, says Ajji. He had come home all the way from Thally in Tamil Nadu to give the rice bag to us; every year his father sent us twenty kgs of rice. He wrote many letters to Ajji and she always escaped saying they were from her classmates. Strangely she never wrote back to him but they managed to meet once in a while.

Ajji never told us about the content in those letters but she said that all his love letters ended with, ‘Nee Premi Shankar Babu’. (Your love, Shankar Babu) The most celebrated actor Shoban Babu had become Shankar Babu to match with Saroja Devi. Although his father opposed love, Acharappa somehow managed to marry my Ajji. No one knows what plan they made to get married. The green bangle set which was his first gift is still locked in Ajji’s cupboard – treasured!

A quality that he always believed in, and had asked me to have was tolerance. He loved the smell of old dusty books and magazines; this reminds me of the old dictionary at home. He owned many books, most of which were based on medicines. These books were lost when the family shifted from Thally to Bangalore.

His iron cot is a priceless object at home to which all of us are emotionally connected. It is now rusted, but Ajji wants it to be painted twice a year, on his birthday, and the day he left all of us with only his memories. It looks very elementary, with the usual bed frame, without the fancy mattress but has a bed that is covered with my Ajji’s saree. This saree cover is also changed often, but it has to be covered with her sarees only.

Acharappa was fascinated with his watch. I regret destroying it when I was in grade 2 maybe. It was in fashion those days, he said. The needles shone like silver on a bright polished plate; it had a vintage belt. He loved antique watches but he had lost his collection. He always wore a grey safari suit whenever we went out. Back then, on some days I used to sit on his shoulder and other days I walked beside him holding his not so fragile hand. I still remember staring at his wrinkles and tanned skin, the discomfort he had in his veins, every painful detail about him would bring tears in my eyes.

Another thing that Acharappa liked was his shoes. My brother-in-law used to wear it for some days after his Acharappa's eternal rest. They were made out of leather. It was big.

My matrilineal great grandfather was a singer and Harmonium player, but this Sa re ga ma pa talent was never seen in my Acharappa. I can recall getting yelled at by him for singing ‘choli ke peeche kya hai’

It was all Acharappa’s skills and efforts in organizing his three sons and two daughters as successful people. One of his sons passed away when they all went to a temple in north Karnataka. This misfortune made Acharappa hate god. He died an atheist. However, once Ajji took me to his room and I happened to chance upon something that betrayed how complex he was. She showed me a wooden locker that had become a home for spiders; there was dust all over. It seemed like the Arundathi movie for once until Ajji unlocked the case. There were a few books in it. He had written a Mantra more than 25000 times.

These aren't all. There were so many books, photographs, and rudrakshis but your Ajja threw them all - she said with unexpected melancholy. Tears surged down from her eyes, thick tears. I know Acharappa’s soul is always alive in her hidden lament.

Amma always told Ajji not to talk about aging, not to remind him that he is getting old. The ridges were worry lines still, they always accompanied him - whenever he grinned it seemed as if his wrinkles also grinned with him; when he scowled his wrinkles scowled too. All those wrinkles showed his journey for seven decades of his life and that’s why no one ever felt like erasing these.

I realized he was growing old. He had a habit of making me walk on his backbone so that the pain reduces. Even if he was crazy about me, he never spoiled me with his intense affection. But as the days passed and he was growing old, I could not see the overly happy face, he was tired half the time. That face has loved, had been in pain, has seen the seventh heaven and on top of all, it is the face that has survived.

I was in grade ten when I contracted dengue. Unfortunately, during the same time, he had a heart attack. I was shocked and upset at the same time, of course, the whole family did not let him deal with this on his own. I was still worried. It took me almost three weeks to recover from dengue.

Before I finished my SSLC, he had suffered through this twice. It was my computer science lecturer's birthday, on August 1st (2017) where I was bubbling up with joy having cake, laughing, and appreciating my favorite lecturer. Suddenly, Amma came to college to take me home. I had been asking her what had happened, she said absolutely nothing.

We came home and I saw Acharappa lying there with garlands, surrounded by people crying for him. I could not process it. But I accepted the fact that he is no more and decided to console my mother.

Not even once did he complain about his attacks, he just knew how to live for his family, and more so for ‘me. I saw so many people coming from distant places, there were so many because he had earned their respect, he was always putting the needs of others before his own self as I have seen and heard from many. I realized that every happy moment I experience will be taken away someday, so it is essential to cherish every single moment. All I was left with was dust and ashes. The intensity of the wind swept away these too. Now, in the end, I have memories.

Acharappa’s old iron cot, his marks cards, the pictures, the lost love letters, his books, his favorite food, his beloved family, his safaris, his footwear, the watch he wore even while sleeping, his values and ethics and what not? Everything reminds me of him, he has always seemed like the real strongest man to me. 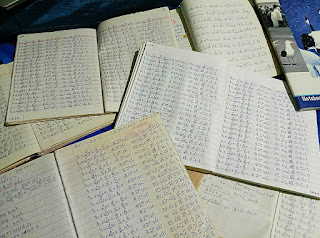 About the Writer:
Eshwari.R is figuring out writing. She writes on some nights and on some days she tells stories. She is A 20-year-old student who enjoys stalking people in government buses. Eshwari blogs
at https://wholesomecollections.wordpress.com/
Labels: Ashes Creative Non-Fiction Indian Writers Inkspire