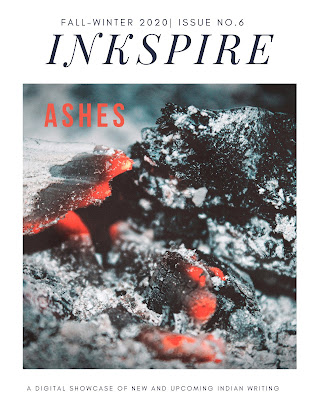 Welcome to the sixth edition of Inkspire and the final issue for this year - 2020. A year that has left us all overwhelmed. A year that has swept us up in a tidal wave of crushing loss, with the rare piece of joyful news to break the absolute tedium of sorrow. Yet, I would like to wager that we are still here and therefore, we still continue to resist, to adapt and stay steadfast in our belief in hope.

The theme for this issue is - ’Ashes’. A curious choice perhaps after five other issues that celebrated Hope, Love, Feminism, Taking Chances and the Warrior Spirit. But I believe that this theme is a reflection of where we all are as a community. Some of us have suffered losses so intense that the ashes are basically a symbol of our grief, a literal representation of the dust that our loved ones and our dreams have been reduced to. Some of us who have overcome extreme challenges to attain a modicum of success feel that we have risen up from the ashes, like the mythical phoenix. For me, this theme is an open invitation for writers to interpret it in the manner that serves their writing the most. And judging by the immense number of submissions that came in, many writers saw it the same way. This was also the first time that I had to send out a number of letters to those whose writing was not a fit for the issue. If they are reading this, I hope they rise from the smarting ashes of ‘rejection’ to submit again for the next edition.

Kuldeep Rai opens the issue with poetry that reminds us that there are men who yearn to be perceived as more than what they are moulded into by society. Supatra Sen’s verse explores life in the new normal and the urge to rise up once again. Barnali Sikdar’s Baghjan gives voice to those who are voiceless and  fleeing a future that is going up in flames. Kanika’s One More Mistake is about the spark ignited from the embers of a dying relationship. Akshi Khandelwal brings the lyrical grace of dance to ‘Ash Body’ that describes the poet’s experience in a dance studio. Maansi’s poem, ‘The Weight of the Lost’ is a lament of someone who regrets taking his wife for granted and now feels the burden of his actions and his loss. Shilpa Sasidharan's Bell Jar takes us through the journey from anguish and heartache to rising up again while holding onto hope. to We wrap up the poetry section with Nazir Ali’s eloquent verse that interprets the theme through the tragedies of contemporary India.

We open Creative Nonfiction with Ramya Kirtana’s piece, ‘Her name was Suryakantham’, a short ode to her paternal grandmother. Sharanya too writes an ode to her father-in-law, one that holds a life lesson as well. Eshwari paints a colourful portrait of her grandfather and writes about the great influence he had on her life. Archana recounts a harrowing tale of being sexually harassed on a train and how it left a shadow on her life.

Next we move onto the featured writers.

Shweta Bhavana cleverly uses a myth to illustrate the current state of professional relationships and the blurring lines of etiquette.

Chitra Yugesh does a deep dive into the significance of ashes in religion.

Swathi writes a personal narrative of rising above challenges that left her lost and overwhelmed.

Sireesha interprets the theme through the lens of travel and a visit to an English castle.

Supraja pens an eloquent exploration of her identity comparing and contrasting it with her dreams of the past and her reality while emphasizing the need for the pursuit of mental health as well.

We open our fiction section with Hamsa Iyer’s Line of Fire - a story highlighting the severity of the trash problem our planet faces. Sridevi.S. Kumar’s ‘Girl beyond the Ashes’ takes us through a teenager’s anguished heartbreak. Anusha Veluswamy paints a vivid picture of a family shoved into poverty and trying to cope in a landscape vastly different from the one they are used to. In a ‘Circle of Fire’ - Pavithra Radhakrishnan writes about a life hemmed in by fiery boundaries both physical and metaphorical. Shruti Kapoor writes in fluid prose about a granddaughter processing her grandmother’s final journey in, ‘One with the Water’. And in ‘A life with no regrets’, Ramya Vivek tells us the unconventional story of a Dad who raised his daughter all on his own.

The featured writers in this section spin quite the takes on the theme. ‘The Journey’ by Tess takes us through the memories of a mother who has just received some disturbing news about her son.

Maithri’s ‘Like a Phoenix She rose’ tells us the story of a newly-widowed woman who is stepping into a new life created from the ashes of her old one.

‘An Urn of Memories’ by Indu explores the funeral rites and aftermath of an elderly man as experienced by his ten year-old granddaughter.

The Caretaker’ by Geeta explores the themes of grief, humiliation and repentance. Radhika celebrates a life well-lived through the perspective of a sister’s grief.

As always, we have a mix of writers who have tried their hand at writing before and also those who are sharing their work for the first time. I would love it if you would show them your love and encourage the writers whose work you liked by leaving them a comment or by sharing their piece on your social networks.

As this seemingly never ending year slowly rolls to a close, I hope this issue with its myriad interpretations of the theme brings you some comfort and maybe even some inspiration.

As I was editing the issue, I experienced loss - my grandmother passed away of old age and at peace. I dedicate this issue to her as I sit in my grief even as I celebrate her rich and full life.

Thank you for reading. 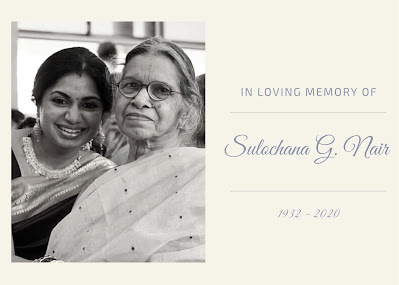