"Ashes- the grey dust that settles in one's hearts,

Slowly, as youth wears away,

The remnants of the fire

That burned through the yesteryears.

Waiting to be lighted,

To be the burning fire again." 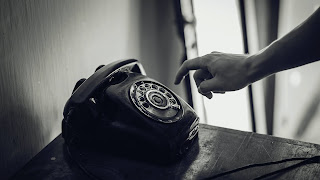 Mary teacher placed the handset back in its holder and paused for a moment to stare into blank space.  The fifty-six year old retired school teacher was trying to recollect and comprehend what she'd just heard over the phone. It was her only son Arun's best friend, Rohit, who had called.

"Amma", he had said, "please don't panic. Arun has had a minor accident.  His scooter bumped into a parked car. Amma… are you there?"

A gazillion thoughts were flooding her mind and she was too lost in them to reply.

"He has a minor leg injury.  A small fracture.  Would you come to the Town hospital with me? He wants to speak to you."

"I'll settle everything here and pick you up in an hour. Won't you be ready then?"

"Yes mone. I'll be waiting for you." She was trying hard to evade the thoughts of worst case scenarios.  She prayed silently as she sat down on one of their dining chairs. An unfinished table runner, which she'd been embroidering lay before her on the table.  She roughly checked her attire- a white cotton saree with a soft blue border and a matching blouse. Her late husband Mathew Chettan had always insisted that she should always be well groomed, even if it was for a gloomy day at home.  Her greying hair was in a neat bun and she always wore her black rimmed spectacles.

She looked around the house - the very same house which was built with a lot of dreams, almost twenty five years ago.  A glass showcase, placed near the dining table, held many framed photos- memories of  a family growing in love.

She was laughing in their wedding photo, wearing a white Kanchipuram silk saree and Mathew Chettan looked handsome, clean-shaved and neatly dressed in a groom's suit. Both of them were wearing their wedding garlands and holding floral bouquets.  They were standing at the entrance of the church, posing for the wedding photographer.

A thirty-year old Mathew Chettan and twenty-eight year old Mary teacher were colleagues at a private school in Pala and already acquainted when they got married twenty eight years ago. It was not a love marriage. When none of the marriage proposals, which came for her, worked out, it was she who introduced her colleague to her family. He was a good friend and she was not afraid to express her thoughts.

"When did I start fearing the unknown?", she thought aloud.

Both the families had happily consented to their wedding with a 'why didn't we think of this earlier'. And, thus they began a life filled with dreams and aspirations.  The initial happiness dimmed with the realization that she would have difficulty conceiving a child.

"That," she remembered, " is when I started fearing disappointment."

She glanced at a family picture of theirs. Arun, a chubby baby dressed in baby dungarees, was only a few months old. She was dressed formally in a saree and Mathew as in all his photographs, formal shirt and pants. He was always clean shaven and his hair was always trimmed.

Mathew Chettan was always a supportive husband. He encouraged her to wait for a miracle before thinking about anything else. Surprisingly, she conceived Arun after a year's wait.

The family photo of when Arun was a year old was taken on their housewarming day.

It was Mathew Chettan who suggested that they build a house of their own.  She stood by and supported him in his every decision.  Thus, their house was meticulously designed and built. A two storey house with four bedrooms - two on the ground floor and two on the first. It was she, who suggested that thinking of what if Arun decides to settle with them after marriage. Everything from the white floor marbles to the cream colour for the walls were thought and rethought.  Both of them enjoyed gardening and they planned a small yard around the house with a small kitchen garden at the back.

There were many pictures of Arun growing up. Looking at them she remembered how her fear of the unknown grew stronger.

Arun studied in the same school they taught in. He was 10 years old, when one day she was suddenly called out of her class for an emergency. Arun had had a minor cut on his forehead and had to be taken to the hospital. Mary teacher remembered how tense a small cut on her dear son's forehead made her. It was his father, who supported her in times like those. She would get worked up whenever Arun had a fever or cold, and hover around him day and night till he was completely well.

The photograph of a young man on his graduation day reminded her of how sensible a father her husband had been. Arun had not only inherited his good looks but his courage also.

Arun was a bright student at school and college. She had always thought he would end up being an engineer or a doctor.  It surprised and even brought her a little disappointment when he announced that he wanted to study Business Administration and eventually become an entrepreneur. Yet she didn't want to discourage him. So with Mathew Chettan’s support and  encouragement, she helped her son take such a step in life.

Their last family photograph together was taken a few days before Mathew Chettan’s sudden demise due to a cardiac arrest.

Arun had bought a new camera with his own earnings.Arun was as tall as his father and resembled the Mathew Chettan whom Mary teacher had met years ago. Mathew Chettan had aged well and so had she.

Mathew Chettan’s sudden demise was a shock for both Arun and her, but they had each other. She felt her old fears return as she thought of Arun.She feared if it was more than a mere fracture like Rohith had told her. She was so lost in her thoughts when a car honked outside. She hastily found her house keys and went outside.  As was her habit, she checked the doors twice before going out to get in the car that was waiting for her outside the gate.

"Amma… please don't worry," Rohith reassured her that there was nothing major to worry about.  Rohith was Arun's friend since childhood and she knew the young man like she knew her own son. The lean young man in his late twenties.  He and Arun would easily pass off as siblings.

"Hmmm…." She could not get her worries off her mind. Arun was always a careful driver.  Of late, some financial issues were troubling him. He had mentioned something about certain loans which he couldn't manage. The Covid-led changes in the market had affected him further. She was silent throughout the journey and she could see the concerned look on Rohith's face as he led her through the corridor to the room where Arun was.

Mary teacher heaved a sigh of relief when she finally saw her son. His fractured leg was in a cast and there was no other major injury other than a few scratches on his cheeks and arms. She sat by his side and put her hand on his. That's when Arun started sobbing.

"Amma… I've lost everything," he said. He went on to say how his company had lost major projects during the lockdown period and how the bank had confiscated their office, as he couldn't manage the loans that were pending. He confessed of how he had even thought of ending it all.

Mary teacher listened patiently.  She knew that she now had to keep her fears aside and take a step for her son. She had to be his guide and support, as he would have to start rebuilding his business from the scratch. She couldn't imagine her son becoming a failure in life and she wouldn't let that happen at any cost. She smiled gently at her son,  as Rohith watched them, standing by the door.

Arun revived his business after much struggle, with his mother's support.  She thus taught herself and him to overcome the worst fears in one's life and move forward courageously, whatever may come.

Tess is a mother of five, currently residing in Kochi. Writing for her is therapeutic and gives her the kind of satisfaction that nothing else in this world can. She is someone who writes in her head, even though she doesn't pen down everything that she does.