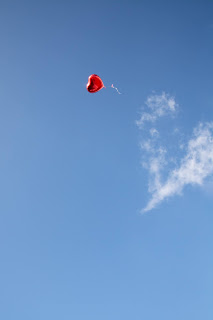 Katya sat up with a start, worried she missed the alarm. Squinting for her phone at her bedside, she heaved a sigh of relief. She had an hour still, and debated on burrowing under the soft sheets again.

Her eyes blinked back into their natural round circles and she willed herself to step off the bed. Shuffling to the window, she drew the taupe curtains aside and peered as the concrete jungle rose to meet her eyes. One could not tell the waters from afar, the curtain of gray sweeping over land, and the sky reminded her of a large heavy comforter.

She glanced back at the steel vase on the table, and her shoulders dropped with the weight of her thoughts. Four days. It has been four days, and she shuddered as an errant cold draft hit her bare shoulders. The phone buzzed and she walked up to it to read a short text light up the screen

Throwing the phone on the bed, she headed  into the shower to scrub some of the grime she felt within. The hot water stung her face and she let her tears mingle and wash into the city that once belonged to him.

Never settle, Katya! Their last conversation screamed in her head, his dark eyes flecked with gray, as he alternatively begged and threatened her to not settle and throw away her dreams. You are settling! How can you do this to yourself?

The conversation refused to leave her head and she shook her head vigorously, in the hope that she could get rid of it.

Fat load of good it did to you Neil. She screamed at him angrily, as she threw her clothes on. Phone and bag in hand, she gently lifted the slender vase and contemplated on holding it or placing it in the bag. Prudence won as it was a long walk and she had to be careful.

Neil was a man who walked to his own beat. Not that it made him special, at least not in his immediate family, coz they all did. They were the odd ones on the block, and with time, the siblings owned it enough to make everyone envious of how each lived their life.

A hobby that became an obsession which in turn took him to the wildest of places, photography made Neil who he was. Always with a camera in hand, he was consumed with capturing a perspective of the natural world that was so real it took the observer within the art. Very few had his gift, and he knew it. Medals and awards were not a deterrent to sway him into settling down or to commercialize his artwork, and so he spent months at a time in the jungles.

His next stop would be jotted by the postcards he would send home. Jottings, quotes and little drawings of vignettes of life as he saw them from where he was. There was always a lesson in there, a teaching, a piece of advice, an anecdote that connected dots of doubts and an answer to a question they didn't realize they had. He would talk about never settling down and to always question.

Make mistakes. He implored Katya the one time she lost her nerve and decided to play safe.

Make mistakes. He would urge them to not just sit on what they learnt but to go out into the world and use it, showcase it! Figure out why you learn what you do. Why is it that you learn a particular way, is there another way to it? Maybe we must unlearn some to learn more. Fudge it so badly that it becomes yours, be willing to let people laugh at you, coz once they do, the pressure is off to build higher. The bar is low. The bar one day will cease to exist.

Remember the dash? The dirt, the maggots, the ashes, the nature that we all become a part of. Yes, is not that spectacular? That we are given this one life to do the most we can and to experience it as much as we can, coz one day the blackness and the gray will make us a speck, again.

Like the gray specks in his eyes the girls could see even through the poor video call the last time he connected from the jungles in Nicaragua.

Just as she turned the corner, she saw Sasha being Sasha and walking around without proper warm clothing like she was made of steel. Katya walked up and sat down on the flint colored bench facing the waters. Unperturbed, Sasha turned, and their eyes met. Without a word, they hugged and held each other for a long time, alternatively sobbing and consoling with murmurs.

The sun was breaking through the gray horizon and the pier was waking up lazily to a busy weekend. A nosy seagull left its group and came close to the bench, fearlessly staring at the couple. The air was eerily still, the trees bare and the pier empty. The waters lapped against the pier, a hollow ringing of depth and brevity as the sisters sat in a bubble of silence.

Katya replied with a resigned, “Like always Sasha, what do you expect?”

“But seriously” Sasha, half turned to look deep into her sister’s eyes and noticing the same gray specks that showed up when she was emotionally strung, “How could this have happened? I just don’t understand.”

“He didn’t settle. He wanted to be free, so he did what his heart told him. Aimed high and risked without a care in the world”.

“I miss him” Her voice breaks as she covers her face in her palms.

Katya sighed, and pulled her little sister closer to her. Immediately realizing how cold she was as her skin warmed against the down jacket. Huddling against each other, and lost in their memories, there was as much strength as there was defeat in that moment.

Katya gently pulled the very cold vase out of her bag and straddled it. Sasha looked down and placed her hand on her sister’s. They walked up to the water’s edge. There was a short steep edge to get down the pier to the gray waters, and they made their way down. Standing there surrounded by the gray waters, the foggy sky, and the stony silence around, with their fingers turning ashen in the cold, they looked vulnerable. The weight of the responsibility made them look smaller.

Katya lifted her arm and waved instinctively, like she always did.

Sasha blinking an errant tear whispered “Bye Neil, write soon from where you go” like she always did.

The sun broke through the grayness around, and unexpectedly, the pier came to life. A toddler ran across with a balloon, a couple of joggers powered through, an elderly couple watched the sun rise, and the cyclist pedaled her way down the boardwalk.

Radhika is a multipotentialite and has donned many hats to success over her adult life. She is a lifestyle blogger and has been published in online magazines and runs a popular blog. She is rekindling her interest in writing fiction and plans to hone her narrative skills through education and practice. Radhika is an almost empty nester, and her identity and pride comes in the form of her three kids who are off creating a success of their lives. She believes constant change and reinvention is what keeps her alive and relevant. She lives in the DC area with her husband and dog and hopes to travel extensively once the pandemic is behind her.

This piece was written as Radhika's  final assignment for a six-week Creative Fiction writing workshop.