FEATURED WRITER : The significance of Ashes by Chitra Yugesh 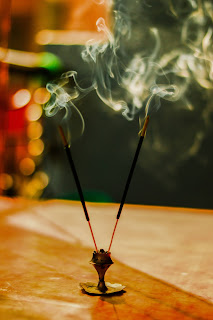 Lord Shiva, known as ‘The Destroyer’ is one of the principal deities of Hinduism and   the third god of the holy trinity of Hinduism. Shiva is often depicted as sitting in a cremation ground with his unclad body smeared with ashes. Ashes best symbolize the mortal nature of human beings and its association with Lord Shiva as it cannot be burnt any further. The ashes smeared all over Shiva's body are a reminder of Shiva's association with the cremation ground, where the dead are burnt to ashes. In the Hindu scriptures, Vibhuti or the holy ash is the white ash of the wood that is burnt from the sacred rites involving fire. The association of Lord Shiva and holy ash is a reminder of the nature of life - that our physical bodies are not permanent or real and one day we will all be reduced to ashes.

In order to honor Lord Shiva, Vibhuti or ash is traditionally applied as three horizontal lines across the forehead and other parts of the body. The three lines represent the three eyes of Lord Shiva as well as his threefold power -  of will - which denotes the removal of pride, knowledge - the removal of ignorance and action which signifies karma. The holy ash is meant to protect man against all evil forces and when applied to the forehead it is meant to destroy negative thoughts and qualities. When we apply vibhuti to honor Lord Shiva it is a reminder that everything in this world is temporary and eventually all of our lives will be nothing but ashes. Ashes symbolizes the fact that Shiva controls death in the physical world and since birth and death are complementary to each other, Shiva is seen as the master of all birth and death.

‘Ashes to ashes, dust to dust’, is derived from the English Burial Service, the text of which is adapted from the Biblical text. In the Christian faith, Ash Wednesday or often called the “Day of Ashes” marks the beginning of Lent. The ashes are collected from burnt palm branches from the previous year’s Palm Sunday celebration. The ashes are a symbol of penance and  symbolize death and repentance. It is believed that ashes are similar to dust and the human flesh is made of dust and clay. Therefore when a person dies and his corpse decomposes, it returns dust or ash. On this day, a person receives ashes on his forehead by the priest or the pastor who will dip his fingers into the ashes and draw a cross pattern on the forehead. The belief is that from dust you came and from dust you will return. The ashes can also be sprinkled over a person’s head as a sign of repentance. It is believed that by receiving the ashes on Ash Wednesday, one is sorry for all their sins and the season of Lent is used to correct their faults and purify their hearts.

Ash Wednesday and the Hindu festival of Maha Shivaratri (celebrated annually to honour Lord Shiva) are holy solemn days and invite people to reflect on their lives. Both these days involve ceremonies where ashes are applied to the forehead. Like the cross applied on a person's forehead on Ash Wednesday, on Shivaratri, devotees apply the holy ash on their forehead as three horizontal lines. The belief is that by the smearing of the ashes, their sins are destroyed a person is absolved of all past sins.

Ashes are also often a poignant reminder of one’s mortal remains. The eastern philosophies believe that death is a part of the cycle of birth and rebirth. In the Hindu religion, cremation is the method of reducing the dead body to ashes by fire. Thus by burning the body it is believed that the soul is released from its existence on earth. After the cremation, the ashes and remains of the deceased are collected in an earthen pot. The final act of departure is when the ashes are scattered  in a sacred water body.  The immersion of ashes into a flowing river is to allow the soul to have a smoother transition into the next life. Another reason to immerse the ashes into a flowing river is so that the soul gets salvation and all his sins are received by the river and the body gets salvation. When immersed into a holy river, all the sins are believed to be pardoned.

In conclusion, we see that ashes have a very deep and meaningful significance in both the religions of Hinduism and Christianity.

Chitra Yugesh is a fitness enthusiast and a yoga teacher, a lover of cakes and all things sweet, an avid baker and a reader! Obsessive taker of road trip pictures and a follower of baking ‘gram posts.

This piece was written as Chitra's final assignment for a six-week Creative Nonfiction writing workshop.