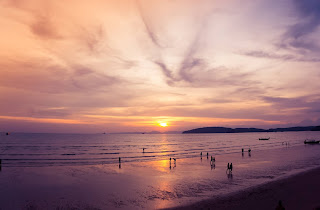 Savitri was tired. Not the kind of tired when your bones ache, knees creak and senses numb.

No, this was different. So different that she found herself going to the travel agent on an overcast day to book a ticket to Dubai. Passport? Return? Hmmm… One way, she said to the girl with the fluorescent nail paint.

‘I am going to Dubai,’ she announced.

‘You heard me right.’

‘We’ll go during Diwali.’ He pronounced. His was the last word. As always.

But Savi was not herself today. ‘I am not asking you, just informing you. I. AM. GOING.’

‘Oh really? You need to book a flight. And where’s the money honey?’, he smirked.

‘I have some money of my own. Don’t worry, will not ask you,’ she smirked back.

‘Really? You are 12th passed, have never worked in your life…so where did the money come from?’ It was not clear if he was offended or curious.

‘You are right. I have never worked in my life…for money!’

Just couple of weeks ago, he had insisted on celebrating their silver jubilee wedding anniversary at a popular hotel. Menu was the staple Sweet corn soup, Buttery naans, Creamy Palak paneer, Alu gobi, Tri-colour pulao, et al. The dessert counter had all the traditional Indian sweets: Gulab jamun (but of course), Chocolate burfi, Cham-cham and the eternal favourite vanilla ice-cream. He had chosen the menu. She could have easily managed cooking all this and more in the comfort of her kitchen, her favourite spot in the house. But it was his way or highway. He had even bought her a silk saree in his favourite bottle green colour with a maroon border. Her saree rustled as she walked around with a curated smile. She saw him holding the forte cracking ribald jokes as his cronies from office lapped it up. He was cracking the same joke for the umpteenth time. She wondered whether they were laughing at his jokes or at him.

‘So, what is the secret of your happy marriage?’

‘Hard work, hard work and hard work. I work damn hard so that my wife can be enjoy and be happy.’ And Rakesh laughed at his own joke.

‘Oh, come on, She works equally hard, I am sure,’ said Mrs Swamy.

They clicked happy pictures, smiling their best, which he promptly uploaded on FB and spent the next day counting the ‘likes’.

‘You are so lucky,’ said her numerous relatives. ‘Not everyone is blessed with such a loving and successful husband,’ they concluded. So, what if she was the second wife, he was from a ‘decent’ family, his start-up was doing reasonably well, he belonged to the same caste and that’s what mattered at the end.

Sameer was of a different caste and her uncles and aunts downright rejected the idea of a marriage. ‘There will be a scandal in the family, in the society. Our daughters will not get suitable grooms.’ they shrieked. Savi looked at her mother with imploring eyes. Her mother looked back at her with resigned eyes.

‘Inter-caste marriages can get messy if one does not have the backing of relatives and society.’

If only her father had not died prematurely, she could have studied further and may have married Sameer, who knows. And she shed silent tears as she looked for her father in the star-studded sky.

When prospective groom No 5 rejected her, she felt completely devalued. And then Rakesh’s family extended a proposal. Her Uncles and Aunts promptly said yes.

‘Please don’t say no.’ begged her mother. Have the belief that everything happens for a reason. A good reason’.

‘If Appa was alive, he would have never allowed this to happen,’ said Savi in a tone mixed with bitterness and a longing.

Rakesh just shrugged it off as a passing fancy. Then one day he saw her taking the help of the house help to lower the blood red Aristocrat trolley bag from the attic. “What’s going on? Will you stop this drama?”

‘I told you that I am going to Dubai to spend time with Aparna and Pooja.  And for your information I have already booked the ticket.’

‘What? You didn’t think it necessary to even check with me. Independent lady, huh? Watching too many of those useless TV serials has gone to your head.You know Amma needs care. She has had 3 major surgeries over the past 5 years.’

‘I know. I also know that Amma has been needing care since she was 55, when we got married. You are the only son and are equally capable of taking good care of her.’

‘How dare you speak to me like that? You also know that I need to travel extensively for my work.

‘Well, my daughter needs me as well,’ she said calmly. I have arranged for a full time caretaker to take care of her and also a cook. I will train her to cook…

‘Let me talk to Aparna,’ he said reaching for the phone.

‘DON’T, she said with such a finality in her tone that he almost dropped his iphone. She wouldn’t let him browbeat Aparna, No way. Not when he wasn’t even keen on having her.

‘I am going because I want to go. For the past three years, we have been making plans and each time your come up with some office issue. I need a
B-R-E-A-K!’

‘Break? From what? He looked confused. This is our house.’

‘Forget it. You won’t understand.’

‘Is he having an affair?’

‘Are you having an affair?’

‘Then why are you unhappy?’ asked the 23 something psychologist.

They won’t understand. They never do. And Savi stopped visiting the fancy psychologists.

She looked longingly at the picture of her daughter and her granddaughter, somewhere between the lunchtime and teatime. And her face radiated. Oh those cheeks and she reached out to pinch them. “I will see you soon,” she whispered to them. It’s a promise.”

After her mother passed away, she didn’t feel welcome anymore at her Uncle’s place. Pooja was already 5 and seemed to be growing fast. ‘I want to be with her.’ It was now an aching need.

As she returned from the tailor and dry-cleaners, she saw him perched on his rocking chair watching TV which was blaring loud enough for the neighbours to hear. He had a gleam in her eyes when he saw her. ‘Due to the war-like situation in the country now, all international flights have been indefinitely cancelled. There goes your Dubai trip, huh!’

She immediately looked at the shrieking anchor, confirming the news as it flashed on the screen. She looked at him angrily and walked out of the house in a huff.

She stormed to the beach, squashing some berries and crunching the withered autumn leaves strewn on the ground. She chose a dilapidated forlorn bench overlooking the sea with the crimson sunset. The peanut vendor approached her with paper cones of salty dusted peanuts. She shook her head as she dried her tears. Two beggars approached her and when she didn’t react, they left her as a bad deal. Just then a credit card salesman approached her and she glared at him and abruptly got up. ‘Gosh, one can’t even have 5 minutes of uninterrupted time to one self.’

She came back just in time to give medicines to her Mother-in-law. She made Khichdi for dinner and they all ate in silence. Two days later Rakesh suffered a heart attack. Beads of perspiration adorned his forehead and he seemed to be struggling to breathe. An ambulance was quickly summoned and he was rushed to the hospital after asking the neighbour to keep an eye on her 80-year-old hypochondriac mother-in-law.

The smell of the ICU nauseated her. The cold white walls, grim looking nurses and the foreboding sense of doom depressed her. ‘Angioplasty,’ said the Cardio and the procedure was carried out. ‘Rest for a fortnight and strict diet with all the necessary medications,’ they said on discharge. He is over-worked, said the family doctor. This is Nature’s way of giving him a much deserved break, he said looking pleased with himself. She saw him lying on the hospital bed in the green checks front open overlap gown. A closer look revealed the tattoo ‘Kamala’ on his chest. Kamala, the perfect wife, the one who could do no wrong. The one who continued to live between them, even several years after her death.

Savi’s hands were full now taking care of her mother-in-law and Rakesh. Medicines, Diet, Exercises, Doctor’s check-up, etc took up all her time. She practiced Meditation with renewed vigour and dedication. Her video calls with Aparna and Pooja increased. ‘I will definitely take you to Dubai as soon as I get better’, said Rakesh in a feeble voice one night. ‘Or if you prefer going alone, its fine as well,’ he added.

Savi switched on the TV. The famous Ramlila maidan was lit up beautifully for the festivities…’Happy Dussehra’ flashed in myriad colours as the gigantic effigies crumbled to dust.

Geeta is a dreamer and sometimes loves her sojourn in the fictional places created by her. She loves to write and dabbles with different genres. She grew up reading Enid Blyton. She is a Chartered Accountant and is also eternally grateful for being right-brained.

This piece was written as Geeta's  final assignment for a six-week Creative Fiction writing workshop.