FEATURED WRITER : An Urn of Memories by Indu. R 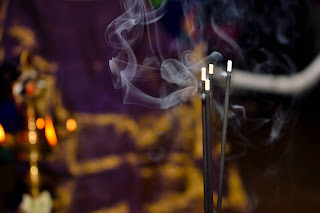 On that grim rainy August morning, Tara faced two losses. One of them was an incomparable one beyond the understanding of the ten-year-old. What bothered her was a speck of gold that she had lost in the morning.

"Amma, I think I lost my earring!", she hollered at her mother.

Tara expected her mother to give her a mouthful for having lost her earring yet again, but it was different this time. Her cry did not entice a reaction. This was a sign of what was lying ahead on that eventful day. What perturbed her more was her Appa's sad face. On any other day, he would have been game for any of the silly adventures she came up with. That day, it was evident on his face that he wouldn’t join her on her hunt for the lost earring.

Though no one took a moment to explain to her, she realised the gravity of the situation when she saw her ammomma wiping her tears with the end of her saree, leaning on her sister-in-law who stood numb.

Tara ran towards her ammomma and hugged her.

"We lost appoppan.", ammomma mumbled. Tara felt a chill pass through her spine, this was the first time that she experienced the coldness of death.

The news of her grandfather's death did not deter Tara in her search for her lost earring. She continued her search, albeit discreetly. Her eyes roved over the wet red oxide flooring as she navigated an endless stream of strangers who came in through the front door. Footwear of all sizes, colours and styles were strewn around in front of the house. She found her slippers and soldiered on with her search in the courtyard. Tara's search was turning futile, but as she observed more, it dawned on her that this experience of death that she faced was unavoidable.

She heard people talking in lowered voices in every corner of the house and realised everyone was talking about her appoppan. With every passing moment, she started sensing an irreplaceable loss in her life.

As she sat with her maternal uncle in the shamiana erected in the courtyard, surrounded by the sound of the rain thudding on the clay tiles, she saw a few familiar faces rearranging furniture in the hall. Someone pulled out an old cot from one of the rooms, another rushed to cut a plantain leaf, and another placed a lamp at the feet of the bed and lit it.

The hall that had always resonated with joyous laughter was now drowning in grief. At ten years, all Tara understood was that she should get used to not seeing appoppan in his chair every day. As she stared at the chair, her uncle asked her if she was hungry and offered her some black coffee which according to her mother was a strict no-go for children. She savored the taste of warm black coffee for the first time in her life and her tummy rumbled. She hadn’t eaten anything that day. The kitchen was lifeless and the stove was unlit. That is when she realised that it was not just her, no one else had eaten breakfast that morning either.

"Tara, don't run around and create a ruckus", Amma had already warned her. She decided it was noisy running that was a problem and that her silent search for the earring could continue.

When the rain subsided, she walked towards the gate where she saw a group of men cutting down the mango tree that stood at the eastern end of the orchard. She overheard them talking about her appoppan.

"It was hard seeing him suffering; I still remember him walking back from school”, one of them said. As they saw Tara, another one said, "He was my teacher". Tara smiled at him.

Then she saw two men clearing the space between the two giant trees that her ammomma had told her were her great grandparents. As she imagined another grandfather tree growing there, she heard the two men discussing the umpteen tasks they had to finish in 24 hours. She passed the newspaper uncle walking towards his moped with an envelope.

“That must be for the obituary page” thought Tara. She knew about obituary pages because her grandmother cropped images from the obituary pages in the newspaper to stick in her album. As hours passed by, she saw many familiar and unfamiliar faces flocking the verandah and her home filled with the fragrance of incense sticks. She forgot the lost earring as she intently listened to every hushed conversation she heard.

"I was expecting this since I saw him yesterday afternoon. His breathing was labored. I remember my mother having similar difficulties a few hours before she died", said a neighbor ending his words with a sigh. The family doctor came out of appoppan’s room and sat in the mezzanine with Tara's mom. The usual stethoscope that he had around his neck was missing that day. A neighbour who would visit every Friday to speak to her husband in Dubai on their landline phone stood near the phone. Usually she just stood there expecting a call but that day she was meticulously dialing phone numbers one by one from her ammomma's telephone directory.

As she roamed around the house with wandering thoughts, she saw friends and family coming in while women from the neighbourhood started chanting prayers sitting near the cot in the hall. An elderly man stood near Tara's Appa and his sister discussing the rituals that needed to be done and the arrangements required.

Twelve hours passed. Tara was back at her home with her maternal uncle. This time she tasted Bombay bread toast for the first time. In between taking big bites from the toast, she asked her uncle, "What do you remember about appoppan?”

“He was a good man. There’s a lot I could tell you but you need to wake up early tomorrow. We have time for stories later. Go and sleep now.”

Tara finished her slice of toast and moved to her room. When she tried to sleep, all the stories she heard since morning at her grandparent's house came rushing in. Words that she had heard transformed into vivid images of a young appoppan teaching inside a classroom much like hers. “Did appoppan teach in my school when he was young? How would it have been to attend his class?” Tara wondered as she gently slipped into deep sleep.

The next day during the funeral, she repeatedly heard the man who led the rituals, asking the men of the family dressed in white to remember the one deceased. Tara, who wanted to take part in the rituals, took a step back when she heard this. Images of a frail appoppan leaning on his easy chair, calling out whether lunch was ready when he had had his lunch just ten minutes back came rushing to her mind. She tried to think of something else and looked at her aunt. She didn’t understand why her aunt, the eldest in the family, was not allowed to take part in the ritual. As she circumambulated around her grandfather who was wrapped in white cloth, she tried in vain to conjure an image of the best memory she had of her appoppan.

When smoke from the burning pyre started appearing in the sky, she saw people starting to leave. She too went home and had a shower.

The house became a familiar space once again, but as she crossed appoppan’s room, she felt a void in her. The next few days, there were many visitors, each with their share of stories, a few wanted to know if he remembered anyone towards the end and some asked uncomfortable questions about living with someone with memory loss.

After the rituals on the seventh day, ashes were collected from his pyre and kept safely in an urn. "After a year there will be some more rituals and after that we will immerse the ashes in the sea", Tara's appa told her. "That's like etching his memory in nature.”

As days passed, Tara felt everything around her coming back to normal once again- black coffee was again off the menu for her, no more strangers in the house, all the furniture was back in their places, except her ammomma who now wore a black bindi instead of her usual red one.

A year passed by. Tara continued collecting memories, she raided appoppan's table and cupboards. ammomma gave her journals to Tara. Tara gathered memories of a grandfather unknown to her just like how the elders had collected ashes from the funeral pyre in the urn. Though she had only known her appoppan as a weak old man who was slowly losing his memory, vivid images of his younger self slowly started to emerge in her mind-  old blotchy monochrome photographs of appoppan slowly into colorful moving images. The stories she heard and the memories she had of him flowed into one another and solidified into an amalgam, and there was no telling one from the other. The urn was gone and her grandfather’s ashes were now one with the sea but his memories were safe with her.
About the Writer

Indu is a freelance writer who hails from Kerala and lives in the UAE. She enjoys fables, folklore and historical fiction. This piece was written as Indu's final assignment for a six-week Creative Fiction Writing Workshop.