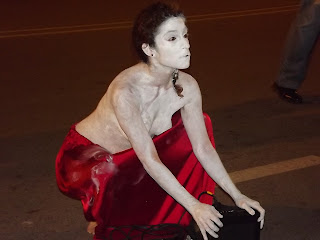 I sat in a purple t-shirt on the steps of the dance studio, the sacred space at the butoh school located in the foothills of the Himalayas. Facing the white and red mountains, I sat there for hours with my eyes closed, my hands relaxed, placed on my knees, with palms facing the sky and listened to the faraway birds’ chirping, trucks roaring through the mountain highways, the wind whistling through the trees, the water fizzling through the crevices in the nearby rocks, and my breath.

I felt peaceful, and strong. A tingling sensation developing in the lower part of my back, and just then, a long lost small love affair happened somewhere in my head.

I thought about running away from my home. Just like every other day.

With a sense of playfulness and joy in my doing, as always, I moved my spine.  Clockwise and then anti clockwise. A world of sensations flowing through me. A mystic life, a mystic gasp, and I was gone.

Wandering in a state of bewilderment and ecstasy I found myself developing horns of a bull, trunk of a white water elephant and arms of an octopus, till we all became one big cloud floating across the blue sky.

Some of us were asked to be blindfolded, and the rest were to feel the qualia around. I touched, smelled, awakened my skin, weight, sense of direction on my feet, knees, hands exploring - the responses and rhythm. A discovery.  We were made to carry heavy books on our heads and walk up and down the stairs to develop balance. Our role models were the beautiful women of the nearby village who carried water filled pots over their heads without holding them and could walk for miles, at ease.

Deep and heavy work, that allowed us to be, that forced us to be.

It was then, that we were guided into the ‘ash walk’. Where the body was a pile of ashes, walking on a thin rope, between heaven and hell.  Each of the joints hung loose by a spider’s thread, suspended through the sky, and the body turned hollow from within. The insides were emptied out. The jaw hung loose. At the back of the mouth lay a deep darkness within the body.  Memories of the dead, meeting with an old friend, years of remembrance, the behind world crossed our path, as we took the next step.  The eyes looked at nothing. They did not blink. Sometimes swayed transparently, sometimes remained still.

Each and every cell became a needle. The body could collapse anytime.

I had water flowing out of my eyes. I don’t know if they were tears. My back turned a little round due to the hollowness within. My height shortened due to extreme weakness in my wobbly knees. There was no sorrow, there was no pain, and there was no happiness.

There was no burden of the body.

A burden of something, though, moved the body forward.  The crippled feet walked carefully to let no harm to a tiny bug or even a blade of grass. I was walking on clouds.

A gentle breeze swayed the ash body, as I caught hold of a faraway memory.

My nose twitched with a fragrance of something very familiar. Sandalwood.

I met an old lover. A strange disassociation. A pull and a push. My right arm twisted inward and moved up towards the sky. A sudden tightness gripped it, while the rest of the body hung loose.  My fingers reaching out,  shivered groping for another memory.

I heard the shivering. The shivering intensified and jolted me out. Suddenly, wrapping my body into my right arm. I got pulled into what my eyes could see.  A purple flower growing with the weed and the grass. Trembling with the wind. I found my breath.

A survival instinct.  Or a way to transform the memory.

I felt weak, and the joints started to give in. The spider's threads were being cut loose. My achilles collapsed first, followed by my calves, knees and then the hips. The spine started to dissipate as it touched the ground. Each vertebrae vaporised into thin air one by one, and eventually, so did my face.

1. Butoh : A japanese dance theatre that was born after world war 2, as a result of a rebellion against the western approach to structured form of dance, movement and expression, mostly ballet.

2.  Ash walk :  A walking technique in Butoh written in Japanese by Tatsumi Hijikata. Also, it has been translated into English.

3.  Behind World :   Ancestors and the past memories.

About the Poet
Akshi is a dancer and a martial arts student. She is also the founder and CEO of an ayurvedic products company called Butterfly Ayurveda.

She enjoys writing from time to time to express herself,  whilst drawing inspiration from her own life experiences.
Labels: Ashes Indian Poets Indian Writers Inkspire