POETRY : The Weight of The Lost By Maansi Saksena

No it doesn’t always need to be ugly. Or sad. Or melodramatic.

The kind that falls somewhere in between glory and gory, dark and bright, ecstatic and petrified. In plain, simple words- minus all the gloss! Just real.

Talk about husband and wife relationships.

We are like the clothes we pack for our journey.

Every piece of cloth denotes our mood. And we carry these varied moods stacked carefully inside this suitcase of life.

Sometimes we go in pairs, sometimes solo, often mix and match. But most of the time we are ignorant. As we sit next to each other, in neat piles, we don’t realize what we can do together unless we do.

The ones who experiment, are more likely the kind of couples who regard symbiosis as the essence of their relationship. They are flexible and hence more open to making mistakes and creating memories all at once. Mutual respect and love between them surmounts snags no matter how small and wars no matter how big. Needless to say, they’re always together.

The ones who don’t are mostly the ones who might stick together but always exude this sense of singularity oozing out of every move of theirs. Owing to their rigidity they listen less and explain more. Respect, more than love is often amiss in their relationship.

But the ones who do not know and do not care, are the ones who have no idea whether they are just living it or not living it at all. Ignorance, reigns supreme in their relationship.

More than choice, obliviousness holds them together. And even if realization knocks in, the effort to recognize what harm an unaccomplished relationship can do to them, never sees the light of the day.

Affection is often mistaken for love here. And respect is a non-essential.

They are also the ones who are so busy stuffing it all the way inside the suitcase that they forget, it’s about making room for those few quintessentials! The ones that make you feel whole.

Whether they are scrunched or knife-edge creased to perfection doesn’t really matter!

Making space for each other does! Who cares, though?

But sometimes, we only accept the vacuum—the one we created, after having lost what never felt like it could leave, exit or vanish into thin air. And one fine day, it just stops being there. Forever.

I am a perfect living example of such ignorance.

I always thought I gave her a happy life.

As husband and wife who had kids, a job, big house, two cars, bank balance. I mean what else you need, to complain that it ain't good life. Eh!

Nothing. Or so I thought.

I never asked her. And she never told me anything either. Except an unsatisfactory enduring look she used to give, that I almost thought was a part of her facial configuration-yet not weighty enough for me to inquire about.

Suggestive of one being happy.

While she never had to worry about managing bank accounts, debit and credit cards, driving car etc. I took care of all of it, for her.

And the affection we showed towards each other with family and friends around, it used to be so perfect at times.

And ‘at times’, seemed just fine. ‘All the time’ isn’t a little too much to expect! At least that is what I thought.

Our conversations and arguments, agreements and disagreements were married to each other in a way that we could never understand the difference.

And so we never cared to figure what was what.

And despite some ‘pieces’ missing, we made ‘peace’ with it.

Or at least I did.

For every new plant that she wanted to buy I had my reasons to argue, who will take care of it? Do we not have enough already?

For every new purchase she initiated, I used the same old logic, do we really need to? Why waste money?

For every new fixture she suggested, I had the same longstanding answer embedded in a question. Why?

After a time she also gave in and I thought everything was in agreement.

And for every fight that we had- good, bad, ugly, she never left. So I always knew she would always be there.

And it gave me all the comfort and reason to believe we are even.

Life moved on, kids grew up, moved out. And it was just the two of us.

It was never a ‘you and I are on the same page’ equation between us. It was more like ‘this is how you see and this is how I see’ kind of an imbalance that we shared. Because we were far beyond than opposites could ever be. And yes, opposites do attract- all kinds of differences in some cases, if I may say so.  And we were okay as long as everything else was running fine. The most critical of all that is, ‘everything else’!

Like food being cooked, clothes being washed, house in order and happy selfies uploaded on social media, with whatever little knowledge I had about it.

But in this cacophony of acceptance and denial we found our own love hate composition that became symphony to us. And with time, we were capable of addressing the fleeting objections in the passing without having to make it an issue bigger than it was.

At least we honed that skill.

Only until I realized that all this while, our lives were nothing but a quotient of what I thought.

I am not a bad person. Just that I was a little too much about my own self. And the mighty realization came, a little late with unfolding of an unanticipated event. Just like the most awaited summers after the extended, overstayed winters but accompanied by heavy rains.

Yes, it poured like never before that night. And the following day was the sunniest ever.

I had some important business. Along with my personal belongings I had some other heavy stuff that I needed to carry with me. I left early in the morning with my driver.

While sitting in my car, the only one time I could breathe was when I fell asleep for a couple of minutes as we scurried our way out of the city traffic and hit the highway.

The heat was at its peak, and the sun shone down on me scorching bright, making its way through the car’s window panes.

And I wondered why I do not remember having any memories of us in this car. “I am only destined to ride this old, dirty, good for nothing car, which does not even have an AC in it. The new one is only meant to be parked right”, retorted my wife on one hot summer day.

The Delhi heat can get the better of anyone. Isn’t it.

That’s what I thought.

Well and also, a small car, no matter how old, is easy to travel in. From grocery shopping to medical store, to picking up and dropping off laundry, I can take it anywhere and everywhere.

The tightest of the corners and pin like narrow roads, this one gets past smooth like butter. And the best part is I can park it wherever, even if it is not a valid parking spot.

Who would dare touch a pile of dump!

And a bump here and there doesn’t bother anyone. Not me at least.

Who wants to drive these gigantic, bulldozer like cars!! I just bought one, to keep one for the sake of it. So hard to navigate through the hair pulling traffic jams. And you can’t imagine it’s such a teeth grinding task to park them. Even if you give away a kidney, getting the right spot to park these giants is impossible.

“Past thirty odd years I have only ridden in this old car. Not for show off, but I do feel like riding in our new car. And why not? What’s the point of earning so much if we can’t even enjoy it, she said, wiping the sweat off her face!”

“And it’s pointless to ask you to hire a driver”

“A driver comes with a cost, madam. And since you don’t know how to drive, you have no idea what it’s like to be on the road. If you want, I will give you a ride in this very car, or else take the public transport.” I remember yelling at her.

“Sir, said the driver. We will be there in another hour or so. The traffic is really bad. Thank goodness you picked this car. Or else we would have not been able to make it in this heat.”

As I sit holding her ashes, in this air-conditioned chauffeur driven car, I feel the heat of remorse lashing at me. Slicing me into bits and pieces. Reminding me of the time, I could have carved moments out of. Instead I was busy fussing over irrelevant issues, partaking in how to disagree with her and win the argument.

And here I am sitting tight with all those arguments piled up as is, however I have no one to argue with. I can now just remember and imagine every conversation that could have been.

That extra plant she insisted on getting, the cabinet door that is still hanging loose and the dirty walls that never appeared as dirty before when she asked me to get them white washed.

I rubbished it all as nonsense, waste of time, money and effort, that day. And today all of it, all at once makes so much sense to me.

Who knew, finding answers to all my - ‘why did I’ and ‘why did I not’ would take so much time, that perhaps all I’d be left with is time. Unaccompanied time.

This all could have been so different had I not carried on with my one sided reactions alone. A two way conversation, could have transpired into multiple moments to live by.

Every corner of the house as soon as I stepped in reeked of everything that could have been. Why did I not make that extra effort to just make that conversation happen?

And today while I wish to listen to the other side, there is no other side.

My suitcase was clearly filled with a lot of stuff, which I never needed.

All she asked for was a little room in this suitcase of ours. A tiny bit of hers in this one filled with all mine!

And who knew, it would be her ashes (a pinch of it, that I seized) sharing space with me in this suitcase! Just to add so much weight that she couldn’t ever while she was alive. And I am going to carry it for the rest of my life. Every single day.

Withstanding this unproductive longing to feel light, the one I was unaware of, that solely emanated from the comfort of her presence, will never be accomplished. In the meantime, I will try to make friends with her ashes.

Until we meet again, if ever. 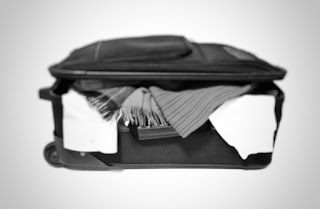 With a bachelor’s degree in literature and an MBA in marketing, Maansi worked in advertising prior to moving to Chicago with her Husband. Mother to a 4 year old, she just had her second baby a month ago. Alongside a full time job and a couple of freelance writing projects Maansi wishes to fulfill her childhood dream of taking up writing as a career. A poet at heart and an exuberant personality otherwise, she has maintained a very private profile as a writer. With an aim to now share her craft with public she is working on her blog.