“Look up the guy proper..heard he is on and off water..‘thanni’”, she heard her father mutter under his breath. In the world of little snakes and longer snakes he was merely a water snake. “‘Neerkkoli kadichaalum athazham mudangum', remember the Malayalam proverb my girl” her father said and she was suddenly overcome with an uncalled for affection for the unfortunate man. ‘Alcohol consumption is injurious to health’ she read in the theater that day and remembered him.

As far as first meetings went it was quite the ordinary. He had been at the bus stop only a literal two times before sending word to her family. The very pressing lack of a meet cute had in fact annoyed her. It hadn’t sat well with her that he had pinpointed her out of the crowd of friends in the swarming bus stop for the desirable purchase. The addiction was the first chink in the armor, a ray of possible vulnerability that she was supposed to manipulate to her end.

“At least he would be the perfect arm candy”, she heard her friends bicker as they blasted away the bachelorette. In her tiny conservative bubble it meant unlimited payasams and the right to sleep late. “Let him do his thing and let you be you..chal..we know how to play this game”, an anonymous girl friend whispered before the nirapara.

“A woman is like a stream of water unpolluted, that meanders the hell out of hurdles all the while calm and steady..the stable rock to my chaotic universe..”, who knew the drunk philosopher could still reek of misogyny. At least he is steadfast in his convictions, she reminded herself to smile. The first blow had caught her by surprise. It always did. She never saw it coming.

“An element of surprise now and again is key to a healthy marriage” her mother had whispered behind the curtain. She need not have bothered; he kept the marriage thriving on all fours. In the few years they were married, he had graduated, trading domestic love and bliss for imported foreign liquor. When he caught her unawares, cornered against the wall she smelt the Bourbon in his breath and missed the shabby toddy.

The belt buckle had lost its bite..perks of being a kettiyavan worn out. “Not another drop..lest you drive him to death..”, the doctor’s warning had been dire. ‘‘‘Pulayadichi Savitri’ don’t wanna let me pass in peace” she heard him raving, lips curled up. “Chaar botal vodka kaam mera roz ka” she couldn’t help humming rationing out the heavenly brew. Neerkolikku thonda nanakkaan thulli vellam vende? His look of desperation almost had her then..but comeback was a martini long overdue, served on the rocks with a pinch of salt to rub it in.

Savitri had braved death to save her beloved. He still thought she cared. Power had an exhilarating feeling to it..with great power came the freedom to live and let live. There was no better addiction and she wasn’t gonna give that up..that was until she did.

The girl had a name and a face to go with it. She had pinpointed him out of the crowd of onlookers; “the perfect eye­candy..,” she had blasted away the bachelorette. “He wasn’t too good a lover anyhow..at most an occasional fluffer..”, her friend giggled, slurred vodka breath trembling across the line. It was water under the bridge too late..she had moved on but then she hadn’t. “You are too good a wife to bail on him now..after all it was his addiction speaking..think of the paavam man..he fairly worships you..”, the old familiar argument had long worn out.

Desperate for a drop..trading man for drink..he almost had her affection..only almost. Savitri, she realised, was the wrong kind of chaste. The bitch thought she could have her way with any man

she chose. Sheelavathi was the right model to emulate, she laughed in delight. He craved his drink, then drunk he shall be.

“I knew you would see it my way,” he grinned like a kid with the perfect candy teeth, “that doctor was a tool who knows no better.” He died of excess. “Had a drink too many, blame you not. He was a grown man digging his own grave,” the inquest was most sympathetic. ‘A woman has gotta do what a woman has gotta do’ she reflected and grieved, over the dead poor man and now lost power.

“No use crying over spilt milk, she is too young to wear white. This time do look up the guy proper,” she heard her father mutter under his breath and smiled. 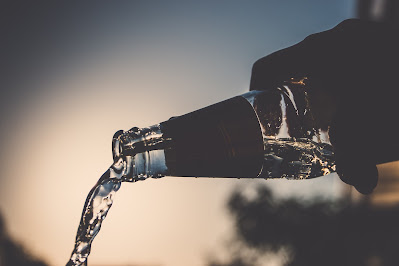 About the Writer:
From as early as she can remember, Neelima has had her love for story telling. A postgraduate in English Literature, she dreams of making it big. Books are her happy place while she sets out to conquer the world.
Labels: Creative Fiction Indian Short Stories Indian Writers WATER