CREATIVE FICTION : Sarayu by Samanvitha B.

“What is past is prologue” read the epigraph in the book I  was supposed to read for the book club this month. I suddenly felt tired and looked out the window. It had started to snow, soon there will be a carpet of sparkly dust. I recalled the childlike glee the first time I  experienced snow, I  had even indulged in a snow fight and made a snow woman on Anvi’s insistence. Just then I heard footsteps and a  familiar voice calling   “ammamma” (grandmother) as Anvi  flung into my  arms for a hug.

“Ma can you make that elixir of adrak(ginger) chai for me, I had 2 cups of coffee since morning but nothing lifts me up like your chai” my  daughter Anjali said as  she came in to the room following Anvi. The weather demands onions pakodis continued Anvi  in a  sing song voice.

“Is Sagar going to join us?” I asked.
“ Yes he is just parking the car and mentally preparing for the snow storm , we’re expecting 7-8 inches between today and tomorrow.”

Yes I read about that I said walking into the kitchen. Anvi pulled up a chair and stood on it while  I put two vessels  on the stove, one with water for tea and the other with oil for the pakodi.   Anvi watched intently as I pounded some ginger and added to the water along with some tea leaves. As the water started boiling and turned an amber color, Anvi  exclaimed , I love that color. Can I have a Chai colored dress for my next birthday?”
I couldn’t help laughing at her innocent request but she looked serious  so I said Okay.

My son-in-law Sagar walked into the kitchen saying  “Just what I need attaya (mother-in-law) you’re the best”. He then proceeded to ask what we wanted for dinner. “I’m donning my Masterchef hat”
As long as it isn’t burnt whispered Anjali. Sagar made a dramatic expression of looking hurt . Amma! Anvi interrupted breathlessly ( she was always breathless this whirlwind of a girl!)Can we do the scrapbook of all our pictures  now as a part of our Friday Family activity.

So it was decided! Huddled over chai and pakodi we went through the box of memorabilia that my daughter brought from her room.Pictures, greeting cards, slam books, I had given some of my own to her  when I  came here as a keepsake. Anvi suddenly exclaimed “arre! Amma look ammamma looks like that heroine from that old movie we watched the other day and tatha(grandfather) looks handsome too  in the dhoti and look at all those flowers in the background”.
Sagar peeked at the picture in her hands and said  attaya(mother-in-law) you should share some tips with Anjali , she has a different kind of talent and has managed to kill succulents  and cactus too! At this Anjali whacked him playfully.

I smiled and took the photograph , I was wearing a dark green color saree with the red border, my first anniversary present. Technically the garden was my first present, my mother-in-law had suggested that we plant something as a remembrance of the new beginnings after our marriage. Unlike the stereotyped mothers in law she was a kind lady, and told me stories about the village. One of her favorite ones was about the river and the belief that if you offered something of value to the goddess she would make your wish come true. I did not believe this but I did not have the heart to contradict her and some of the stories were fascinating so I listened. As soon as my husband returned from work my mother-in-law would make herself scarce on some pretext of cooking or calling on the neighbor and give us our time. We would tend to the garden together and sometimes take a walk down to the river. This was our escape from the daily humdrum -  holding hands and sitting underneath the banyan tree and watching the sunset.
“Sarayu, your laugh is like the sound of this flowing water” he would say or “our love will make our life  flow like this river  through all pain and difficulty and each bend providing a new view”. What a charmer my husband was always leaving me giddy with happiness.

After the first year my husband started coming home late, apparently his friends started teasing him about the amount of time he was spending with his wife. He had more worldly things to do and I had to fulfill my wifely duties, give his mom some respite. I didn’t necessarily disagree but why box up the responsibilities. We  could do it together I thought but I was blinded by love and bound by what I thought was duty.The garden that once bloomed when watered with love now withered slowly like our relationship after every fight and the water I touched were the tears that came afterwards. The serene river   that once calmed me  was agitating as it turned brown by the day with debris and all kinds of acidic waste from the nearby factory. I still went to the riverbanks though , the banyan tree gave me solace with its sturdy roots and expansive branches. I would sit there and try to recall days when I wore jewelry  not just to cover up my bruises. Trying to hold on to the memory of kisses that weren’t forced and a time  when I wasn’t afraid for my  life.My  mother in-law had suggested that I offer a prayer and hope for a miracle.

I complied, I picked an auspicious day, walked to the part of the river where there was a small temple to find the priest .
“No prayers ..storm tonight and flooding… the priest said closing the temple gate and hurried  past me  even as the rest of his sentence got drowned by thunder. Dejected and desperate I flung  my gold bangle ( the only thing I had left of monetary value, my mother’s wedding gift), better for it to be lost in the  river than end up with my now alcoholic and gambling husband.

I plunging into the river myself, might be a painful death if it was  not immediate as  the acidic  factory waste would slowly  damage my organs for certain.  NO I decided I  wouldn’t let this be a story about him.I had a baby to think about too. Just like  the water surface on lakes  turns to ice and floats during the winter, allowing the ecosystem to survive under the layer of ice I had to shield the baby and survive. I had to stay afloat.Determined I had returned home.

We should frame this picture said Sagar holding up the picture of a newborn Anvi cradled in my  arms while Anjali hugged me. This brought me back from my thoughts and said we should recreate it, I heard it’s the new social media trend.
”Amma, look at you all tech savy” Anjali said. We started picking up a  few others potential ones to recreate. There  were oohs and aahs and giggles as we went through pictures of wedding ceremony followed by  anniversaries, Anjali in pigtails , Anvi’s first birthday. Inconspicuously I retrieved another picture of me with a 10 year old Anjali, under the banyan tree . I was wearing a simple blue cotton Saree. This was 4 years after my husband’s death on that fateful night of the storm. I had just got the job in the local school as a teacher and the saree was my first gift to myself on my mother-in-law’s  insistence. I did not have a single picture of her but I could conjure  her kind face and encouraging smile every-time I closed my eyes.

“Ammamma! Will you tell me another story tonight!”!

“ Yes yes of course! Let me tell you the story of a woman who made a wish by trading a gold bangle to the river goddess”

“Did the goddess grant it?” Anvi asked excitedly.

“No, but the goddess gave her the strength to fulfill it herself”  I said tickling her.

Past is only a prologue I said to myself silently. 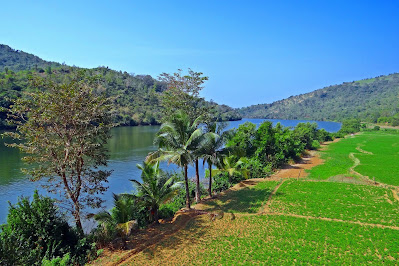 Samanvitha is an Engineer. She can sometimes be found baking or lost in nature but almost always with a book. Stories have always been her escape - a source of joy and solace and she hopes to weave words that would have a similar effect on others.