CREATIVE NONFICTION : Water - my best friend and my enemy by Suma Ravindran

Water- a colourless,odourless tasteless liquid that takes the shape of its container, the colour and taste of what is in it. It is made of hydrogen and oxygen in the ratio 2:1. This is what I learnt in school and College.

To me, however, water is my best friend, my worst enemy, my counselor, my pacifier. My earliest memories of confiding, of daydreaming, of imagination and creativity are at the side of the pond in my mother's house. The cool breeze flowing in from the paddy fields, and causing ripples in the water of the pond, calmed my nerves and gave me company during my lonely holidays there. Here I used to create stories and situations in my mind, with me as the central character and a lot of additional people around me. I held conversations with them, argued and debated with them and enacted different roles with my audience clapping in appreciation. When I returned home after the lonely sojourns, I used to recreate these in the bathroom with the taps open. When I feel sad or disturbed or angry and distressed I still retreat to the closed room and the sound of water. I shout out my anger, distress, sorrow, regret and cry my heart out, something I find difficult to do in the open. I always came out with the issue resolved to my satisfaction...my own personal psychological catharsis, cost effective and efficient.

The sound of water running through the streams at the plantation in Nilambur, constant, soothing reassuring, or lazy slow dribbles in the summer, the hurried loud rushing sounds in the rainy season, the sound of the distant river, reassuringly steady unless it was raining in the mountains, the angry  thundering rush in constant rains, often my moods are a reflection of these sounds I hear. Water flowing smoothly over small waterfalls is by far my best friend.

The water cascading over the rocks at Athirapilly, Chapra, and so on can hold me captivated with no stress, worry or thought for hours on end. The beaches and backwaters too have provided me with hours of pleasure. Observing the waves rush or crawl to break at the beach, fishermen tirelessly, fighting their way into or out of safe harbor, the ships gliding by in the distance, the occasional motor boats disrupting the peace and quiet, I lose myself in the sights and sounds. The angry waters in the rains or in storms fascinate me.

I love the rains, the drizzle, the heavy downpour, the splashing, chilling droplets on my face. I love it the most when it is accompanied by lightning and thunder. I love to observe the rain clouds gather in the sky.

The only place that I feel uncomfortable near water is around dams, sites where human need to control, direct and command are seen. I feel restricted and contained whenever I see waters in dams. They threaten me. I can feel their anger and anguish and I know that they are a potential threat.

My estimation and fear of these artificially controlled waters was justified in August 2018, when more than half of my state was inundated with waters released from dams due to overflowing reservoirs in an unusually heavy month of rains. The relentless rain gave sufficient warning that it wouldn't go away and the stupid human thought he knew best when to release the waters. Detailed plans of how the water would flow were prepared, precautions taken, warnings issued. The arrogant human forgot that water would always choose its own way. Angry, bursting free from years of confinement the waters flew wildly through the rivers, breaching barriers, breaking banks, over town, village, city, crazily seeking its way into a sea which was experiencing very high tides for a week as it did every year. Everything that stood in its way was swept along, swiped aside or inundated.

We sat at home, glued to the TV, listening to the relentless rain outside, secure and warm, stocking up on supplies for the long wait. Everyone was cut off from everyone else. Thankfully the mobile towers were functioning and the entire population of Malayalees the world over tuned in to seek help for the marooned.

This was my second experience with human error resulting in floods and untold misery. In 2015, the Chennai floods had caused us to abandon our house for a week, cut adrift with just the clothes we could carry and the cash in hand. Then there was no means to access supplies or to pay for them as even banks and ATMs were inundated.

This time, sitting at home, my friends and I mobilised financial aid and ventured out to send supplies to the most affected areas. The waters soon reached closer home and my Alma mater St Teresa's College was asked to open a relief camp. We rushed in to volunteer. For the first time I saw the villainous, treacherous nature of water in every face that I issued supplies to. This also gave me a chance to count my blessings and not think about my house in Chalakudy that stayed inundated for over a week. When we finally closed camp, with everyone returning to face the reality of starting afresh, I went to face my fears.

The water had receded. But it had had a gala time with my house. It had left behind a stink which remains on the walls to this day. I feel violated, as if the waters had invaded all my private spaces.

I still do not fear the waters. I look at the rivers and streams and lakes and backwaters and the sea and the beach, the waterfalls and the rains with as much fascination. They continue to be my best friends and confidants. Whenever I recall those terrible experiences of 2015 and 2018, I silently apologize to the waters for the human flaws that demonized them. 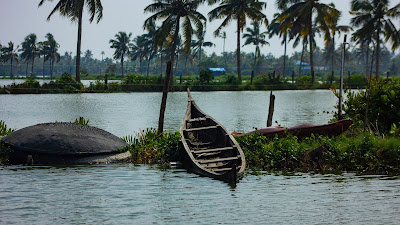 Suma is,at 63, still trying to master all the trades that catch her fancy. She prides herself on her parenting and teaching skills and loves to counsel and pen words of her brand of wisdom, all of which stem from personal experience and her perception