CREATIVE FICTION : It wasn't my fault by Rupam Sabharwal

The crescent of the moon looked beautiful, hidden behind the clouds. It was a breezy night, the roads were quiet. Mumbai looked different at 3 am- calm. But, there was an uneasiness behind the quiet; Rashmi was awake. Her brown eyes were tired but they wouldn’t shut to let her sleep. She didn’t want ‘the dream’ to haunt her again.
Gasping for breath she sat on the bed and wiped the sweat from her forehead.  Her puffy eyes checked the other side of the bed; it was vacant. It was her decision to stay alone, but sometimes she wished someone could hold her.
She wore her chappals and went to the bathroom.

“Aaaaaaaaaaaa!!” She screamed as she switched on the light. 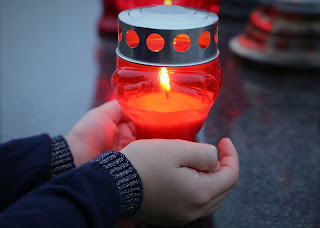 About the Writer:
Rupam Sabharwal is a Regional Manager, Artist, Traveler and Story teller.
She aims to visit every country and experience their culture. She is a creative soul who loves to paint and create 'Do It Yourself' things for her home and loved ones. Dancing gives her a high and she does that like no one's watching.
She loves reading and a cup of coffee with a book is her idea of a perfect break. Writing liberates her and is her passion.