POETRY : Of Roots and Pursuits by Khyati Bheda

Born in the arid lands - the Great Rann of Kutch,
A little boy’s journey began such,
A life of simple routines, of pre-dawn mornings,
The first meal of hand-patted bajra (millet) rotlas fresh off the hearth,
Accompanied with dollops of ghee and chunks of jaggery,
With the sunshine starting to trickle in and reflecting off the Lippan (mud and mirror work) wall tapestry.
Days filled with learning, both formal and osmotic,
Big on Ganit (math) and tenets of Jainism,
Helping tend to the cattle and the (meagre) crop,
A life of rigour, and minimalism.
A habitat harsh,
Albeit an everyday (and in hindsight, everlasting) sense of kinship and community,
Of late afternoons exchanging stories under the village tree,
An atmosphere of shared worries, or infectious gaiety.
Of pre-sunset dinners, on most days the staples of khichdi and kadhi,
Again, incomplete without dollops of ghee and chunks of jaggery!

But the land’s saline waters soon uprooted this simple, slow-paced childhood,
Setting him off to uncharted lands,
Lands, that held the promise of enterprise,
The promise of newer, more stable forms of livelihood.
And the young boy’s journey unravelled such,
Like a brook traversing its path,
Sometimes gushing, sometimes restraining,
Changing form, changing course,
At times directionless, at times a force,
Flowing on towards its destination,
The intimidating yet enticing ocean!
And more than 1600 kms from where he’d started,
The little boy, now young man, from the Great Rann of Kutch,
Made his home in another arid land - this time more city than countryside,
Here he strived toward building a steady life,
At times faltering, at times a force,
Adapting, persisting,
Much like the brook heading to the ocean,
Taking all of life’s travails in his stride!

Years rolled by…the doubts faded, as did the prominent imprints of his homeland,
For just like water, the universal solvent that takes along the minerals and substances of wherever it passes through,
The young man and his family also assimilated the novel ways and experiences they encountered,
In this adopted homeland, miles afar from their native salty marshland,

The meals got more varied, as did the clothes,
It never felt imposed, for he and his family had blended in,
And heartily so, with gratitude and warmth for the land that did deliver on its promise,
The young man, née little boy from the Rann of Kutch,
Achieved all that he came seeking for, and more.

His story is not solitary,
In fact it’s so common, it’s almost ordinary!
Like the many others who set off towards new shores,
Whether by choice or by circumstance,
Feeding off mainly a will to explore and to persevere,
Adapting, even reinventing themselves,
While holding onto a semblance of their early lives so dear,
To discover a new home in their destination,
Much like the little brook heading to the ocean! 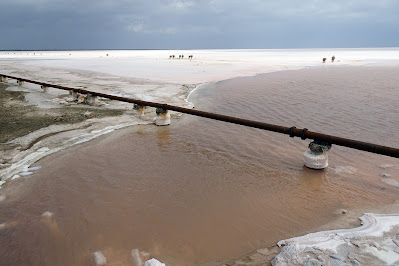 Khyati Bheda works with a tech start-up, is mom to a kindergartener, and has a penchant for all things hand-made. An avid reader but a sporadic writer, she loves jotting down memories old and new, whenever she gets a breather from her business writing and to-do lists!
Labels: Creative Non-Fiction Indian Poets Inkspire WATER