Late! He was going to be so late...
An urgency which he hadn't known before. A restlessness too. It was akin to the feeling of unbridled energy coupled with anxiety that drove him to cold sweats.  He knew he shouldn't have had that third cup of coffee. Black at that. He was nervous before he had brewed the pot of coffee. Thinking coffee would calm him down. ‘But first coffee’ had become his adopted mantra. He had an odd fantasy associated with people who would wake up and mechanically go for their first cup of coffee, that too black, no less. That is what really tough people do. Yup, truly irrational but when he was nervous he would give in to flighty thoughts in hopes of distracting himself from the task at hand. And now after three cups he was not only nervous but also restless and anxious. Positively frantic. And he needed to go poop, again!


Such a wannabe coffee lover. Pretend coffee-ista, That’s not a thing, is it?


The last week had been miserable. He had taken days off from work. And decided that he had to try again. This was the decision which had made sleep even more elusive than before. He wanted to hear her say something. He wanted to tell her things. He wanted to know where they were for those seconds or was it minutes or more before he crumpled into a heap of untoned body mass and junk food rolled into one? He had other reasons for not going into work too.

He was late and yet he kept sitting at the dining table set against a wall with paint that had chipped off steadily to gather itself into a pile where the table met the wall. He had purchased it at a so called ‘awesome’ price from a colleague. He had scored a deal, a gently used four-chair dining table set. And yet as the chair made of particle wood creaked under him, he sighed and decided he had overpaid. He often felt this way about his transactions; right until money exchanges hands, he is the one who is winning but later when he alone but for the company of his thoughts - it hits him and with every ounce of blood coursing in his veins, he is sure that he overpaid. No doubt about it. He ran his hands through his wavy, untidy hair as a thought went through his mind yet again.
Such a wannabe negotiator. Idiot? Maybe that’s a better word to describe who he really is.

Slowly, he stood up from the chair and turned away from the dull off white wall and yawned noisily. He stood looking at the sliding door that overlooked a dark forested area with trees, twisted and turned like people frozen in a painful pose, like while running these people had been hit by lightning and as they writhed in pain, life ran out of them and they remained rooted. Caught in an eternal morgue. Some of the trees had been struck down during storms and they were left with trunks with splintered, sharp ends. Spring had yet to announce itself and the leafless caricatures cast a terrifying foreground to dawn fighting a losing battle, trying to break through the gray clouds and the twilight sky.  But regardless, it would soon be daybreak and he had decisions to make. Snow started falling as he stood there transfixed by the sight. He felt so exhausted. He had been up for a few hours. Sleep had been elusive and he had wrestled with his pillow the entire night, unable to make the decision. He had struggled with sleep for several months now. All those months he had been walking away from his bed before day break. Not because he was an early riser. Just a wannabe morning person.

He had first seen her a few months ago before he lost the ability to sleep. He had woken up at eight minutes past 4 am, parched, and realized vaguely that it was raining. He fumbled his way through his dark apartment to the kitchen and walked into the dining table. The pain which shot through his toe had him jumping about on one leg, cursing all gods small and big, inventors of furniture and life itself. As he was bouncing about he tripped over his shoes carelessly left on the floor of the hall and he crashed to the floor, wildly flailing his hands to break his fall but instead brought the coat rack down on himself. When it was over he was left tending to bumps in some very odd parts. As he sat up, a clap of thunder shook the sliding doors in front of him. The lightning cast an ominous shadow on the forest and that’s when he noticed, someone out there.

For a second he was certain his addled mind was playing tricks but as the sky was split by lightning periodically, he realized that he saw someone running in the trails within the forest. Now that’s a badass! That’s  real runner. He can never be one of those people who is up before the crack of dawn and consumes miles not on flat pavements but on untended wild natural trails.
Over the next few mornings, he realized that the runner was a girl. A black pony-tailed, lithe and fast girl who wore different brightly colored running shoes and dark figure hugging tights.
Three days since the chance lightning lit encounter, he had decided he was in love with the mysterious badass runner  girl and he was going to have to become a runner so she would be interested in him too.
Wannabe runner.

It had been 83 days since he decided he loved the girl and  had forced himself to become a runner. He had spent more money than he could afford and maxed out the only credit card he had to buy shoes and fashion first workout gear. He had started running too but mostly had to cry to himself to get through a couple miles before dragging his feet back to his bare apartment. Wolf down junk food in lieu of all the exercise to come. And despite the physical rigors, unable to sleep!

Then yesterday he had decided to run on the trail where he had seen the girl running all these days, his plan was to run on the same route as her and get to a point where he would pull up next to her and say something like, ‘Fancy seeing you here,’ or some other ice breaker he had seen in Youtube videos on ‘how to ask out any girl’ and had decided only to take advice from videos with over half a million thumbs up seriously and ignored the rest. After breaking ice and making her laugh, staying with her for a few steps, he would pull away nonchalantly and then over subsequent days he would be able to win her over. Real simple.

Though, when he did pull up next to her, all his plans lay forgotten. First, he was completely out of breath in an effort to catch up with her. She ran with a cadence which was almost super human, like the elves running in the Lord of the Rings movies. In contrast, he was stumbling and wheezing as he got to her much like an out of shape Hobbit. He tried his best not to stop, swallowing his cries of pain from the exertion, he turned to look at her. She looked at him too, expressionless.

The last thing he remembered was being pulled into a tunnel, it was completely unreal, it was like he was in space not on the bumpy trail. He could breathe normally and he was speechless looking into her eyes. Those big beautiful dark eyes. He realized that he couldn’t say a word, he realized that the girl had looked away and was now looking straight ahead once again and silently running with her usual resolute pace.

He looked down at his shoes because he was shocked he was keeping pace and that’s when he realized he didn’t have any legs. Next instance, he was back on the trail, on his knees with a stitch in his side and lungs on fire. Sweat was pouring down his face and stinging his eyes. He looked up and saw her turn ahead on to the trail. She was gone. He had failed.  He had missed his chance. Worse still, he had shown what a bad runner he was.


He was nervous because each day that he had caught up with the girl he had been pulled into this parallel space. It wasn’t like anything he had seen before. It was dark but lit with blinking star like lights. He was never able to say anything nor make a sound. And everytime she looked at him, it ended and he was left on his knees with pain in his lungs and questions in his mind. Oddly though each time he was in that space, when he found himself on the trail, he ended up missing a few toes and fingers. And this last attempt had cost him 2/3rds of his left arm. Was he losing himself in his obsession for her? Or was the weird tunnel eating him up? He had seen enough sci-fi movies to know that the tunnel could be anything. A doorway into another dimension, a space portal, speed force. Did Elon Musk build something which allowed him and her to travel on a plane different from reality?


Work wasn’t really his big concern. Most of all, he needed her to know how he felt about her. He needed to find a way to say something in that weird tunnel. He needed answers. He needed to hear from her, before he disappeared into the nothingness he feared he was always heading for. A life with no meaning, no purpose and no one. He had decided he was going to march on, take the plunge. What was that phrase? Leap of something. Leap of faith was it? What was he to have faith in? In her? That she would have answers?

Whatever it maybe he had to try again. He had to have faith that as long as he still had the ability to run, he would be able to tell her how he felt and regain his ‘self’ and a reason to care for not being lost.
So he tied his shoes with one hand that still had three fingers and his mouth, and then he was ready. This was maybe his last chance. He looked out through the sliding doors and saw that snow was now swirling around close to the ground. Everything looked white and he saw that she was already on the trail. He left the apartment through the sliding doors and without sliding the door shut, he started after her. He could see her tracks on the fresh snow. He could see her running on the trail, her hair in a ponytail bouncing on her back with each stride. Her shoes throwing up snow behind her.
He needed to pick up his pace if he was going to do this. 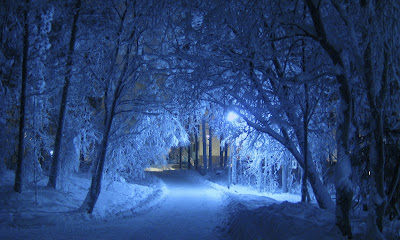 About the Writer :
Tech exec by day, story teller by night; Shashank is an eternal dreamer. On weekends he can be found playing with his golden retriever puppy, Scamper or in theatres on movie marathons with his partner, best friend and fiercest critic.
Labels: Creative Fiction Indian Short Stories Indian Writers Inkspire Leap of Faith