CREATIVE NON-FICTION | Guin, Me and My Leap Of Faith by Vanessa Almeida

Guin says the weirdest things sometimes, as kids usually do. I was angry, sad and in disbelief all at the same time. Let me give you some context. We were at a close friend's birthday dinner on the beach, sipping on juices and cocktails, sand in our toes and the slight winter coolness setting in. The kids were having fun and as Guin decides she's had enough, she comes by my side to sit.

With enthusiasm I ask her to click a Selfie together and we do. She asks to see the picture and says to me "I don't look good mama, I have sad eyes". I was taken aback a bit and asked her what she meant. She clarifies "My eyes are droopy and I  don't look nice in pictures". As a parent you wonder the what, why and hows of this. Has anybody told her that she doesn't look good? Or is she becoming self-conscious because of the opinion of the people that she generally comes across? My mind was going 120 kms/ minute already.
But first I needed to address her then and there, so I shake off my stupor. I make her turn towards me and in the clearest possible voice I say "Baby, you are beautiful! You have beautiful big eyes and you do look very pretty in photographs as well" and instantly she said "But I want to look like you, mama, you're more beautiful!" I'm FLOORED!

How do I respond to that? The mother who is working on her own issues with her body. How do I tell my 8-year-old that she is already so beautiful that I was envious of how pretty she is? I couldn't think. My brain turned into jelly. So I say "In my very honest opinion baby, I think you're more beautiful than me". She smiles..... and that's enough for today. Or so I thought.

The next morning she tells me she doesn't like her legs, so she worries about wearing dresses. I had just averted a crisis the previous night, but no..... it’s there... like a ticking time bomb beneath the rafters that no one can see. Cut back to a few months ago when driving somewhere she exclaims “Oh God, I look like a man! My hands and legs are so hairy!” While in fact, they are not! She’s heard me say that I look like a hairy man every time I was on my way to a parlour to wax. And that’s when I realised how these things, ever so subtly, transfer on to the minds of our babies.

This time I take all day to think over the situation. How do I help this 8 year old child of mine realise that there is nothing wrong with how she looks and that she is beautiful?
I go back to the time when I was 8.  Being made fun of in school by kids for being over-weight and having short hair and not wearing earrings is a memory I cannot shake. I wonder if kids are the same today in Guin’s school and I realise they are. They sit together during recess and compare how big their thighs are at the grand old age of 8. Guinevere doesn’t have a slender body like most kids, instead her body is, for lack of better words, well formed and full. Since she was a baby, relatives would say “Oh she’s so chubby” and as she grew up “Oh she’s become so thin, is she not eating?” to now “She’s put on a little weight, no?”. How does a child’s weight or size matter so much that people have to comment on that first?

After Guin was born, I had the toughest time losing the weight I put on and then some. On a few occasions, I’ve had acquaintances see me and instead of saying “Hello” say “Oh My God! You’ve put on so much weight, Nooooooooo?” In that long drawled out surprise. How do I say the same thing to them? They’ve put on weight/ have gotten bald, etc!  I was called a boy in school because of my haircut – my father never knew to take me to a women’s parlour and instead took me to his barber who only knew to cut hair for boys and men. Being sexually abused at different points of my life by different people made things worse. I lost a lot of weight as I finished school and kept it off for many years still but all the while calling myself fat. I had a very unhealthy relationship with my body and couldn’t love anything about myself. I had even reached a point where my cheeks sunk in and I was told I was too thin. Too thin? To me that sounded like the perfect body! I wanted to set camp and live there forever in that world of “too thin”. And then one day I woke up only to realise how unhappy I was – and so I started to eat.

After I got married I was diagnosed with PCOS (Poly Cystic Ovarian Syndrome). It’s a lifelong condition that I have to manage but neglected after Guin was born and hence the weight issues. Medication for this is a genuinely unnerving thing because my body started behaving differently. My second option was to ditch sugar and most carbs – which has been a constant battle. Now however, I am starting to win that battle. What put everything into perspective was Guin and how she viewed her own body. And then I noticed how all the women around me complained just about anything and everything about their body. Even those with “Beautiful” bodies complained. A startling revelation – nobody is happy with their body.

I just didn’t want that anymore and I realised that I have a long road ahead of me.  It starts with me being comfortable in my own skin and not being critical of what a natural woman looks like. It starts with me being an advocate for unapologetic self-love and showing Guinevere and those women and men around us the same. I’ve seen a few women on social media and very few in real life actually loving themselves and their bodies – it is inspiring! All they keep saying is LOVE YOURSELF. I am learning to. All this is a work in progress. It is new territory and scary and yet, at the same time, it is incredibly liberating! 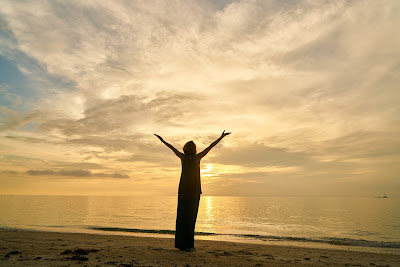 Vanessa Almeida is a mother of an 8 year old girl and runs a personalisation company called Silver Stitches along with two others. She is passionate about almost everything in her life because she is learning to find joy in the little things again. She likes to sing like nobody's listening, read like she has all the time in the world and more importantly hustle like she has no other option.
Labels: Creative Non-Fiction Indian Writers Inkspire Leap of Faith