A few days ago, I was reading some papers my husband had given me regarding some investments we are planning to make for our retirement. It is a big decision. We can’t afford to make a mistake with this one, as age is not on our side. It requires a huge leap of faith. I found myself looking back twenty years to the summer of 1998, when I faced a similar situation. I was a young mother then, with decisions to make and nothing but faith to guide me in the face of uncertainty.

It was a sultry night in June, 1998. I was at my mother’s house in Chennai and I had recently given birth to my second child. I had just put her down to sleep and was hoping she would give me at least a couple of hours of peace and quiet. Just as I settled in to relax, I got a phone call from my husband, who was in our home in Bombay. He told me that he was exploring a job offer in Dubai, UAE. A lump rose in my throat as I heard what he had to say. I was not happy at all. I feared the prospect of moving to a new country with two small children: an infant and a 5-year old. The thought of uprooting my life in India with its familiar routines, to move to somewhere unknown terrified me. At the same time, I didn’t want to discourage my husband. I knew for sure that my fears should not stand in the way of my husband’s career advancement. Amidst all my insecurities, what I had 100% clarity on was that I had to support him in his decision. I trusted him. My faith in my husband and the gut feeling that it would work out convinced me to agree to the move.

The next few months were crazy; passports had to be applied for and we had to travel to Bombay (Mumbai now) to pack up our apartment there. The ordeal began with trying to get my baby’s thumb print on the passport application form. Being just a month old, she still had her hands balled into tight fists. How was I was supposed to force her tender fingers open and press them into an ink pad? I feared that I would accidentally bruise her thumb from the pressure I was exerting on it, and her unrelenting wails didn’t make it any easier. The only other option was to get my baby’s name attested to my passport, but I was given to understand that the country I was moving to wouldn’t accept it.  I was frustrated with the passport authorities for expecting this seemingly impossible feat from an infant. When I was almost ready to give up, my mother and her sisters rallied round me. They offered their wisdom and allayed my fears and together, we worked on a solution. We resorted to four people working in tandem to pry open the tiny fist, holding her thumb and getting an impression. After a number of failed attempts, we finally managed to get a smudge of ink on the application form that somewhat resembled a thumb print. The next hurdle was to take a picture of my baby with both her ears clearly visible for the passport. This too turned out to be harder than expected since she couldn’t even support her own head at the time. But once again, with the help of my family and a great deal of creative maneuvering, we managed to capture a photograph that would meet the required specifications.

I then traveled to Bombay by train in the peak of the monsoon, with my baby and toddler. I had only a month within which to pack up everything in our apartment. I also had to make sure that we received our passports within this month. Getting the passports as soon as possible was crucial as our visa applications could only be processed after our passports were ready. The multiple follow-ups with the person who was facilitating the process, the visits to the post office where I spent hours on my feet to personally collect the passports, were tough to endure. It took a physical toll on me as my body was still recovering from childbirth. To make matters worse, my spoken Hindi was flaky and I did not understand or speak Marathi. This language barrier made it near impossible for me to communicate with officials at the police station and post office. Physical and mental stress led to tense moments which sparked a lot of arguments with my husband. We each held very strong opinions and neither of us was willing to compromise even an inch. But when we realized that the constant quarreling wasn’t helping us to work together, we decided to put our differences aside. We had problems to solve and we had to move forward. The days seemed to slip by with our new passports nowhere in sight, but I tried my best to be patient (with relative success) and reminded myself that this move was going to be good for my family. Somehow, at the very end of the month, the passports were finally ready and we could apply for our visas.

Soon, it was time for my husband to leave India for Dubai and we faced a new obstacle: communication. Those were not the days when everyone carried mobile phones, as not everybody could afford them. The long-distance calls that my husband made from public pay phones were not enough to discuss the numerous questions I had. I wanted to know about school admissions for my child. I needed information about our new apartment. I had to make sure my husband bought a suitable crib for our baby to sleep in. However, I could not understand how difficult it would be for someone who was not used to the oppressive heat of Dubai to stand in the hot sun and talk from a pay phone on the streets. I wanted answers and when I did not get them, tempers frayed again and I wondered what I was getting into. I felt like I was hurtling into a future of uncertainty. I had no choice but to believe that everything would work out, it had to work out. With very limited information on hand, I had to trust my husband to make the right decisions for me and our children.

When I eventually said my goodbyes and boarded the flight to my new country of residence, I was a bundle of nerves and excitement. I was very unsure of how things would unfold. Traveling alone with a five-year old and an infant in tow was challenging. It never occurred to me to ask my husband to make a trip to India to fetch us. International travel and immigration procedures were all new experiences for me. The one thought that I held on to for strength was that our family would finally be together again. I would be seeing my husband after two months. Armed with a lot of advice from my aunt who had lived in the Middle East, I embarked on this new chapter in my life.

But life was not easy in this new country. My husband’s job involved a lot of traveling. Within a week of arriving in Dubai, my 5-year-old fell violently sick. With my husband out of town, I had no one to turn to. However, my husband’s colleagues and acquaintances came to my immediate aid. They rushed my children and me to the hospital in the dead of night in spite of my having only just met them. Their unconditional support in the following days made me feel less alone. It was my faith in my husband’s friends and my instinct to implicitly trust them that saw me through that emergency. Those who were once strangers to me became friends, and over the years, became extended family. We slowly settled into our new life in Dubai and explored the city and the rest of the UAE with them.

It has now been 20 years since the move. My children have grown up and have flown the nest. I still worry about my husband’s career, our health, the children’s future, our parents’ old age etc., but life has been good. I have given in to feelings of negativity and defeat before, but somehow, I find it within me to pull myself together and keep moving. I lean on my family for support, which they offer unconditionally. I remind myself that the only constant in life is my faith: the belief that things will get better and tomorrow will be a better day. If this is not faith, what is? 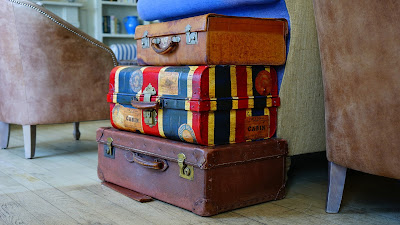 Rajalakshmi Ganesh is a middle-aged Chennaite who has been residing in Dubai for the past twenty years. This is her first published piece and she hopes to continue writing.