I was doing my seasonal plucking of the bright red hibiscuses off my garden trees. Scanning for ones with all their petals intact, while introspecting how everything in life needed to be beautiful and perfect to affirm their righteous position in this world; Including my cleft-lipped 23-year-old daughter Rashmi. Why I  have to carry this albatross around my neck when people like Neeraja enjoyed life as it should be and beyond purely because of an indefectible DNA.
The creaking noise of metal against the floor broke my reverie. I looked up to a familiar figure calling out my name and walking through the gates.
Her face reflecting a hint of dejection, Laxmi said, 'Do you know what that stuck up girl did to my poor boy!?'


'Talking about Neeraja?''
'Of course, I am! Who else fits that description better within the 5 km radius of our living?'
I raised my eyebrows feigning surprise. That cracked her up a bit. Punching my left arm lightly, Laxmi continued, 'You know it’s true.'
I nodded, encouraging her to go on.
'Satish is absolutely sick at heart. She squashed his dreams with a big NO to his proposal.'
Just then the door to the adjacent house opened. Laxmi and I turned to see Neeraja Ashok striding out smartly in her red Pan-Am Head Purser suit and skirt. She ran her hands through her bob cut as if knowing fully well no one else could have pulled it off with such finesse. She emanates confidence, her smile radiant enough to blind the morning sun.
Silently seething in anger for the unfairness this world brought to my daughter while it showered gold and fame to this 22-year-old, I saw yet another chance to soothe my simmering pain.
Deliberately being loud, I spoke to Laxmi “Oh don’t you worry dear, egoistic women with pea-sized brains really don’t deserve your Satish. And who wants models with skimpy clothes ramp-walking our households as daughters-in-law.”


I saw Neeraja's cool facade slip for just a moment. Throwing a fake flying kiss over to us and a 'Bye aunties' in a sing-song tone she disappeared around the corner quickly. Satisfied at seeing her shaken, I continued my chat with Laxmi.

Neeraja
'Argh! These aunties. They had to ruin my morning before an important flight. My persistent efforts to bring Rashmi’s talent to the limelight have always gone in vain. Sheela aunty has always refused to accept any form of help from me. As much as I empathise with her, I’ve never had it easy too.'
A tear threatened to roll down her cheeks. Neeraja knew they misunderstood her nerves of steel for arrogance. It was a prerequisite, for every woman who decided to take up a career in high altitude. She was sailing past all those meaningless utterances of 'Modelling was not for girls from a good family background' one step at a time. These women had no idea of the struggle her parents went through to give her the education she desired. They blocked their ears to the cries of 'Who will marry her?' and 'What’s wrong with you?' from the closest of families.
She let out a silent laugh despite the trauma that coursed through her heart.
'That man... well I can’t call him that. It was too decent a label for what he was. He had been a beast of a husband. The violent fights, unpleasant abuses, uncalled for thrashings...'
A broken relationship that still gave her nightmares. She wished she was given the time to mend her ruptured soul. Her heart was just a cardiac organ now. It did not have the strength to bear emotions just yet. She was gradually building the wings it needed to fly. As much as she liked him, Satish had to wait until then.

24-hours later, I woke up to two things that would change my life forever. A mail from IIT Delhi inviting Rashmi for an interview call for a lecturer post along with a card from Neeraja wishing her all the best. Grudgingly I picked up the card crushing it. Just another attempt to gain our friendship. I despise sympathy and recommendation. Yes, if Rashmi passes this test, this would be her launchpad... But I don't need anyone's help.

And then I read the newspaper headlines.
'Neeraja Ashok – Our angel in disguise – Brave in spirit and Brave in death. The Indian Flight Attendant who saved 360 lives from the claws of terror.'

I sobbed uncontrollably for the next 30 minutes. Wiping my blotchy red eyes, I straightened out the creased card by Neeraja for Rashmi.
*

40 years later the card framed in glass still hung in Sheela's bedroom, while she peacefully passed away in her sleep. She was one amongst the many who was saved by the young air hostess that dreadful day not from the hands of terror but from the clutches of jealousy.

Money, money and money – this was all that Sunil heard and wanted to hear. He believed existence and evolution wasn’t possible without this 5-letter word. From starting off as a Management Consultant to building his own empire of companies, he had entirely dedicated himself to the “noble” cause of wealth maximisation. He saw an opportunity in every loophole often oblivious to the fact that he had family and children who craved for his time rather than comfort.
It hadn’t been a good week for him. Tomorrow would decide his fate. If he could make the impossible happen, Arasu knew his lineage would be freed to make their dreams a reality. As he dragged himself up the stairs, to an entrance that enchanted him every day he yearned for a future where his son would treat his old father and mother to an evening of dinner and laughter in this world-renowned Taj Palace. He walked to his closet ignoring the grandeur of the shimmering chandelier at the centre of the reception hall. Muttering to himself, 'I won’t let my Anand wear this'. Arasu changed into his janitor uniform. 'Yes, he will be a doctor as he wishes.'
Forty lakhs in a day! how was he going to do it? They trumpeted 'Pass by merit and the seat is yours'. Anand had excelled beyond their imagination and yet they said, 'It’s just a capitation fee, all facilities included.' So much for trying to live a virtuous life.
Somewhere behind the buzz of Arasu's vacuuming, he heard bits and pieces of a distant voice over a call, 'Signing the deal...250c'. If only he could grab a 0.1% of that bargain. Bang! He hit against something or rather someone.
''No!'
Wine splashed across Sunil's plush suit. He gave the janitor a tight slap on his cheek. His name tag read ARASU. 'Want to walk backwards? Get yourself another pair of eyes, you idiot.'
Arasu’s ears were ringing with pain from the blow. He wasn’t fully literate, but he had a theory from his experiences with the guests here – Being wealthier was directly proportional to a big fat ego. This man had blocked his path while he was simply doing his cleaner duties. Arasu opened his mouth to apologize, but was drowned out in the echoes of an explosion.
Boom. Boom and more followed.
Paralysed with fear, Arasu saw his co-workers, other employees and the guests he had just crossed by in the reception go down one by one like  dominoes. Were they falling prey to bullets? What was happening here?
Six lads who looked like they were straight out of school, coollyshouldering  guns as though carrying a sling bag. The man who had slapped him  was suddenly pushing him to find him an escape route. He looked shaken, the colour draining out of his face washing away his pride along with it.
Being as tacit as possible, they sneaked their way behind the perpendicular corridor hidden from view giving them the space to think. Arasu could visualise what was happening from the noises behind them and it was terrifying to think that he might be next - curious guests opening their doors to check on the unwelcome intrusion to their peaceful evening – and being shot in the blink of an eye. Gradually there were close to 20 huddled next to each other equally leveled in their status for the very first time.
Of all the days to be stuck on a sinking ship!
Sealing this deal would have pushed Sunil to a rank above the richest of Indians. The very group that owned this hotel and that was why he had symbolically chosen this hotel to finalise it. He pacified himself as usual. “You’re a champ, Sunil, you’ll get out of this”.
He could already see it happening. Arasu was guiding the other guests one at a time towards the emergency exit. One sound, one mistake they would all be dead meat.  And Sunil was the one who made it. He did not see the carpet folded on one side, slipping on it. He fell face flat with a loud thud. A bullet whizzed his way. Sunil closed his eyes for the end. But he felt his  body being dragged. His ribs screaming with pain he heard a voice speak to him with urgency in hushed tones.
'Sir, get up, this way'. The man who he had slapped mercilessly a while ago saved his life by a hair’s breadth.
Arasu shoved Sunil to the exit door, just as a bullet piercing Arasu's chest. His face contorted with disappointment and helplessness. He looked at Sunil with anguish, pointing to the wine stains on his suit mouthing, 'SORRY SIR'.

Sunil died a hundred deaths, his heart beating rapidly while Arasu's eyes stared blankly at him. Arasu was clutching a piece of paper in his right hand. It was a letter to his Manager that read in broken English – 'Manager saar, Need money for son medical seat. Help me.'
It left Sunil flabbergasted, all those things he took for granted flashed across his mind –  family, education and society.
When life beckoned at him with a second chance, thanks to Arasu, Sunil learnt to share his love, knowledge and riches in the right way with those who needed it the most. He had a debt to repay.
((Inspired in parts by Michael Pollack’s story of survival after the 2008 Mumbai Taj Terror Attacks.))
Somewhere a child was being taught to take on this world like a video game by sowing seeds of hate within him. If only, he knew Love is Love and it can’t be anything else – he would have been a winner.

It only takes a change in perspective to weed out jealousy, revenge, pride, arrogance, greed, anger, hate and replace that entirely with LOVE for another Human. It’s a challenge that can revolutionise this planet but are you ready yet? 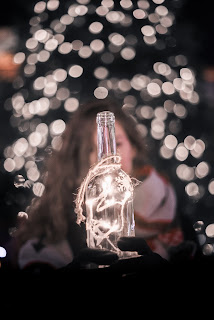 About the Writer:
Sowmya Ravichandran is a Chartered Accountant by profession. She loves anything related to arts and creativity better than numbers. You can read her Creative Fiction piece that was published in the last issue of Inkspire here and here.