CREATIVE FICTION : Of Love and Dreams by Ragini Ravichandran

Jaya smoothened the pleats of her saree. The royal blue chiffon saree felt rough against her palm. She closed the cupboard, its metal handle felt icy cold. The cupboard creaked and shut with a dull thud.

She smiled as she looked at her reflection in the long mirror attached to the cupboard's door. She reached out to a little table near the cupboard and picked up a box of bindis. She skimmed through the contents and picked a decorative, gold-coloured bindi. The bindi shimmered as it came in contact with light from the tube light in the room. She pressed it onto her forehead before returning to look at her reflection in the mirror. Age had only made her look younger; fine lines and wrinkles seemed to add a charm to her face. She tied her almost-white, grey hair in a bun as she recalled what her husband, the late Mr. Shankar would often say, "Jaya... You seem to grow younger by the day and your smile just seems to become all the more beautiful each passing day!"

"Ammamma! You look so pretty! Now I know why grandpa said you were the most beautiful woman he had ever met!" Jaya turned around to see her granddaughter, Priya dressed in a bright pink saree, standing near the bed in the room.
"Nobody can say you are 70!" she teased. Jaya blushed and gave a wide smile as she turned off the light in the room.

Priya was Jaya's only granddaughter. After having lost her daughter and son-in-law to a road accident, it was Jaya and Shankar who had taken Priya in and had brought her up as their child. Today, at 23, with long brown hair braided and held together with a pink band, Priya resembled her mother all the more.

Priya gave her grandmother a quick hug. Her grandmother smelt of sandalwood and camphor, a smell that always calmed her nerves and made her feel loved. Jaya smiled at her and pointed to a big clock hanging on a wall in the hall. Priya followed her grandmother's hand and understood what she wanted to know. "Ammamma, we will leave in a while. I have already booked the cab!"

Decembers in Chennai meant cold mornings and a bearable warm weather throughout the day.  Priya and Jaya locked their house and reached the busy street outside. The Subramaniyan Nagar street in West Mambalam was already abuzz with activities early in the morning. One end of the Street had temples playing devotional songs, the other end had vendors selling fruits, vegetables and flowers, and in between all this were hotels preparing breakfast and houses with fresh rangoli drawn on wet floor. The air was filled with a myriad of smells and sounds... incense, flowers, breakfast, coffee, bells and music.

It had become a ritual at Jaya's house to attend music concerts every weekend. While they waited for the cab, Priya struck a conversation with Jaya... "Tell me ammamma... You love Chennai, don't you?" Jaya, who was lost listening to 'Endaro Mahanubhavulu' playing in the neighbouring house, took a while to respond. She nodded, smiling and signalling through her fingers.

Being born with a vocal chord defect had stripped Jaya of her voice. But this did not stop her from falling in love with Carnatic music. Despite being adept at communicating through sign language, there were days when she would cry in despair at not being able to talk or sing the songs that were etched in her memory, and there were days when she would just resign herself to her fate. When Shankar was alive, he would make it a point to take her to all the Carnatic concerts that happened in the city. He would collect cassettes and records of songs, just so she could listen to it whenever she wanted. With Shankar, there was hardly any moment of sorrow in her life... He was the voice she never had. Post his death, life had suddenly come to a halt. It was Priya who would sing songs to her and take her out to concerts every weekend. Jaya knew, these moments with Priya were priceless, for Priya too had to leave the nest soon, to pursue her dreams. Jaya did not want to stop Priya from doing whatever she desired.

"Oh, you mean to say this is where you have lived your life and you share a special bond with the city? But, why don't you come away with me to the UK next year? I will have to go, to pursue my Masters!" Priya enquired, fiddling with her saree.
Jaya patted Priya on her cheeks and signalled "Your dreams are yours to follow. I will always be here, looking forward to the day you come home again! You have taught me how to do a video call. What more can I ask? If not for technology, it would have been difficult to let you go. I can talk to you everyday and you can talk to me whenever you want to!"

Priya appeared teary-eyed. She gave her ammamma a tight hug. Jaya hugged her back and continued, "Besides, this is what your parents would have wanted. This is what Shankar would have also wanted... You pursuing your dreams! Love is love, it doesn't have to be a person always. It can be love for city and music, like in my case; or it can be a dream to become the best surgeon in the country, like in your case!"

Priya smiled through her tears, understanding what her ammamma meant to say. "I understand ammamma." Just as Jaya patted Priya, she saw a grey car approaching them. The tyres made a crackling sound against the gravel on the road as the car came to a halt in front of them.

"This must be our ride!" Priya held the door open for her ammamma. The door felt cold against her palm. A whiff of lemon drifted out of the car as soon as she opened the door. "Here's to another day of concert and memories!" Jaya smiled and nodded as she got into the car.

"To the Music Academy, Anna!" said Priya, as she got into the car and shut the door with a mild thud.  The car started moving slowly against the gravel, before disappearing into one of the by-lanes of West Mambalam. 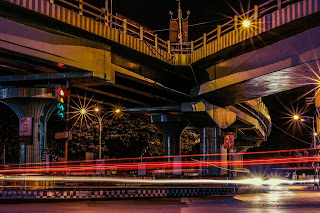 About the Writer:
Ragini Ravichandran grew up reading Enid Blyton. A brief stint at a company gave her exposure to writing and that’s when she fell in love with it completely. Apart from this, she spends her time doodling and gardening.Ragini's story 'Colours in my dream' was also published in Inkspire and you can read it here.