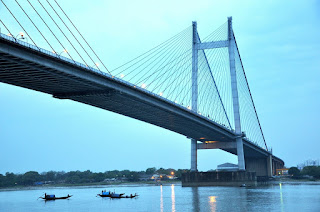 Mridula wandered aimlessly about the little flat, taking in its clean walls, smiling benignly at her relatives, filled with love that they were here, after all that, after all those years, they were here for her and her parents. She missed them, she realized, when she was not there. They would carry on living their lives just as they had been for all these years, she would drop in now and again, listening to their forever conversations, the ones which reminisced marriages long gone by, of Suchitra Sen, of Uttam Kumar and Sabitri, of tea shops where the great and good frequented, where Pablo Neruda was discussed in the same breath as Jyoti Basu. A little cluster was discussing how, in their day, these parts of the city weren’t even considered inhabitable, how they much preferred Ballygunge and Bhowanipore, how the stench of the erstwhile rubbish dump still lingered here, how it reminded them of the marshes that they had once, long ago, passed on their way to picnics in garden houses that had since been swallowed up by rapacious civilization. Mridula beamed brightly at then, stilling them for a brief moment but not silencing. It was reassuring to know that while things had indeed changed, they had not changed all that much.
Mridula meandered between them, walking on a different earth. She climbed the stairs to the communal roof where the caterers had set up their tables and kitchen. A roughshod pandal offered some shade from the glare of the February noonday sun. She tested out the wobbly tables, cast an eye over the bright red plastic chairs, tugged at the little bits of plastic that had frayed. She wondered when she would - if she would - ever be able to afford something grander, the kind they showed in movies where marigolds lay thickly over every surface, the kind of sumptuous yet salt-of-the-earth extravaganza that required a bottomless pot of money to pull off. Here instead, was real salt of the earth, the kind they never showed in movies unless they were depicting grit and tragedy. Standing on the rooftop, Mridula’s gaze caught the city. It was a clear day and the new Hooghly Bridge was visible. Feeling like the empress of all she surveyed, Mridula began to walk downstairs. The pujo had come to an end and her great uncles were milling around in the landing. Her father was there too. The men in her family! She rolled her eyes in exasperation. They never lost an opportunity to pop out, negotiate quick escapes from where the rest of the family - the women- had gathered. She found herself pausing on the stairs, giving into the temptation to hear them speak.
“She tries too hard. Who knows what is the need?”

“She worries too much.”

“She should have waited”.

“What happens when she marries? Will her husband let you live here? She will bring home a new age ghor jamai is it?”

“She doesn’t think she will marry”. That was her father. He was looking down at the ground.

“What’s her worry? If her grandmother got married, so will she”.

“The girls these days are too modern”.

“No. Where?”
Her father again. He continued “Mridula’s friend married someone she had never met. Their parents met, the children were told. They spoke on Skype but the first time they met was at the ashirbad”.
Tania and Jayanta. How nervous Tania had been! And while, by all accounts, she was happy now, Mridula had never thought of replicating Tania’s story for herself. Surely Tania and Jayanta were the exception rather than the rule!
Eyes smarting, Mridula walked down the stairs and past the little huddle of men. They shuffled out of the way with ahems and ahas. She pretended to look out over their heads.
Ah those men, Mridula seethed, they always pretended that they were discussing matters of state, too worldly for a woman’s ears but they were just as bad. Marriage! Marriage, that was what was wanted of her, expected of her. She walked through the relatives who had now begun to look askance for lunch and went to the little balcony next to the kitchen. In a few years, it would become home to an abundance of mops and brooms but for now, it was free. She let out the breath that she didn’t realise she was holding.
It didn’t matter, Mridula rued, resting her head against the iron curlicues of the grille, what she did or how she did it, it would always come back round to marriage, and the fact that at thirty-seven, she was still single. She wondered how her grandmother had stood them for so long,how she had upended her own life to blend seamlessly into theirs when they, all these years later, had yet to overcome the apparent tragedy of a dark and swarthy sister-in-law.
The view from the kitchen balcony was bleak. A sea of corrugated tin roofs punctuated by the odd unfinished brick house with half-done roofs and that verandas which dropped off into nothingness. Mridula didn’t see it. She lived in her own head, she anticipated a different reality to the one in which she lived her life. The reality of her family always took her by surprise and she wondered, not for the first time, how her grandmother had borne it all. She had been the one to introduce the family to birthday parties and cake, to the concept of drinking tea for ritual and pleasure, she had made jellies and jams and even won prizes for it, she had raised her youngest brothers-in-laws as if they were her own children and yet no matter what she did, she would still remain a disappointment to them, the fact that she was not her sister-in-law was a hurdle that they had been unable to get over. Midula had seen the way that their eyes misted over whenever they spoke about her, the way in which they remembered the bottle green of her benarasi sari and the white gleam of her feet as she had threaded her way through the paddy fields and balanced across each ask , a time so very long ago when there was still one Bengal.
Every time Mridula left Kolkata, she forgot all of this, the aching sadness that came from decades of being found wanting seemed to evaporate and instead she was filled with longing, the longing that had brought her here, led her to invest in the flat and try once more to build a life and a home with her parents. But no, it was her marriage they wanted, not her. She asked herself, again, what they stood to gain? After an apocalyptic argument several years ago, the pair of them were no longer on speaking terms, choosing to cohabit out of a sense of duty over love, companionship or anything else. She had never witnessed a moment of tenderness shared between them but they were the biggest advocates of her marriage, posting her profile on every online marriage portal that their WhatsApp contacts referred them to. If it had not been for Mridula’s many rejections, they would have had her married long ago. Her eyes smarted and she felt them well up with tears.

Not now, she told herself, not now. She wouldn’t let the see her like that. The afternoon passed quickly. The caterers had forgotten one of the items, an aunt felt weak, a cousin called to say that they couldn’t make it, Mridula flitted here and there and tried to make do and mend. As evening began to settle over the city and a rosy light, touched with gold, began to pour into the flat, Mridula caught her mother’s eyes. The latter beamed. Mridula smiled back.
Clutching her cup of tea, Santa Sengupta looked at her daughter, filled with hope.
“This light, it’s so beautiful. We call it kone dekha alo, it is the light to see prospective brides with. Maybe that’s where we went wrong Mimoo, with you? Even you look beautiful beneath it”.
Mridula cast her eyes down, she felt that familiar lump rise in her throat. For years she had allowed them to make her feel like she was not enough. Today, she found herself deciding, was not going to be that day. An eerie calm washed over her. Looking up, she spoke quietly, “ I think I look good in any light”. Before she could say anything else, she quickly got up and left the room.
Up on the roof, as the city began twinkle, Mridula considered that it hadn’t been so hard after all, to speak up. Perhaps, she thought, she should have done it before. Here, on the new roof, the city stretched out before her, full of hope. Whether she stayed or whether she took the first flight out, to a new onsite project, to a new city, to a new flat share she felt nothing but hope. She had made a home for herself, a little place of her own to come back to and she would allow no one to steal the joy that it gave her. Her black anchal danced in the wind. She felt like a goddess, bestowed with incredible power. She would not, she decided, allow anyone to make her feel less than...This was new beginning after all. The four walls of her new home would allow her to write a different story.

Glossary
Purohit- priest
Griho-probesh - a housewarming ritual
Anchal - also known as the pallu, the anchal refers to the end of the sari that is draped across
the shoulders
Pujor jama/Pujor sari - it is customary to give new clothes and saris as gifts before Durga Puja.
Uttam Kumar, Suchitra Sen, Sabitri - classic matinee idols from Bengali cinema.
Ashirbad - a blessing ceremony
Kone dekha alo - sundown. Kone means prospective bride and alo means
light.

Born in Kolkata but brought up in Cambridge, Resham’s writing seeks to try and make sense of the immigrant experience. Resham recently contributed to ‘She Speaks’, a collection of short stories written by twenty women of Indian origin living, learning and working from all around the world.  Resham currently lives in Zurich with her husband and two children. You can follow Resham and her writing on Instagram where she records her experiences of raising ‘Third Culture Kids’ using the handle @themigratorymum.