CREATIVE NON-FICTION : Renovating the meaning of hope by Hasitha Illa 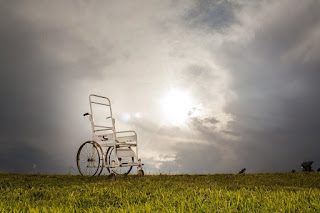 Editor’s Note : The author of this piece has Friedreich’s Ataxia and the disease she refers to in the article is the same.

Ever since I was 10 years old, I would hope for a cure and yearn that my disease would somehow vanish. I would hope to be able to make my own steps and would hope to not be segregated into ‘special’ schools. My mind would constantly be clogged with thoughts on how life would be if I had been ‘normal.' Hope is a very powerful desire that comes from within and it was the only thing that kept my life going.

As this hope took over the majority of my heart, I would go all out to find this cure. I got a golden opportunity to participate in a clinical trial and support the scientists in finding a proper cure.  It was a very tiring road trip to the hospital. But, the biggest pro was that I was playing a part in curing this disease.  During the period of this trial, I learnt many new things about what I was living with.  Those constant blood tests, EKGs, eye tests and efforts that these doctors were taking in housing all of us brought a big smile on my face that one day everything would be okay.

Hope is a form of expectation, and when that isn’t met we end up drowning in disappointment and misery.  This is exactly how I felt when I found out that the drug that I was being tested with had no effect.    My whole mind revolved around this cure and the idea that I would be unhappy without it. Most importantly, I didn’t want to accept my condition, which left me feeling defeated in life. At this point, I had lost all meaning to my  life.  At the same time, my dreams were also crushed and I was spending the darkest times of my life.
In such a state, my family and I needed change.  My mom decided that more than anything, it was high time that I undergo a mental transformation. Growing up in a materialistic world it felt impossible to step into a spiritual path of life. However, I threw all my beliefs into the dustbin to restart my life with a clear mind. Heartfulness meditation was the organisation that helped me embark on the journey of change.

I became open to trying various treatments out there because although one failed, that didn’t mean that the upcoming ones would. Apart from allopathy, India was home to many natural healing methods. This time, I had stronger faith in my country India. I hoped that it housed what I’ve been longing for, a cure. The desire was so strong and the doctors treated with the hope to make a difference.  There was no method that I left behind. Whether it was Ayurveda, Homeopathy or traditional Kerala medicine, I had them all covered. There was this one treatment which required a proper diet and by the time I found the food that I was permitted to eat, I lost 10 kilograms (I was in the hostel during my college years at the time). Another treatment required me to apply natural medicine and thus, I had to go up and down from college as I pursued it.  As exhausting as these treatments were, I was determined to complete my education and to not let them interfere with my goals.

However, there was this one Ayurvedic Rehab Centre that required us to stay there for 6 months, which meant I would have to miss a semester of my college.  But, my family and I were convinced and we had high hopes set on this doctor. My mom and I were going through continuous physical strain during the whole stay. On top of that, we were mentally stressed about the situation and uncertain whether it would work out. In the end, my hard work didn’t go to waste because I was able to walk with the support of crutches, for one kilometre! But, when I was applying this strength I gained in my daily life, it also backfired.  In college, I did not have the energy to cope with my daily activities. It literally felt as if I was trekking to college every day. If I went to college, I would not have the energy to go to the canteen to grab an ice cream. I would have to sacrifice what I wanted and overall I was more dependent on people.

Eventually, I gave in and started to use the wheelchair.  This did not affect my mental health because Heartfulness meditation preaches a number of deep concepts in a very subtle way. Hope is a combination of expectations and desires. Everyone has heard that one should not have expectations in order to be happy and the same goes for desires, because minimizing them gives us the true taste of life. Hoping for a relationship, hoping to be settled in life and hoping for a cure is fine. But, that hope shouldn’t be so strong that it’ll affect you when things go wrong…
Having hope in a subtle way for things that matter to you is the way to go. I won’t say I don’t want a cure but my heart has gravitated towards other things. I’ve grown up with a notion that my happiness depends on this cure. Now, I’ve learnt to accept myself and I am the most elated anyone can be. Hoping for a cure does have a corner space in my heart. But instead of focusing on it, I have gained passions that I hope to succeed in and make a difference in.
Do you think disabled individuals need to be cured?

Hasitha Illa is a passionate writer and disability advocate. She blogs at lifewithhasi.com and shares her experiences and struggles while living with a progressive disease. She strives to bring awareness on the various issues that disabled people like her face and also spread her knowledge of mental health.