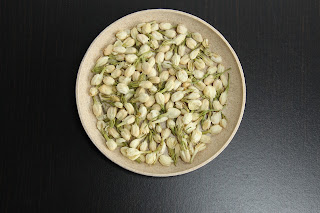 The air was filled with the aroma of filter coffee. Kamala sat on the red oxide floor, near the front door, stringing jasmine and humming 'Kurai Ondrum Illai' by her favourite singer, M.S. Subbulakshmi.

It was nearly 4:30 in the afternoon and the street outside her house was bustling with people either going to the temple or just buying vegetables and fruits. Her house was on the South Chitra Street in Srirangam. It was quite close to the Ranganatha Swamy Temple.

This had been her routine for years - spending her evenings stringing flowers while having made fresh coffee decoction and humming a song as she sat by the door and caught glimpses of people every now and then. Some would call out to her and do a namaskaram, while others would just hang around to listen to her hum a song.

"Ammamma!" She heard her grandson, Suraj call out to her. Suraj was her only grandson and he had come over to spend his college break with her. She adored him as much as she adored her daughter, his mother Latha.

The flowers felt cool against her palm, as she scooped them together and placed them in the bamboo basket.

She got up, dusted her purple cotton saree and began walking towards her room in which Suraj was looking at some photos. The floor felt soothing against her soles.

"Yes, kanna... Tell me," she enquired as she walked into the room which always smelt of camphor. Her room was plain and simple, just like her. The walls that had been painted white 40 years ago, had turned duller over the years. Certain sections of the paint were chipping away and falling as crumbled pieces on the floor. There was a huge window that opened to the garden which had a few plants still intact. The room also had typical objects like an old wooden cot with a thick mattress and two pillows, covered with a crisp bed-sheet and pillow cases; an old iron cupboard that creaked every time it was opened or closed; a small three-blade fan that swung to its own tune; a clock that was always five minutes ahead and a calendar that was always to-date.

"Ammamma, I was looking at the photos. You look so pretty! Amma resembles you so much!"

Kamala sat down on the cot next to Suraj. She felt the mattress sink under her weight as she settled down. She smiled as she looked at the photo Suraj was pointing to, "She does, doesn't she?"

"But Ammamma, who is this?" Suraj enquired as he pointed to a black and white photograph. The photo had a younger Kamala, carrying Latha who was a baby then. They were standing next to a man who was tall, lean and grim. The words 'Krishna Photo Studio' was printed in red ink at the bottom right corner of the photo.

Kamala sighed. This was inevitable, she had to broach this topic with her grandson someday.

Suraj's eyes lit up when he heard the word 'story', "Of course, Ammamma! I love listening to stories, especially when you say it!"

Kamala nodded as she continued...

"So, your mother had just turned 3. The man in the photo is your grandfather. I was married away when I turned 16. You see, back then this was how things worked in the society. Girls were married off early and they weren't allowed to study. I wanted to study and become a doctor. But life had a different plan laid out for me.

Life after marriage was a lot different than what I had expected it to be. We were 10 members in all. I had to cook, do the dishes, wash the clothes and just take care of the elders in the family. I had a child when I turned 18 but I lost him to fever in a few months. Your mother was born when I turned 20. Things were going fine for the first two years. Your grandfather was working with the government and he got transferred to Chennai. I moved to Chennai with your mother. Soon, your grandfather got into bad company. He would come home drunk and pick a fight with me for no reason. Some days, he would hit me just because there was less salt in the food. There were days when he would get annoyed and throw things all around - some days it would be vegetables thrown on the floor or the walls, some days it would be objects hurled at me or Latha. We put up with everything for about two years, trying to resolve the issues and make things work between us. Elders in the family were also brought in to sort things out, it would work only for a few days and things would again go back to being worse. I could take no more of it when he beat Latha black and blue. I picked up your mother, packed a few of our clothes and walked out, promising Latha that she'd never have to see something like this ever again.

After reaching Srirangam, we stayed at two other houses, before moving to this very house. I worked in a hotel and also started doing little things to make ends meet - I learnt to stitch, so I could take up orders for blouses and dress. I started making pickles, jams and other snacks at home. I eventually started my own catering service. I managed to accumulate enough funds to send your mother to school and college. I gradually saved up for her wedding too. The owner of this house was a very sweet lady who was keen to sell this house to me. I paid her little by little over the years and managed to buy this house. My catering service became popular and has brought us this far!"

Kamala wiped the tears in her eyes as she beamed a smile at Suraj.

"Ammamma... Can I ask you something?"

"Did he... Grandfather ever get in touch with you or tried to make up for what he did?"

Kamala looked glum. "He did write to my brothers. He told them that I made a mistake of walking out of the house and that he is ready to forgive and accept us back into his life. I would call my brothers once a week. When they told me about this, it felt so wrong. Many of them advised me to put the past behind us and start living with him. I refused to listen to any of them. I asked Latha if she wanted to go back. She told me she didn't want me to go through all that and that, she was happy with me. It was with pure trust in Sri Ranganatha that I began this new journey... Catering, being a single mother and everything else."

"Oh, Ammamma... More than the god's grace I believe it is your persistence and willpower that has brought you this far!" Suraj hugged his Ammamma as he felt pride well up in his heart.

Kamala hugged him back, "Come on, kanna... Let's have a cup of hot coffee!"

"Ammamma, I have one more thing to tell you... You're a warrior! You're my superhero! You're the most amazing Ammamma in the entire galaxy!"

"My, my! That's a lot of praise for your old Ammamma!" Kamala laughed as she walked out of the room with Suraj by her side.

About the Writer :
Ragini grew up reading Enid Blyton. Over the years, she fell in love with the works of Sudha Murthy and J. K. Rowling, amongst numerous other authors. She loves to write and dabble with colours. She hopes to become a storyteller someday.
Ragini has written for multiple issues of Inkspire and you can find her pieces here.