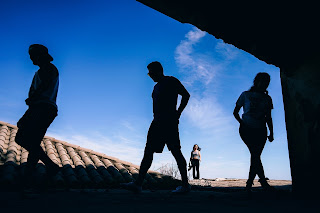 Opening the door of the kitchen balcony, I was greeted by a silent evening breeze. The heat of the summer sun waning away, the winds carrying an aroma of Jasmine from our little outdoor garden, the one my mother-in-law fondly nurtured.

Adheya’s non-stop chatter with her dad would have made it a perfect Sunday evening. However, today was not one of those days.

*
Filling a quarter of the kettle with water and sliding it on, I went to look for some Tulsi leaves from our greenhouse. Ever since Vikram and I spoke to you about the trip, you’ve been off, distracted and thinking of something.

It’s making you nervous and hesitant to come out and ask us what you’re after.

Taking out a small chunk of ginger from the refrigerator and a few cinnamon sticks from the spice rack, I put it all together with the Tulsi in a mortar-pestle ready to be ground along with my own perturbing thoughts of what was bothering you.

In the distance, I could hear Vikram reminiscing about his childhood days with you.
“Aadhu, you won’t believe how I learnt swimming. My friend, pushed me into a stream saying that’s how his father taught him.”

There was a pause, probably for you to reply.
“Ah well, the rest is history.  No professional coaches, no change rooms. We got the hang of it even before we could spell it in English”

A year ago, Shaila aunty had called to check if you would be interested to go for Keyboard classes along with her daughter. I thought it was a great idea since I had been looking to put you into one soon myself.

I tried cajoling you with the fact that you could do live concerts amidst a huge crowd. You rolled your eyes and said “Don’t be so dramatic mom, I’ve played it a few times in Smriti’s house and I just can’t seem to connect with it the same way I do with my Violin.”
*

As if acknowledging her sharp thinking, the shrill release of whistle from the pressure cooker brought me back to reality

Switching on the stove top, added the powdered ingredients, sugar and some tea powder to a pan along with hot water from the kettle. I’ve got some time to kill before the flavours bind to create magic.

Viki continued to revel in his past.
“My brother and I would carry bags of homemade sweets and savouries, cycling all the way to Ramu uncle, Suresh uncle and all our friends and relatives’ homes during Diwali.”

My mother-in-law, jokingly added, from the living room “Oh Viki, why don’t you also tell her that you brats ate half of it even before it reached them.” I heard Adheya giggle after an hour of being tight-lipped.

“Haha, do you remember ma, how the entire street watched us in awe when we burst the thousand-wala.”

Mine was a fairy-tale love story with a familiar sprinkle of cinematic twist to it. My parents strongly opposed our union since Viki was from a different caste. I didn’t give them an option as I loved the man immensely.

They refused to share our happiness, it took them more than a decade to snap out of their silence. I’ve cried myself to sleep on many days over guilt on how it affected you, sidelined from your grandparents’ love, being vexed from answering those awkward questions at weddings, my struggle to reason it out with you. It’s all been painful. As time flew by, I resigned and gave up hope but the happy teenager in you easily forgave their resistance

and broke the ice, while I grapple with the extinct affection that I once had for them.

But that was no excuse to pass on my aversion of relationships to you. Our festivals and celebrations have perennially been only amongst the three of us. How would you know there is a beautiful garden hidden behind the gates unless I led you to it?

You didn’t crib, you didn’t complain, you simply made your own circle of family with your best friends.

The whizzing noise of the boiling water reminded me it was time to add milk if I wanted to get my voodoo potion right.

He was not yet done digging out stories from primeval times.
“There was no telephone and no TV either. We had to use the PCO booth at the end of the street to make a call.

What’s his name!? Umm…Yes, Vasi anna allowed us to make one free call every week.”
“Oh wow!” Aadhu exclaimed. “That must have been tough times, daddy.”

*
Definitely not! I smiled to myself on the electrifying thrill and satisfaction on waiting to watch a movie once a month, unlike Netflix subscriptions that swallow your money and rot your eyes.

I was worried when you wanted a smart phone for your 16th birthday. Six months later, looking at the applause your social media pages have picked up for your Violin podcasts, you proved me wrong twice.

One – when I assumed Violin as an instrument had no place in future; Two – anxiety of every parent fearing their child would deviate when given a gadget.

That makes me realise, it was not you but me, who needs a whack for fecklessly uploading Tik Tok videos to please other “Mommy friends”, while we could have had serious conversations on taking your passion to the next level.

My olfactory nerves were alerted. The magic was done and the best tea had been made if I had to say so myself. One step left before savouring it.

I couldn’t hear much with the TV going on, nevertheless Viki in all likelihood was sharing his favourite chapter of his life – where he helped his grandpa at his humble grocery store packing goods and attending to customers, who often turned into good acquaintances later. He is still mind-blown by the amount of trust and genuine rapport consumers and suppliers had.  His initial intuition was that his grandfather was a glorious hero, however he gradually understood a business flourished based on reliance and honesty.

We have left behind faith, truth and responsibility of duty after a generation of exploiting it, just like this extract of tea sitting on the sink bracing itself to be drained out.

I can’t let you go in an auto without first badgering you for the driver’s details, I don’t let you wear short dresses although you’re only a kid, cause I’ll fail if I fall back on this society to protect you.

Looks like I was wrong, Vikram was talking about another episode where his area MLA on a monthly visit had asked him on a lighter note, if he needed anything else to be put in place.

He had replied earnestly, “Yes sir, I’d like a modest park with a slide and a swing please” And a month later, there was one two kilometres from his place.

“You’ve got to be kidding daddy! How come the pothole next to our school premises never gets fixed despite consistent complaints? I’m not letting it go till its straightened out.”

My equality stopped with portioning the tea in four different cups while here you are concerned about well-being of others around you. My heart swells with pride, for you bring us back to the present and demonstrate what is right.

For Viki and I, news hour is not something we speak of beyond what we see and hear. We have learnt to adjust and live by if the roads were bad, but had we taken action then, you wouldn’t have had to fight for it.

As I was cleaning up, a message from Smriti popped up in your mobile that was put on charge. It was clear from the notification it read “Are you coming for the Pondy trip next weekend!?”
So, this is what was eating you up all day.

It was planned for the same time as our native visit. Thank God! I heaved a sigh of relief thinking it was far worse than that. Muffling a laughter, I knew I couldn’t hide alcohol from you for too long.

Suddenly, my mother-in-law called out to me “Vanya, come look at the news”. Flashing right across the screen were the words “CORONAVIRUS ALERT: STAY SAFE, STAY HOME”.

There you go, more balls of fire thrown on these millennials as if strained familial ties, pressure to excel in extra-curricular activities, distractions of television and mobile, unsupportive and inquisitive community and silently lurking climate crisis weren’t already enough.

We have left them in a state of chaos snacking from a bucket of popcorn while hanging on to our hat for them to grow up and clear the mess. If they are not warriors…

Sowmya Ravichandran is a dreamer, constantly in search of ideas to make this world a better place and firmly believe love is the best solution to it! Creativity and art  excites her and she hopes to tell stories that can make a difference to the way we live. Sowmya is also an accidental Chartered Accountant who is eternally thankful for being partially right-brained and a jack of few trades amongst it all.