CREATIVE NON-FICTION : The Ninja and The Fighter by Kausthub Swaminathan 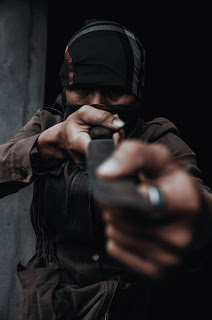 On the mountain side, at incredible speed moved a sword-wielding Ninja to meet his opponent… a swift dodge, two reflexive blocks but then came the slash of the blade. It was done and he saw blood. But he saw something else, something he never had to before. The opponent, now coloured in red was on his feet, with no doubt in his eyes, no evasive instinct, none. He was there for the fight, no red will ever douse the bright yellow that burned inside, the warrior spirit.

The Ninja knew his nemesis was already beaten, but he knew the fighter was aware of it too, and that shook him.

"Knowing you are down and out you still find the resolve to get up one more time. From where do you get this… why even fight still?" asked the Ninja, with a quiver in his voice. For a man who hadn't let his sword quiver in years of battles, the quivering voice was new. The fighter was ready with the answer, he raised his sword once again.

In life you might get more than a few problems from unexpected areas in unfathomable ways. But it's ingrained in you to react swiftly, and try to just take them on. In some situations when it doesn't work you do get hurt and think of giving up. You don't necessarily get your blood spilled like our fighter here, but the effect might be the same nonetheless. If you still find the strength to hang on, or get back up you have the same warrior spirit in you. And that inner strength might just turn heads. It makes you a warrior.

The Ninja was indeed taken aback by his rival's courage. In battles before this one he used to finish off opponents who dared to get back up, but this warrior was different. He showed no fear in his face, nor the pain he was surely suffering from. Just a plain offensive swordsman stance. Still the Ninja wanted to win, so he went in and kicked the fighter down.

In one swift motion he could've defeated his counterpart, but suddenly he couldn't bring himself to do it. The fighter had shaken him so much with his demeanor that he just had to know his story. The Ninja never saw opponents as people with stories, winning was the only thing he could see. But this brave fighter made him reconsider all he'd ever known. He still had to make the effort to control his urge to win, he couldn't just stand and ask about the story when all the muscle memory told him to plunge that sword. So for the first time he rushed off the battlefield deciding he'll come back for the story.

The Ninja had his mentality shaken, but for us it is our beliefs. When all you know, your reality actually changes, rather when you start to see things clearly, it will be tough. You want to pursue this new reality but right from childhood you've been trained not to by society. Like the Ninja, fighting this urge and trying to do something about it makes you a warrior.

It doesn't matter if you run from the real world, leaving both these realities out. It is not necessarily a bad thing, it gives you time to process a potentially life changing incident. We need to break that muscle memory of ignoring all that's going almost under our nose, so running ain't a coward's move if the intention is to change.

Few months passed, the warrior recuperated from the injuries, especially the mental ones. His nemesis had spared his life, and his spirit couldn't take that fact. He decided to hunt down the arrogant swordsman once he recovered. He always believed in laying it all out on the battlefield, even though he didn't want war, and people didn't call him Marathon Man for nothing. Coming to the Ninja, well he didn't do another battle in that time, which was highly unusual. Instead he spent his time processing the incident in the mountains, and asking around about the warrior.

Finally both men found each other. There were no swords, only souls willing to listen. The fighter didn't want to engage in battle as the Ninja could've defeated him back then, the Ninja didn't want to fight as he realized what he had become in the name of living up to the Sword-master title given by the people. As they shared a beverage listening to each other's stories, they realized that there wasn't much of a difference between them. For both had the same bright warrior spirit engraved in them.

The Ninja and The Fighter came out of it with a completely different perspective.

"Maybe each warrior and each ninja has a story like what we told each other now, I am not fighting for a title that people who have little idea of our struggle gave me and dousing many a warrior flame, ending many inspiring stories midway".

Both of them decided to educate other warriors and ninjas that they are all the same.

You are not less of a warrior if you decide to walk away from your usual life. In fact you are better off for doing that. See past the differences in people, hear out their stories, tell them yours. There are many warriors you haven't even heard off, fighting things you know very little about, and in doing so you are a warrior yourself. So instead of squabbling over differences, stand together my dear warrior.

Kausthub Swaminathan is a passionate cricket fan who writes on sports professionally. He is also  a wheelchair user looking to change perceptions. He enjoys writing quotes and blog posts. 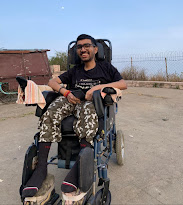