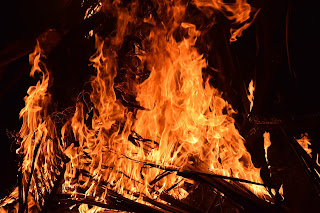 RAAMAAAAAA..!
An enraged voice echoed on the beach shore making the entire crowd - Rama, Seetha,
Lakshman, Hanuman, and his troops to stop and turn towards it. Covered in blood and wrapped up in the stench of rotting corpses, an indignant woman with fierce eyes walked through and stood in
between the blazing fire and Sita. While Hanuman and the others tried to hold her, Rama stopped
them. Sita was just as confused as the rest of them and was observing her.

Infuriated Lakshman who was standing behind Rama, stomped his right foot with his
eyebrows raised and asked, “Who are you?”

She scuttled the blood from her lips using her hand, brought all her energy to fever pitch and
replied loudly, “I am Lankayi”.

Before Lakshman replied, Rama stopped him and asked her “Lankayi, what do you
want.?”
Lankayi lost her energy when she heard Rama’s voice, went on her knees and replied “My life,
Rama”
Rama asked, "Your life?”
Lankayi replied, “Yes, my life! My brown skin which once glowed under the sun and moon is
now covered in the blood of my villagers. My wavy bouncy golden locks now coated with dried
blood and flesh stuck in between. My flawless face is scarred. My brown eyes now have blurred vision. My pinkish lips dry and muddy. My perfect nose is disfigured. The white-coloured dress I wore now colored with blood. When I walked along the shore, the entire village’s masculinity bowed to me! Now, all that I have is the stench of their corpses!”

Tears blended with the blood on over her face and dropped to the ground.
Sita approached Lankayi and placed her hand on Lankayi’s shoulder.
Rama and Lakshman were staring at her with no words to speak.
Lankayi wiped her tears and said “I found my life on that day when I came out of my hut and
saw Ravana’s Pushpaka Vimana flying over our village. After it disappeared between the clouds
I brought my eyes back to the horizon, I couldn’t see anything at that moment. I closed my eyes
again and opened it slowly. And that day, I saw my Kaali.”
She remembered Kaali's face and froze, lost in memories.
Sita gently shook her, “Lankayi?”
Lankayi snapped back from her thoughts and looked at Rama.
“I felt a pull towards Kaali. He was a special man to walk into my life. How lucky I was."
She sighed.He asked my parents their permission to marry me.  They agreed. Our wedding happened on the beach shore as I dreamt. Kaali bought a house inside the city for me to live with him. Only after moving into the city, did I learn that Sita was in the Pushpaka Vimana that day and that you were heading towards Lanka to save her” exclaimed Lankayi.

She was tired, dehydrated and was about to faint.
Hanuman came near her with water. Lankayi pushed it away, looked at him furiously.
With a ferocious voice, she pointed at Rama.
“Your Hanuman, known as your trusted warrior came into Lanka to see how your Sita was doing. When he was captured by Lankan warriors and taken to Ravana’s court, He escaped from them by burning Ravana's palace and our city. That fire destroyed my Kaali’s shop, our home, our entire city-  nothing was left behind. Everything was burnt to ashes”.
Hanuman stepped back silently putting his head down.
“We moved back to our village with empty hands. As days passed, your battle against Ravana got intense. My small village was attacked and destroyed completely. My people were killed for no crime of theirs, in your war. Their dead bodies were piled in the center of the village and I was
trapped in it. When I pulled myself from the pile of dead bodies, I saw my Kaali’s head without
his body on the ground. Standing in the center of all that, I realized that the last piece of hope in
my life had gone. I screamed and sobbed. Devastated, I decided to find you.”
In an anguished voice, she asked “What did I do? Why was my life shattered for something a
man in my birthplace did? Why did Ravana take Sita? Why didn’t your soldiers kill Ravana and
his soldiers alone?”.
With each breath, her rage was building up like a volcano getting ready to erupt.
The stunned crowd looked at her with pity.
Lankayi asked aggressively, “But here..! A fire to test a girl’s purity, why? You killed innocent
children, women, men, and the elderly for nothing. How are you pure when there is the blood of
innocents blood on your hands?”
Rama couldn’t reply to anything and stood with no answers.
“You walked all the way to rescue her for love,didn't you?
Now, why are you checking her love by asking her to burn herself to death?”
Rama took a step back trembling and Lakshman held him tight.
Lankayi couldn’t stop herself and asked “Your war destroyed my life. Your war killed my family
members. Burnt my village down to ash! I am all alone because of you. Tell me, Rama! What
did I do? The fire your war set is still burning inside me, would you dare walk over it?”
Rama looked into her eyes and felt the rage inside her.
“If your objective was killing Ravana and saving Sita, you could’ve done that. Couldn’t you?
The men who died on the street would be alive.
The women who were burnt alive inside their homes would be alive.
The kids, the future of Lanka would be alive.”
With barely any energy left in her, she continued, “I heard your story. You should have learned to say “NO” to a few things in your life Rama.
If you had said ‘No’ to your Sita, you wouldn’t have left the hut to hunt that deer.
If you had said ‘No’ to your Father, this war would have been fully averted. Wouldn’t it?”
Lankayi turned toward Sita, and said, “Say ‘No’ to this!”
Rama stood speechless and guilt-stricken.
Lankayi held Sita’s hand and got up.
“Rama, I am Lankayi. I need my life back”

Thirumalai is from Chennai, Married. He loves travel, nature photography, cycling, and Yoga. He believes in words. They can stimulate a soul from a deep pit to the top of the world. "Always choose your words carefully".

This piece was Thirumalai's  final submission after a six-week writing workshop conducted by Shweta Ganesh Kumar - editor of Inkspire.