The room looked neat enough- there was no blood, the floor had no marks of any struggle, the walls had been painted some time ago and there looked no signs of the paint wearing off any time soon. There were books strewn all around the room- just as in any 17-year old boy’s room. There was a faint smell of sea in the room as well- the salty, pleasant but prickly aroma that stays with people forever once they have been to sea. The windows were open and a soft breeze blew in the room- the soft, cool afternoon breeze on a blazing summer day. The rest of the things in the room looked a little disheveled- clothes were scattered all over the bed- shirts, trousers, underwear, and a dirty looking sheet that had not been washed in ages. But it was nothing out of place, just a 17-year-old boy’s room. A 17-year-old boy’s room, with a 17-year-old lying dead on the bed. It looked like he had been strangulated.

The detective came to that conclusion after seeing marks on the boy’s neck. There were other marks on his frail, cold body- marks on his back from the pellets he had been hit with, may be in the troubles of 2016. But besides those, it did not look like he had struggled with his killer. Just the blue, foggy marks on his neck, shaped like a cloud. The detective looked at the clouds on the boy’s neck for a minute, he looked at the clouds in the sky for another. “Strangulation” he said, almost exclusively to himself. The other policemen in the room had been thinking the same thing, but they were waiting for the detective to confirm. One cannot have an opinion before one’s seniors have had one in the Department. That was the rule. ‘Wait for an opinion from your seniors, wait for confirmation, and wait for orders, except of course when firing your guns. In that case you are all seniors, judges, magistrates, gods.” That was the rule. Yes, respected reader that was indeed the rule of the Department.

The strangulation marks on the 17-year old boy’s cold, newly come forth dead body looked exactly like the ones the Detective had seen before in the victims of this killer. “It must be the same killer, it must be him,” he thought. This killer had been going around choking and killing people for some time now. No reason, no motive, no evidence, no clues. It was almost as if it was a spirit that had lost its mind and was walking around killing people just for the sake of it. But there was one confounding habit to his killings- there were no signs of struggle on his victims at all. “It is as if he loves his victims, he kills them with such care. Such affection!” this time he said it aloud. His deputies looked at him, a little surprised, but used to his eccentric mannerisms. He sometimes talked to himself. Sometimes he would be lost in thought and would forget his surroundings. But don’t we all, honored reader?

The detective looked at the 17-year-old boy’s face once more. There was nothing worth remembering there. It looked calm and peaceful. As if he was just asleep and would wake up at once if the men in the room were to make a noise. So the men in the room took care to tiptoe around the room, trying not to make any sound. The detective kicked the books in the room, then went through the cupboards and all the things in it. He found something and shoved it in his pocket quickly. Then he looked at the missing index finger on his left hand for a moment, and quietly left the room.

This story isn’t about the killer, they found him a couple of years later lying face down in a ditch in a village whose name began with M and which ended at the washed away bridge over a dried up stream. He had committed three more murders since the 17-year old boy. The killer was alive, but he wouldn’t get his face out of the mud. It took 3 villagers to drag him out of the ditch, and he kept screaming “Salt! Salt! I have salt in my mouth! Salt!” During his trial and the subsequent period of confinement in an asylum, he would keep saying the same thing, telling everyone that he could not get the taste out of his mouth. He refused food, and would drink buckets of water and still complain of a dry throat. A doctor took mercy on him and fed him mouthfuls of sugar, but the killer retched and said the salt was still there. He started scratching his mouth and his tongue, and the doctors had to tie his hands up to stop him from tearing his mouth open. He did not die though, he lived a long life. This was surprising for the doctors, who found the Salt Man, as they had begun to call him, unusually healthy despite his refusal to eat food. He would drink water, drink and drink and drink all day. Yet he didn’t die. He lived 17 years in that asylum on a diet of water. Some say a doctor used to mix some vitamins and supplements in the drinks. The Salt Man died one winter morning in his bed. He weighed 71 kilos and 649 grams at the time of his death. Clouds appeared on his neck as he was about to be buried. No one could say why.

So this isn’t about the killer, as you the reader must have gathered by now. If this was about the killer you would have known by now, you are after all a well-read and well-bred connoisseur of literature and culture.  We shall trust your instincts. This story might perhaps be about the detective. But one cannot be absolutely sure what stories are about. They are, after all, stories.

As for the Detective, he died a couple of years after the Salt Man’s murder of the 17-year old boy. A short gun the Detective was cleaning (he used to say it helped him relax) in a stuffy little room in the police armory building exploded in his face, shooting a million pellets in his face. He did not bleed much, it was said, but his face appeared like it had been strewn with little red stars all over. The Detective’s brother noticed blue clouds on the Detective’s neck as they washed his body. Nobody could say why. The Detective looked like the night sky, with stars on his face and clouds on his neck. It was a truly a heavenly sign of the Detectives piety some said, others thought it was because his soul was being tormented as he had been a cruel and cold man all his life, robbing and oppressing people whenever he could get a chance. He had had plenty of chances, so there had been robbing and oppression aplenty. One cannot be sure of anything though, we shall once again trust you, the readers’ literary acumen to decide the reason for the clouds on the Detective’s neck. Perhaps reading on will help you on the way. Read on, then.

Oh, and besides the clouds on the Detective’s neck there also appeared a couple of dark moons on his heart. That is a story for another time, one that perhaps need not be told at all.

This story, dear reader, may well be about the Detective’s missing finger. He had lost it in the troubles of 2008, while he was trying to block a stone flung by a street protestor in a little alley of a little neighborhood whose name begins with L. He got his right hand up just in time to protect his face, and the stone struck his hand. Or was it the left hand? You see, it is hard to remember the details as the Detective was a most ordinary man, his cruelty and oppression considered and included. There was nothing special about him except his missing finger. People used to call him with a word that begins with K, in the local language of course. This was because of the missing finger, and the fact that he would always take bribes with that hand, whichever one it might have been. Left, right. Right, left.

The fort where the ceremony was held was ugly and smelled of garbage that the city would just throw there. But the ceremony was absolutely stunning, with glorious band playing glorious tunes and acrobatics and parades and many other spectacles worth writing about. But let us not write about those. The reader may well know about those.

The moat alongside the fort was where the waste from the salt mine would be thrown. The writer has not much idea about the kind of waste that comes out of salt mines, but it has been told by tellers who tell that it was in that moat the night after the parade that someone spotted a body with clouds on its neck and pockets full of salt. Someone else suggested to get the Ordinary Detective Missing A Finger to investigate, but he was nowhere to be found. He had disappeared, and appeared two days later walking with a limp, saying that he had been to visit the nearby swamps because they were so scenic and had slipped and twisted his ankle as well as something inside his body. He said that although he needed no more twisting than he already had been born with, he would still look into the murder. That was 11 years ago. That is a long time, dear reader, to remember things worth remembering. But people do not just read, they talk too. And they tell stories, whoever they may be about.

For all one knows, this story is not about the Ordinary Detective Missing A Finger either.

This story is about the 17-year old boy with the clouds on his neck. Although he was not the Salt Man’s first victim and neither his last, his was a most intriguing case. Because he had never done anybody any harm. He was a simple 17-year old boy, who loved to play cricket and loved to read Poe. He read Tennyson too, and some Chomsky, and some Nazir, and some Akhtar Mohiuddin, and a little of everything he could his hands on. He did not read newspapers though. He had a brother and two sisters, and he wanted to be a confectioner. He fought with his brother and his sisters, and he fought sometimes with his mother too. He was scared of his father, who was a rich businessman and a great carpenter. The boy liked to... there is not much need to write about the boy here, one should write as little about him as is literally possible.

This story is after all about him. And it is over. 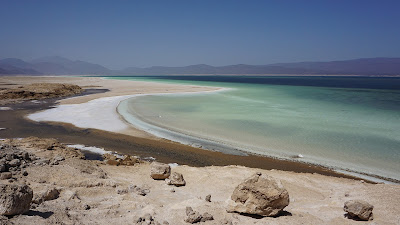 About the writer
The author is a PhD scholar at the University of Kashmir and an independent journalist based in Srinagar, Jammu and Kashmir. He has also taught at the state women's college in Srinagar. His portfolio has been published in AfterImage, New York. A short fiction piece by Mudabbir also appeared in the Turkish magazine Bosphorous Review of Books.
Labels: Creative Fiction Indian Short Stories Indian Writers Inkspire WATER