FEATURED WRITER : The Waterfall of Enlightenment by Ashwin 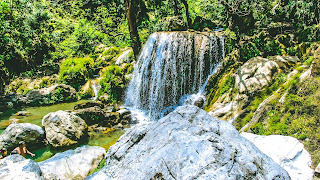 On the way back from Sabarimala, my dad and I stopped at Courtallam (panchayat town on the Western ghats in tenkasi district of Tamil Nadu) for our rest stop. After parking our car, we walked towards the water falls popularly known as the main falls.

As we walked further, I could see the large waterfall tumbling down the mountain and pounding the rocks. The corners were sparkled by splashes and the plants growing nearby gave a pleasant herbal smell. The bubbling sound of the waterfall was blended along with the croaking of the frogs and the cheeping of birds. I gasped in astonishment at the sight but I hesitated to stand beneath the waterfall due to the cold breeze.Moving closer and closer my body started to tremble, I could see many brave souls standing beneath without any hesitation but I am not one of them. My dad quickly moved towards the waterfall and took a nice dip by standing beneath. The crystal clear water along with the herbal smell pulled me to stand beneath despite my hesitations.I was standing beneath the fall completely unaware of everything by the force of water that was hitting me! It was a moment I felt so utterly not in control and that was some experience.

After having a nice bath in the fall we planned to visit the local market, which was located nearby. The crowded market was filled with many stalls filled with items like Banana chips, sweets, toys, hotels, tea shops and many. The crowd there was a mix of devotees who returned from Sabarimala and some local villagers. We were walking around the market stepping in and out of every stalls. We had a delicious ghee halwa which was offered on a piece of banana leaf, it was the best halwa I ever had. The banana chips seemed to be attractive and popular among the crowd . So we planned to get some for my mom and sister back home. We were busy testing samples from every shop. We found the best shop around and made a purchase of two kilograms. Despite all the negotiations, the shopkeeper offered us a small 100gram pack as a compliment. As I unwrapped the small chips packet to munch on, I turned back promptly in response to the tickle behind my back. A toddler boy wearing a wrinkled yellow t-shirt and black trousers smiled with a dimple on his chubby cheeks. He raised his hand and asked for some chips. Now who can say no to that! I was ready to offer the whole packet to the cute kid, but I offered just enough quantity that filled his hands. As he began to munch, there came another two kids, then two more, and within seconds I was surrounded by ten kids asking for chips. On equally distributing, the small packet was only sufficient for four, the other six felt betrayed and was still looking at me by their hands raised.I wanted to serve them more but I wasn't left with any, I quickly ran to my dad who was busy in the stationary stall trying to purchase a handbag for my sister. The kids were also following me. When I tried to grab the bag of chips packets from the hands of my dad, he stopped me by holding my hand. The shopkeeper took a big bamboo stick and headed ferociously towards the group of kids by shouting "heyyyy run" and the group shattered. I was the only one who felt odd about the incident but nobody cared as it seemed to be regularly occurring there.

"Do those kids have a father? Why didn't you offer them anything?"

I raised those questions to my dad on the way back to our vehicle and I only got practised answers in a mild tone in reply. I being entirely dependent on Dad did not bother to question him any further.

I didn’t know whom to blame -  the hard-hearted shopkeeper or my dad who could have offered big chips packets for all those kids by only spending a fraction of the money that he donated to the sabarimala temple or the irresponsible parents who had pushed those kids to this scenario or the government which did not provide food and shelter to those kids.

Blaming any of them was not going to bring a change, I concluded by blaming myself. Despite being twenty-one years old I was highly dependent on my dad for all my financial aspects and that dependency also kept me under his control. I could have rebelled and snatched the chips packet from his hand but they were bought from the fruit of his hard work! Maybe if I had sufficient funds at that time I could have offered them something even bigger. That was the moment I realised and decided to step out of my dad's control by fulfilling my basic financial needs myself.

I managed to seek a job within weeks as soon as I reached home and was very dedicated towards it. As months passed, my days were busy with loads of work a contrary situation for  a twenty-one year old who squanders time by sleeping and playing games. Years later I came to discover the bitter truth that" A dependent creature can never implement his rational thoughts and ideas, he can never create strong impacts, he can only be an audience who accepts everything and not a game changer in this competitive world".

The memory of the magical droplets from the waterfall totally reformed me by enlightening my path, like the sun rising after a dark night.

Ashwin is an evolving young entrepreneur who has recently taken a few steps in managing his dad's firm. A sparkle from an exceptional person got him engaged with books, which paved ways to redefine his identity.

This piece was written as Ashwin's  final assignment for a six-week Creative Fiction writing workshop.