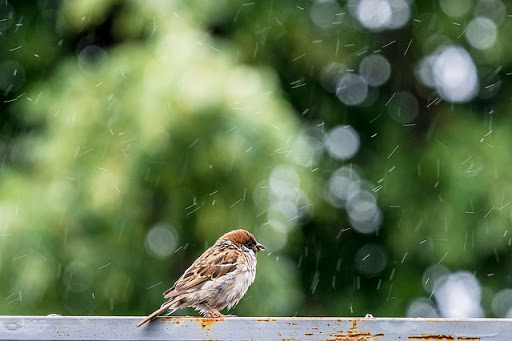 The suffocation of being holed up inside the house in this pandemic is unbearable. Every time the stress gets to me, I take a deep breath and take refuge in my cosy cave. The tiny balcony of my apartment is my breathing space, relaxation zone and cosy cave. It overlooks a big cultivated field that is surrounded on three sides by concrete buildings and a wild patch of land on the other side. I have put up a comfortable chair and a few potted plants there. The cool air from the three mighty neem trees and the chirping, tweeting of the Bul-buls, Mynas, Cuckoos , Couqals and sparrows help calm the nerves. The lush green fields where the crops dance to the tune of the wind and where the peacocks strut around elegantly is such a beautiful sight. Green parrots fly past calling shrilly and chasing one another. These small 5 minute breaks in my cave helps a lot. I reluctantly drag myself away from my seat to attend to the household chores. All through the day (and night) the air is abuzz with activity that goes on and on, irrespective of what happens in our human world.

Every morning at the pink of dawn, the Peacocks (‘Miaow’ ‘Miaow’) and the Indian Koels

‘Cuckoo Cuckoo’ breaks the silence of the early, sometimes as early as 4.30 am morning air by calling to each other. Soon, the Mynas join in and mimic the other birds for sometime and then chirp in their own voices for a while. Once when I was busy cooking, there was such a din outside. A few Mynas were involved in a wrestling match with one another and a big black raven( who the Mynas completely ignored) was trying to act as the referee.

A pair of fat Couqals live in one of the neem trees. They stroll around leisurely pecking the ground for worms and jumping from one branch to another calling to each other in their dull, throaty sound ‘unk...unk..unk’.

A pair of Water Hens cross into the wilderness with their white throated heads bobbing up and down. They spend a lot of time in the bushes and their characteristic

’keekekank..keekekkank’ sound can be heard very often. Such a loud sound for such a tiny bird!

At times, I see a lone Kingfisher, many Bee-eaters and Drongos sitting on a suspended cable wire, with an eye on the field below. The Red-vented Bul-buls build tiny nests in the car park of our apartment and very often I see them going to and fro, from the nest to the field scourging for food for their young ones.

Around mid mornings, when the air is quiet and still, I would take a peep out of the cave. For it is the perfect time for my slithery friend to cross over from one side of the thicket into the wilderness. A huge Rat Snake slithers majestically and slowly across the road at almost the same time every Friday . Maybe it too has a routine of its own! Once, the owlets who were roosting on the tree close to which the snake slithered past, swooped on him and tried to peck him. However the snake dashed quickly into the bushes and escaped! It was such a thrilling wild encounter although it lasted only a few minutes.

When I rest in the afternoons after a good lunch and look for some quiet time, there is music in the air again - music that will not let me rest nor can be ignored. A pair of Rufous Treepies begin to call, steadily. The Babblers compete with them and are joined by the Bul-buls too.

A papaya tree attracts the Woodpeckers and very often, I would see them pecking at the ripe papayas with their sharp beaks. The Bul-buls and Babblers team up against the Woodpeckers and give them a hard time. Once, when I was spying on them from my seat, one Woodpecker flew straight on to my balcony and perched on the net covering just outside. The head bobbed up and down trying to peep in. Suddenly, it sensed my presence and flew away in surprise!

The sun begins to set and all the birds return to their nests. The air is now set for the nocturnal party. Bats fly around hunting for prey. Fat toads and frogs hop from the bushes and croak loudly. A pair of Spotted Owlets reside in a huge tree near the field and they begin their screeching match. At twilight, these owls rest on a neem tree close to my cave and I love watching them. After a period of time, this pair got so used to my presence that they began to call out to me, if they did not find me in my cave in the evenings. Once they kept on screeching and calling continuously which seemed very unusual. When I went to check, one of them swooped close to my cave and looked at me and then flew back to its tree. When I looked there, I saw four owlets snuggling together. The pair had raised a family and they had been screeching to make me come and see their babies! This may seem unbelievable, but it actually happened .This owl family goes about its usual routine after I check on them every day.


Nature could sense my loneliness and desperation and it reached out to me, through all its various forms - birds, insects, creepy - crawlies.The Cosy Cave was my window to the outside world. I saw what many people failed to see. I experienced what many people chose to ignore. The air that flowed in relaxed, recharged and rejuvenated me. The air that was pollution free helped me breathe freely. Most importantly, the air that carried the sounds of nature was therapeutic. And that is how I survived the lockdown.

About the writer :
Senbaga Poonguzhali is a nature lover, bookworm, story teller, trained Bharathanatyam dancer and a blogger. She took to blogging to record her travel stories (https://mytravelmania.wordpress.com/) but now uses it to narrate interesting and funny aspects of her life (https://thechroniclesofacoimbatoremom.wordpress.com/)

She is unschooling her 8yr old daughter and along with her, leads a slow but an interesting life. She finds solace in nature and firmly believes that truth and love are the only solution to every single problem on earth.
Labels: Air Creative Non-Fiction Indian Writers Inkspire