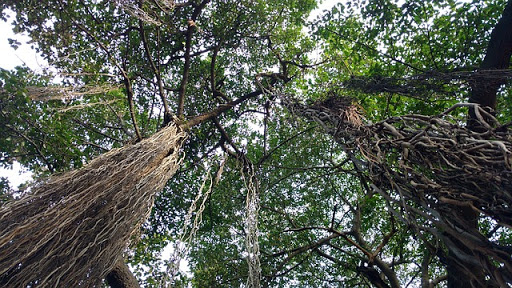 “Shubhamastu!” blessed Satyavathi as she held her right hand upright with her palm facing outwards in Abhaya Mudra, a gesture of reassurance and safety. “Please return whenever I wish to see you Krishna!”, she asserted while wiping tears off her cheeks. “Yes maatha, Anugrhitosmi!”, thanked Krishna as he bowed. He got onto his feet and swiftly started walking away into the nearby forest.

A dark-complexioned skinny boy stepping into early adulthood, Krishna was unlike youth his age. After all, from a very tender phase, Krishna often assured his parents that he knew the secret of his life. He tried to convince them to send him to the forest to do ‘Akhanda Tapas’ (Indestructible Transcendental Meditation). His parents were always dumbstruck by his statements on life purpose and his clarity of thought, but his mother Satyavathi Devi hesitated to allow him to the forest alone to avoid dangerous consequences. As years progressed, Krishna’s constant persuasion led to Satyavathi’s approval only upon accepting her condition that he must appear before her, whenever she wished for his presence. Krishna gladly agreed to the clause and thus the time has come for Krishna to leave to the forest to pursue his life’s purpose.

He walked into the vast dense forest, found a huge Banyan tree by the banks of the river flowing through to be the perfect spot for inaugurating his Tapas. Krishna sat down in the lotus position under the Banyan tree and closed his eyes. Dressed in a saffron handwoven dhoti that complimented his dark skin, Krishna joined his palms together for a salutation seal in Anjali Mudra. With his arms close to his bare upper body, Krishna offered his prayers to begin meditating. His surroundings were filled with the fragrance of fresh flowers, scent of dewy leaves, rustic trunks, and the earthy essence of the forest. With his eyes shut, he sensed the smell and sounds of the chirping birds at dawn, the gentle burbling of the flowing river with pleasant rustling of leaves from the trees and the screeching hums of the insects. The sweet fragrances, the mild breeze through his wavy black hair half tied in a bun, the gleaming rays of the sun rising on his face and the cheerful squeaking of the squirrels made him savor the moment.

The young boy continued to meditate, but he noticed his attention gradually weaning away from the sensory experience of his surroundings. The wavering nature of his mind began to flash glimpses of his family, his fears around fulfilling his purpose of the Akhanda Tapas and some satiating delicacies made by his mother. A wrinkling of the brow indicating his displeasure appeared on Krishna’s face, as he continued to shut his eyes. His inability to focus even after the midday sun got him sweating, made him feel like eons went by already. Krishna tried to concentrate on his purpose of the Tapas amidst all the distractions, but in vain. As the evening sun cast shadows on the ground and the setting sun rays gave an orange tinge to the sky, a sudden gust of wind came up and blew across the forest. The trees swayed heavily while the rustling of the leaves amplified with intense whooshing sounds. Krishna heard the howling wind while his hair blew across his face. He sat still but the strong wind made him agitated.

“Krishna!”, echoed a shrill voice, amidst the blustery wind.

“Krishna Dvaipayana”, reiterated the voice that sounded like a young girl.

Krishna raised his eyebrows in wonder as he sensed a beam of strong bright light over his close eyelids.

“Keep your eyes closed and don’t utter a word!”, the brittle voice commanded, as the heavy winds continued gusting.

Krishna was taken aback on hearing his full name in the middle of nowhere.

“Who are you?”, he thought as he wrinkled his eyes due to the sensation of the flashing light.

“I am Swasana!”, the voice shrieked in response.

“I am Vayu Putri, daughter of Vayu, the Lord of the Winds!”

“Pranamam Devi!”, Krishna greeted in his thoughts, while placing his palms in a salutation position.

“Unlike Hanuman and my future brother Bheema, I do not own a physical entity, I am a Goddess of conscience.”, she confirmed.

“But you can feel and see me with your eyes shut through your swasa, the breath!”

“Dhanyosmi Devi! (I am grateful), But I think I cannot feel you nor see you!”, Krishna’s mind retorted his confusion.

After a brief pause, the heavy blustery wind gradually dwindled. The trees came to a standstill as the rustling of the leaves stopped and the bright shiny beam of light on Krishna’s eyelids started fading away.

“Devi! Are you there?”, Krishna searched while feeling discomfort and tightness in his chest. Suddenly, he felt hot, panicky, and overwhelmed. He felt suffocated and struggled with shortness of breath. As a reflexive response to his inability to breathe, he opened his mouth gasping. He took rapid shallow breaths, unsuccessfully. The tightness in his chest only got worse and his skin turned blue around his mouth. As he was losing control over his mind and body and began to collapse, a sudden gush of air blew onto his face again. Krishna gasped in relief, as he inhaled deeply. He felt the beam of light on his closed eyes once more. But as he took a deep breath with all his might, keeping his attention on the breath, he noticed a faint image of a young girl appear. Krishna was awestruck at the exceptional beauty of the impression that appeared beneath his shut eyes, while he continued to deeply inhale. She seemed very fair with long flowy tresses, dressed in pure white with a purple and white aura around her.

“Are you able to feel and see me now?”, she challenged.

“Yes Devi! You were inside me all this while and I never realized”, Krishna inhaled deeply.

“I am the gift of prana! I am your body’s vital need! Not just the body, but I am the life force!”, Swasana echoed in pride, while the wind outside blew in full vigor.

“I am the fundamental source of life. Swasa, the breath doesn’t just define life and death, but is the totality of life! It means a lot more than the simple movement happening inside the body of all mammals.”, She added.

Krishna continued to nod in agreement, as he inhaled deeply and paid attention to her words inside his head, witnessing her charismatic aura that filled his vision behind those closed eyes.

“Every single movement in the Cosmos is the movement of vishwaprana, the Cosmic Breath. Similarly, in our own personal cosmos of the body and the mind, nothing occurs that is not a movement of prana- breath”, Swasana continued to explain.

“In the forthcoming yugas, man will create complications that will delimit his ability to witness and value me. This will not only bother mankind, but every life form. Since breathing happens effortlessly, they wouldn’t realize that I am all they need, until they struggle with shortness of breath or are on the verge of death.”

“To enjoy the fruit of life, it is essential to value the gift of prana, by honoring the life force inside of them. This gift holds the remedy to all their misery and is the solution for all the unknowns!”, she emphasized.

“…And to enjoy this gift of prana, it is vital to have access to Vayu this pure, as breathing is absolute existence. Nothing more and nothing less!”, Krishna added his insights as he deeply inhaled and exhaled.

The white and purple aura surrounding Swasana brightened up instantly, which eventually led to an enhanced beam of dazzling light on Krishna’s closed eyes.

“Oh, the chosen one! You are bestowed upon the responsibility to pass on the wisdom of the gift of Prana!”, Swasana asserted, as the howling wind gradually disappeared in parts.

“Dhanyosmi Devi!”, Krishna joined his palms as tears rolled from his closed eyes. He continued breathing mindfully and experienced the power of prana as he inhaled. With every deep inhalation and exhalation, Krishna experienced the totality of life force filling his body and the mind, witnessing Swasana every single time.

His ability to concentrate on the air entering inside of him to experience the gift of prana with each inhalation, enabled him to meditate effortlessly irrespective of distractions from his surroundings. The wavering of his mind vanished, the chattering of his inner voice silenced, the countless questions of curiosity no longer surfaced, as he began to cherish and understand the gift of prana that aided in his pursuit of the Akhanda Tapas!

Within a few decades, the lanky young boy Krishna Dvaipayana transformed to become Maharshi Vyasa, popularly called as Veda Vyasa, who classified the Vedas and wrote the 18 puranas, including the epic Mahabharat. His learnings and wisdom were scripted thousands of years ago for the benefit of mankind, thus fulfilling his life’s purpose. Few of his lines from the scriptures in the Upanishads read-

“Man does not live by breath alone”, but by him in whom is the power of breath.”

“O Prana, lord of creation, thou as breath dwellest in the body.” 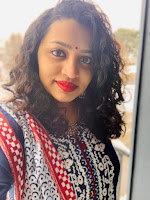 About the Writer :
Srujana is a software solutions specialist by profession, trying to rekindle her long lost love for writing and art. A mother to a sweet little toddler boy, an opinionated introvert and an illustrator by night, she has great inclination towards mindfulness, personal growth, gender equality and mental health.
She illustrates and writes at https://www.instagram.com/aurawithwriting/
Blogs at https://aurawithwriting.wordpress.com/
This piece was written as Srujana’s final assignment for a six-week Creative Fiction writing workshop.
Labels: Air Creative Fiction Featured Writer Indian Short Stories Indian Writers Inkspire