FICTION : The Unbreathable by Sridevi.S.Kumar 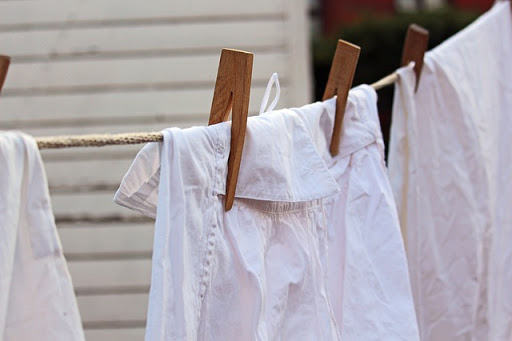 She shook away the tiny drops of sweat from her eyebrows; summer is not the time to enjoy cooking she said to herself. Packing the last of the boxes, zipping them all in the correct order of the snack box followed by the lunch box followed by the emergency snack room and the fork and spoon and finally the water, it was a job in itself. She kept rummaging through the next few seconds considering what would happen and would likely cause any delay in her daily schedule.

The ironing board was ready for her, she always pressed fresh clothes for the kids and her saree pleats were always on point because of the same. The bottle sprayed the water on the uniform and the iron box glided vaporizing the water and ta- da... the uniforms were all bright and shiny. Her sarees were always cottony and light and a reminder of what she is. She took the pleats in a matter of seconds and pressed and pinned them in that order.

The kids were ready, all set to eat the hot idlis and green chutney. They opened the hot-case and a whiff of steam came up making it feel like it was out of an advertisement. They giggled and gobbled the idlis and were ready for their steamy cup of tea. Every time she made the tea, her kids would tell her, smells exactly Iike Ammama's. She would smile, her heart content and filled with pride.

The security guard would just wave them good morning as they would wait for their school bus to come, and she would patiently listen to all the little details of her younger ones' never ending story. The place was always full of kids and parents and there would be every school bus passing through the gate and exiting.

In between all this, the woman who sells fish and clams appears out of nowhere and does her bit at the entrance. All the kids would run at her sight saying, “how come this stinks like yuck?" The security would ask her to come later and she would disappear.

The school bus ritual is usually followed with the chats exchanged between mothers. They have come a long way raising the little monkeys together as a village. They share with her the latest news and gossip in the other buildings. She would rush away, smiling at them and asking them to save the rest for the evening.

Back in the apartment, she would quickly dust the rooms and rearrange the cluttered study tables, wash the dishes and will slip into her favourite time of the day. She would have a relaxing shower,the smell of the Meera thaali powder and her Mysore sandal usually invoked the nostalgia of her own childhood. Stepping out of the bathroom, she would go to the swami room and apply kumkum, the one with the scent of thazhampoo, and step into her world of meeting the ends. She always had her favourite blend of coffee and would start the process of cooking for business. The house now smells ready for the day.


Clearing out the cycle agarbathi's smoke coming from the swami room, she proceeded to the kitchen. The milk cooker was whistling away in its tune and so was the pressure cooker hissing out an entire lung’s capacity out of it. It seemed like morning was just encaspulated in various forms of gases.

She was a home cook. The one who can cook in small amounts for the families who cannot provide meals round the day. Her job was easy according to the world as she should just be doing that as a duty. The entire project of cooking for business emerged as a charity project, where she used to cook for an elderly couple who reminded of her parents. She would then just pack whatever she used to make for the family as a good deed.


Things changed as they should. The pandemic took a toll on a lot of young and old lives and it was not possible for so many to access good food. She stepped up this time supplying to the affected families and soon she realised her means to serve for good deeds was not settling the bills. She was not of the type who would ask for money to whom she served food, as food is measured by hunger and not the brain.

The kitchen is filled with the aroma of coconut oil, curry leaves and asafoetida. The mere hint of tomato can actually cause acidity to the uncle next door, hence his rasam will be no garlic no tomato one. The aunty loves are all the spicy things that she made. Hot idlis, chutney and rice with a portal and curry with aplam would be packed next door by 9 am. She would neatly arrange the disposable plastic boxes and in them she would have arranged every single item made in the kitchen packed fresh off to the nearby residences.

The only thing that she hated was washing the dishes. The lemony smell of vim had taken over the kitchen, replacing the smell of hot rice and rasam. The air around her was not particularly pleasing as it is almost noon and it was unpleasantly humid. She expected the rain to come.

Petrichor, she rushed to the balcony from her half slept slumber, to grab the clothes; half dry half wet. She put them on the chair and looked at the clock; it was tea time for aunty and uncle. She grabbed the Marie biscuits and milk rusks from the counter and filled the Milton flask with hot tea, sugarless, strong with a hint of elachi.She rang the calling bell, they usually nap but either one would slowly show up to open. She rang once again, something didn't sound right.


Keeping aside the food and tea tray she tried calling the extension kept close to the bedside of the couple. It was all very scary until Uncle opened the door.
"I was in the loo; you are one avasarakolam, impatient”.

She gasped and let out a sigh of relief and hugged him tight. "I don't know what would have happened if you had not opened the door".

He smiled through his fallen teeth and rustic beard, and muttered one day might be so, the other day they might cremate us and the next day you are going to make food for her or me again. It is life, just like the water cycle, it will continue. She remained still, aunty stroked her hair and said, "We know we are loved at least by you and kids, that is more than what we ever thought would happen to a childless couple like us. You adopted us into your life, and it is sometimes called `` karma''.


Though she couldn't make a lot out of what they said, she was sure of how to continue her seva. Catching her breath and at a very relaxing pace, she returned to her home. The kids will be home in no time. They will be hungry to eat anything. She made the idlies into small squares and made an idli fry and whipped out their favorite dalgona coffee that they started to love during the pandemic.

Kids, their energy has no limits. They rammed into the house as little tornados even after a whole day at school. The smell of the wet soil and the liquid cloth conditioner made her little one ask. “Didn’t you make pazham pori ? It did rain right!?”

She said, “We can have it once Appa comes back home, probably it will rain harder and we can make paper boats too.” That was a promising answer and the mere mention of their Appa actually made those faces 10 times brighter.

Hustling between finishing the homework and cleaning the dabbas, she had kept the potatoes in the cooker for the count of three whistles. The elder one peeped into the kitchen demanding immediate attention as her younger sister had taken the crayons. They had to be refereed every now and then. The evenings, the twilight, the magical summer skies all reminded of her husband who was on duty. She knew he would rather be happier serving people and not be at home. She was pulled back to reality by the ushering loud whistle number three.

The evening dinner for the aunty and uncle usually was curd rice and some vegetables, the girls loved calling them over the intercom and teasing about whether they want paratha or pizza. They willingly played along with their childishness. They would be served with a glass of hot milk and the prescriptions were ticked off before the next morning. The aunty would bless and say, “Annapoorni, you bless this child, may she survive anything and everything. Give her happiness .” She would smile with a heavy heart that no one could see and glide through the corridor to her apartment.

Her children were 6 and 4, and were out like light. Such heavy bags, she thought as she was packing their next day’s time table. She kissed them good night and then turned on the good knight machine. She coughed and then felt the scent was too strong for the kids. Walking to the cupboard, she stood on her toes to search for the Eucalyptus oil that was natural and repelled the mosquitoes. She managed to blanket them properly and closed the door on her way out.

The night was always breezy, hot but breezy. She delivered her last order for the day, closing her kitchen and then she retired into her night wear. The house just awaits the only relief to come home. The gentle breeze and the slightest horn on the porch; he is here. He comes in and directs her to stay away, though she just wants to hug him. She steps away, he closes the front gate and the house sleeps in peace. He takes a nice long shower and the smell of mysore sandal makes her in awe of her man. She takes in all of that air around him and he sways her as if she is a doll. She says, “Now I can breathe”.

He asks back, “How did you survive the day?” They retire into a different world, where he and she talk and the morning sun peeps in and he disappears into the air.

She wakes up with dismay, but she has to keep a lot of hopes up and running and her strength was to believe that the doctor who was cremated and mysteriously not ever seen dying still comes home and hugs her.

She never has come to believe that someone can cease existing and can vanish as thin air, “How stupid is that?”

She still opens her windows and welcomes the morning sun just to not realize that he is gone, but to fight a battle that no one has seen yet, as air. It exits reality and then the night; she loves the latter the most.


About the Writer:
Sridevi is an engineer by education but a trainer by profession. She is mum to two girls. Sridevi is a Malayali, Tam-bram who loves to write.