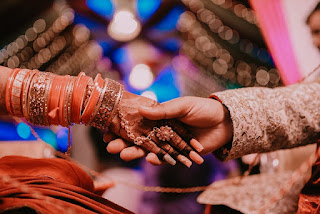 As Rakesh took a sip from his whiskey, he stared at the couple seated in on thrones in front of him. The scene looked straight out of a Bollywood extravaganza. Ramaya dazzled in her heavily-embroidered pink lehenga, but he couldn’t take his eyes off her white sneakers.

They were so Ramaya. Rakesh had seen his jhalli (naive) teenager turn into a successful architect in these last 12 years. She was glamorous yet so down to earth that nobody ever found it hard to approach her. She was the quintessential Indian girl of the 21st century who lived life on her own terms.

Thanks to parents for whom parenting didn’t mean defining her gender for her, Ramaya was so comfortable in her own skin that he had asked her for lessons. They had laughed out loud sitting at the Bombay stall of Dilli Haat, their favourite place to study and eat together.

While eating their spicy vada pao with Ramaya’s favourite chutney and fried green chilli, they had discussed her plans to study architecture. She had seemed unclear and full of doubts.

“Are you sure? If yes, then you’ve to apply for School of Planning and Architecture (SPA) and nothing less,” Rakesh had insisted.

“Are you crazy? I have been an average student my whole life, and you think I can get through the biggest architecture school in the country?” Ramaya wasn’t confident.

Rakesh had more faith in her capabilities than he had in himself. The two years before this conversation had been about discovering each other’s skill, passion, likings, and talent.

Rakesh met Ramaya at a Personality Development course that her 2000s Indian middle-class father had forced her to join before stepping out of her protected nest. Such courses had just started to make headway in the booming Indian middle class that now had the money for extra-curricular activities for their children.

To Rakesh, Ramaya stood out as a confident girl ready to face tough college life at 17. He was a shy, 20-something youngster from a small district in Uttar Pradesh who was still taking in the urban setup that he was now a part of. With a dead mother and an alcoholic father, Rakesh rarely found people who added anything of value to his eventless life. He never spoke with confidence in class.

That’s why he was surprised when Ramaya took the initiative to say Hello and even stayed back after class for Fanta and patty (puff pastry) at the small tea shop outside the YMCA in Connaught Place.

They bonded over philosophy, history and writing. Staying with parents was a disadvantage for Ramaya. She was pampered hard and hardly took part in any of her chores at home. She never understood why someone would choose chores over sitting in a library for an extra 2 hours. Most of her friends believed that the local government library was her second home.

Ramaya and Rakesh developed a bond that strengthened as they spent almost all their days together for the next few years. Rakesh helped her prepare for SPA, and she got through in the first attempt.

In the meantime, Rakesh also took admission at Jawaharlal Nehru University (JNU) to do his Masters. As he wasn’t a Delhite, he managed to get the much-coveted Brahmaputra hostel. His friends frequently used his ID and room there when they needed some privacy.

Ramaya and Rakesh covered every pub and disco that was open over the weekends in her car and spent the early mornings either in the lawns of SPA – listening to old Kishore Kumar classics - or at Parthasarthi Rocks in JNU, discussing life and its idiosyncrasies. Their late-night car rides on the streets of Delhi at 1 AM were legendary.

Ramaya took some of her boyfriends up to his room too. They had an understanding, and she didn’t even have to ask. She had an extra key. Rakesh never felt jealous. He had strong emotions for Ramaya since he had seen her first but could never really put a tag on them. He loved and cared for her like a mate and wanted to be there whenever she needed him.

Was it platonic? Or romantic? The more he thought about it, the surer he felt that their bond couldn’t be defined by society.

Ramaya was the one who took him to therapy sessions after his father passed away. Ramaya, who hated the kitchen, spent two hours every day preparing all his favourite food for two months. She researched for recipes and scolded him if he missed his medication.

And she did all this while planning her own wedding. The spark in her eyes when she told him about Kabir was unmissable.

“Sir, are you done? Can I take this away?” a waiter was standing in front of him with his empty whiskey glass.

“Oh yes, please. Thank you,” Rakesh realized he had been thinking for a long time. Still, he went inside his head again.

A month back, as he had started to feel like himself again, Ramaya had suggested they needed to celebrate. They went out in her car and nostalgia-filled them up to the brink as they danced on the floor of the same dingy place they used to visit as teenagers.

The next few hours were flashing before his eyes now.

As they entered his room together, Ramaya turned back and hugged him tightly. Dressed in her favourite LBD, she looked like an angel to him, a drunk one who was most vulnerable at this moment. As Rakesh guided her towards the couch, she dragged him with her, with her hands clinging to his neck. As he bent down, she came up to kiss him with half-shut eyes.

They had never experienced any awkward moments in the last 12 years of their relationship, but in that moment, Rakesh felt unsure of his feelings. But he had to make a decision.

Covering her with a blanket, he kissed her forehead and whispered, “You crazy girl. I don’t know what to call this, but I am bound to you for this lifetime.”

The next day, when their gang found out that she slept in his room, they bombarded him with texts the whole day.

“So, finally, you did it, right? Please tell me you did!” read one.

“Love triangle?” another one joked, ending the inquiry with a winking emoji.

The most “macho” member of the group had even called him to understand how he could resist such an opportunity after investing 12 years in her and that it must have been so difficult.

He didn’t understand their comments. Why would a human take advantage of another vulnerable human who was not even in her senses? Sometimes, Rakesh wondered if he was too feminine for a man. He was sensitive and cared deeper than most men around him. Getting physical with Ramaya had never even crossed his mind.

Rakesh loved her like a bookworm loves books. He found meaning in her and was always looking for opportunities to understand her better. He was in awe of her intelligence. He had literally grown up with her, and he knew Ramaya cared for him deeply too. He remembered his first visit to her home and how he bonded with his parents instantaneously.

They loved Rakesh like their own and even went on vacations together. But last month’s incident had made everything difficult.

Or was he overthinking this? She was getting married today, and he really wasn’t expecting her to invite him. Ramaya was deeply hurt when he had informed her the following day about the night before.

Rakesh shook his head, stood up, and straightened his crinkled black linen pants. The whiskey wasn’t helping. As he walked to the glittery stage with the beautiful, elegant couple sitting on chairs meant for Rajas and Ranis, Rakesh wondered how she would introduce him to her life partner.

With a nervous gait, he approached them as Ramaya stood up. Kabir followed her cue and took his right hand out.

“Life Mate meet Soul Mate,” she said, looking at Kabir first and then turning to him.

She winked at Rakesh, and the three laughed until Rakesh couldn’t stop the water gushing out of his eyes. 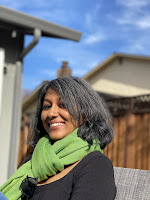 About the Writer :
A former journalist and now a content creator and writer, Anushka can be found scribbling away in her diary when she’s not engaging or learning with her 5-year-old daughter. An avid book reader, Bollywood fan and an ever-evolving feminist, she believes written words can create magic. Anushka shares her views and thoughts regularly on Medium and Instagram.
Anushka wrote this piece as her final assignment for a six-week Creative Fiction Writing Workshop.
Labels: Creative Fiction Featured Writer Indian Short Stories Indian Writers Inkspire