FICTION : Finding 'my family': A journey that took 20 years by Sindhu M V 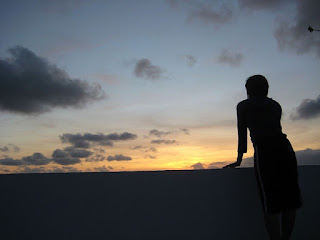 The definition of "a family" was a constant work in progress for Sahasra. No, she wasn't adopted. No, she wasn't the only 'surviving member' of the family. No, her life had no secrets that came as a rude shock. Yet, unlike many others, her "family" never felt home. Her family was not her constant.

When 'family' seemed the most distant

During her first year as a teenager, she first felt distanced. She felt she didn't belong. She thought they never understood her. This wasn't the anguish, the sadness, that most teenagers felt when they had the terrible teenage wars with their parents regarding curfew times or not buying the one thing they wanted; it was much more profound. When they didn't attend her stage performance at the annual celebrations at the school, she seldom felt disappointed. It was almost like she knew that it didn't matter much to them or even her. She was good at her studies, which meant that she wasn't constantly told to study or threatened with television curfews. It wasn't that they didn't care for her otherwise; why would her mother bring her fresh juices while she immersed herself in studies or father enrol her in one of the best schools in the town? All this made her teenager all the more confused. At times, she even blamed herself for not being thankful enough for the life they provided. She often wondered, "Why was it a struggle to love the people who birthed her? Why was she so conflicted about her own family?" She never could find the answer. She couldn't ask these questions to her friends, even the ones she thought at that time would be her friends for life. Because they mostly loved their family and felt anguish only when things didn't go their way.


Close, yet so far

Surprisingly, it was the rules-abiding, no-nonsense, retired banker neighbour that she found herself relating to. She remembered, at first, he hadn't even acknowledged her presence when her family had moved in. Months later, he would glance over while watering his garden. But he still never smiled. Sahasra had no clear memory of when the two broke the ice. But, whatever the reason was and whenever it was, it didn't matter. She would look forward to her interaction with 'Ajja' as she called him every evening after she had returned from school. She would tell him everything from why she hated science to all about her friends. They had healthy arguments and debates, too, from time to time. She felt happy, angry, sad, excited, and had emotions that she rarely felt with her parents. Sahasra began to wonder if this is what it felt to be a family. Even as she contemplated if she could open up about that one dilemma that haunted her almost every day, he told her something that she least expected. He will be moving to his daughter's home. Her daughter didn't want him to live alone any longer. At first, she was indifferent. She reasoned practically and felt ready. And, when it did, she felt unaffected. Or, that's what she thought. Not having her Ajja was a vacuum that she vehemently refused to accept.

Was she an exception?

She was now in college, studying what she always wanted. She had friends with whom she laughed like crazy, shared her apprehensions, and discussed their crushes. While some of her friends had boyfriends, she refused everyone who came to her. She knew she liked them, yet she refused to be committed. At that time, she didn't even feel the need to be committed. Her world revolved around her big group of friends. They were good at studies, professors loved them, they bunked, they spent hours at the small eatery right outside the college, they teased each other, they helped one another. She was having the time of her life. She didn't think much about her family, except when her friends came home and remarked how lucky she was to have a family like that. They adored her parents. They felt home, in ways she never did. That also meant while they knew almost everything about her, they had no clue about the one thing that haunted her.


But, they couldn't be carefree college students for long. They graduated. Some flew abroad to study. Further, some began working, and some got married. Work kept Sahasra busy. She refused all the marriage proposals that came her way. And, probably, it was the first time that her parents had 'a a problem' with her. They couldn't understand why she rejected them. And, they didn't have an answer to anyone who asked when she would get married or what kind of a boy she wanted. Her only answer every single time was - "I am not ready now." Sahasra refused to explain herself beyond that. She let them vent out. But refused to explain herself. She felt they wouldn't understand. One day, they asked if she wanted to marry Vivek, her former colleague who was now her best friend. They had grown from being colleagues to best friends. He visited her home almost every time she did. They went on hikes and backpacking trips. They sometimes stayed at each other's place. Having gotten acquainted with each other's circle of friends and family, they now had a common circle of people. Her instant response was - "Why would I do that? Why would I want to do that." But, it was not just their parents, her friends, her colleagues, her former colleagues, extended family. Everyone had arrived at the same logical conclusion.

And, when she told Vivek, she expected him to laugh along with her. Instead, there was dead silence. She asked if he was so shocked. Vivek said, "To be honest, I have been waiting patiently. I hoped you would ask me that question first." This time, it was Sahasra who didn't have an answer. Five minutes later, she walked away.


A pause and then…

Vivek knew she needed space and sent a text message saying he would wait for her to calm down, put her thoughts together and talk it out. A week had passed, Vivek hadn't yet got a reply to that message. He didn't want to ask her colleagues or parents and put Sahasra on the spot. So he went to the restaurant every morning and evening to see if he could meet her. But she never came. Her home was locked. He refused to use the spare key that he had. It felt wrong. He just decided to wait. That was all he knew he could do. He went on a trek and travelled solo for a month so that he wouldn't have to answer his friends or family.


It was a week after he had got back home when one night after he had returned from work, he found Sahasra taking a nap on the sofa. When she woke up as he put his laptop bag on the table, there was an awkward silence. Maybe not awkward, but a silence that screamed anger and disappointment. By the time he returned after a shower that took more than 30 minutes, she had ordered the parathas and salads. There was a bottle of old monk on the table as well. Vivek knew she would either open up or act like nothing even happened. He just hoped it wasn't the latter because he needed some explanation this time.

Sahasra knew precisely what he was thinking. She said, "You will get your answers. But, let's first go back to the old times. I can't open up otherwise." That night, the two of them laughed and talked just like the 'old times.' There were moments when Vivek felt he didn't even want an explanation. He could just go on if she was always there, just like she was with him today. He refused to debate if it was convenient. It was when he was beginning to feel easy, she said, "You know that I can't relate to my parents, my family who are related to me by blood. There have been moments in my life where I have questioned if something is wrong with me. Let me be honest, I have felt a strange connection with you. Almost like you do with your own family. I mean, I have a vague idea of how it feels to feel that strong connection from all the conversations and experiences I have gathered over the years. But, somewhere, I am scared. I worry if that connection is only momentary and if it will eventually become what it is like with my parents."


At first, Vivek felt a sense of relief. At least, she had agreed that she felt connected to him. But, he knew, he wouldn't be able to answer her. He knew that there was something that he was supposed to do long ago but wasn't brave enough to tell her.


Vivek's exhausted face had a glow that she had never seen till then. 'It's love. The kind of love you have for yours,' she thought. He quietly slipped the little one into her arms even though she felt unsteady and unsure. He whispered, "Meet your family." Hours later, when Sahasra met Sita, Vivek's wife, she couldn't but observe she had a similar glow as Vivek's. As Sahasra held her hand and patted her, Sita said, "From now on, we share equal and bigger responsibility. And, I am sure we will do well, won't we?"

"Hey, I might feel a little left out if you two holds hands so tightly. Count me in," Vivek joked.


The phone rang. It was her Amma. She knew she hadn't visited them even once since the arrival of the newborn. The calls were sporadic, almost formal. She was exhausted. But, she knew, they deserved more. "Amma, I haven't slept in days," she began. "Sita and Vivek need to rest up a bit at night. So I have been the night mamma for the little. But, listen, can you come over this weekend or the next and stay for a few days. It might be a good change for both of you. And, I will come in between my work or my 'mamma night duty' for a good chat." And then the two went on to talk a little longer.


Author Bio :
Sindhu M V wrote about ‘people and product’ for the last 12 years as a Marcom writer. Having shifted base to the Konkan, she is making a conscious effort to lead a slow life. In her 2.0 journey as an independent writer, she explores making an impact through her words and work. Sindhu is also studying to become an educator for little children and ensure that learning remains innate and joyful.