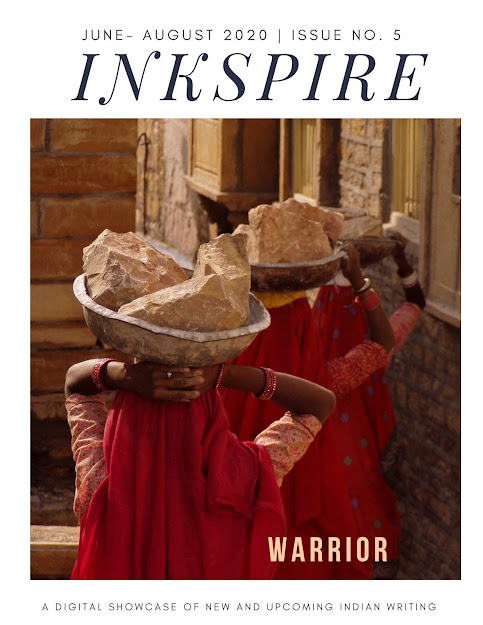 Welcome to the fifth issue of Inkspire. I am so excited about this issue – from the unprecedented number of submissions that came in to the varied interpretations of the theme; this issue has been an absolute joy to work on.

This issue’s theme is 'Warrior'- a theme I chose because I feel like most of us, merely by clinging onto survival in these surreal times, embody some version of this word. Some writers approached the theme with breathtaking originality, while others sent in pieces so raw and honest, culled from their own life experiences. All the submissions this quarter were so well written that it was tough to actually narrow it down to the twenty-two pieces that made it to the issue.

We open this issue with Akila's Warrior Within – a hard-hitting piece based on her own experiences as a pregnant survivor of violent domestic abuse.

Eivine Renny’s ‘Woman – The Undeterred Warrior’ evokes images of the everyday battles that a woman has to face and the bold way in which she chooses to face them.
Sanjhee Gianchandani’s Anxiety narrates the journey of a woman’s battle with anxiety and insecurity.

‘Once a Mumma, always a warrior’ is a simple but moving verse by Mahalakshmi that tells us the story of a mother who wants to shield her growing daughter from the harsh realities of the world.
Swapna’s ‘Warrior Earth’ personifies our planet as someone continues to fight for what is best for the species that inhabit her despite the battle scars left on her by humans.
In ‘The Warrior in Me’ Persis Koshy pens a gentle poem that urges everyone to think of the unseen wars we all fight as we strive to become the best versions of ourselves.


Kausthub Swaminathan uses the parable of a Ninja and a fighter to depict how many times our biggest battles would be simpler if stopped to consider the other side’s story in 'The Ninja and the Fighter'.
Featured Writer Alarmathi Sankaran writes about the moment she realized that she had shed her previous life to become a warrior and how all mothers tend to recognize this at some point in their life in 'Warriors are made on the battleground'.
In ‘Warrior Twins’  Nithyalakshmi recounts her twins journey from prematurely born babies to the thriving babies they are today.
Maansi Saksena’s ‘Unsullied piece of me’ is a stream of consciousness-style piece that gorgeously takes us through her battle with her own self in her quest to make peace with the dreams of her past.

‘Warrior Heart’ is Amit Sisodiya’s light-hearted motivational piece to help those who have been hurt by romantic love to get back into the game again.

Featured Writer Archana S.Kumar’s piece ‘The warfare that began with a crackle’ starts off as a travel story and then takes us through her reinvention as an environmental warrior.

Sripriya Seshadri's 'A Compassionate Warrior' is her lovely memoir of her father an everyday hero.

‘A Healthy Home’ is an excerpt from Ameya Bondre’s debut collection and this piece focuses on the daily battles of a Dalit mother from an unsupported home.

We move on to Creative fiction with 'Protect the Djards' by Meera Dandekar, a fast-paced foray into an alternate reality and an action-packed read.

‘Harbinger of Goodness’ by Sandhya Selvam is a short and quirky read about an unlikely warrior.

‘Lakshmi’ by Ragesree Roy is a heart-wrenching read on a woman who rises up from the cruelties inflicted upon her by her husband and decides to give all that she has to protect her unborn child.

‘Ammamma – a warrior' by Ragini Ravichandran is the story of a grandmother finally opening up about her past to her curious grandson.
‘Lilliput Millenials’ by Sowmya Ravichandran is a mother’s stream of consciousness take on her teenage daughter navigating life through challenges – old and new.

‘Summer’ by Annie Louis flits between a woman’s past and present. Drawn irresistibly to the past which she evokes with her kaleidoscopic memories, she is on a quest to regain entry to a lost world.

‘Lankayi’ is Featured Writer Thirumalai Rajan’s skilful creation of an unforgettable new character and story in the context of the Ramayana.

‘Phoenix’ is Featured Writer Deepika’s raw and moving story of a ten-year-old grappling with displacement and life in a new home, underscoring how survivors are warriors too.

As always, we have a mix of writers who have tried their hand at writing before and also those who are sharing their work for the first time. I would love it if you would show them your love and encourage the writers whose work you liked by leaving them a comment or by sharing their piece on your social networks.

In these challenging times, I hope this issue filled with tales of Warriors cutting across nationalities, genders and socio-economic lines will inspire you in whatever battles you might be fighting at the moment.
Happy Reading!