Welcome to the seventh issue of ‘Inkspire’ - and the first issue to come out this year. I am so excited for all of you to feast your senses on the wonderful pieces in this issue.

This issue’s theme is ‘Water’ – the first of the elemental themes we will be exploring this year. As 2021 began, I opened up submissions asking writers - new and established alike to send me their interpretation of the theme, be it in verse or prose.
And pardon the pun, but the responses flooded in.  This time I decided to shorten the submission period to three weeks to limit the pieces I had to review but the shorter period seemed to motivate writers who had pieces simmering within them. I received almost 15 submissions within the first three days alone and the submissions continued to pour in. Needless to say, it was a tough task to whittle it down to the final twenty-four that made it to this issue.

This issue is also special to me because of the diversity we have in terms of the ages of the writers. For the first time, I have writers ranging from the ages of sixty plus to as young as ten and thirteen writing for Inkspire. It has been a joy to see how the prompt has inspired them in different ways and I look forward to seeing your thoughts on their work too.
Now, let’s dive in.

Featured poet Persis Koshy laments the way water is disrespected and misused in ‘Is there no water?'
K.S. Subramanian constructs three visual poems about the flow of water and its different iterations in ‘Water, Water and other poems’.
Arti Manchanda Grover celebrates water in its myriad forms in her verse simply titled, ‘Water.’
‘Of Roots and Pursuits’ by Khyati Bheda lyrically narrates her father’s journey that takes him far from his native land of the Rann of Kutch all while carrying it in his heart.
Jina Dcruz’s ‘Agua and other poems’ string together experiences from an immigrant mother and child in a foreign country and their journey of finding their own.

We open Creative Nonfiction with ‘Water – my best friend and my enemy’, a descriptive ode by Suma Ravindran to water as counselor and villain while pondering on the human actions that are arrogant enough to think they can control a force of nature.
Swapna.S muses about water in a fitting stream of consciousness manner in ‘My pleasant Pal’.
Mahi Polimeru compares women to water drawing upon their similarities as forces of nature in ‘How are Women and Water comparable?’
Ramya Palakodety writes about realizing how her life depended on water when her family was faced with limited resources in ‘The value of a sip’.

Next, we come to the Featured Nonfiction Writers Section -
Zeena Benjamin takes us with her on her travails through Iceland leaving us in awe of all that she experiences there and her visually descriptive travel tale, ‘Land of Fire and Ice’.
Rina Brahmbhatt shares an excerpt from her upcoming book on raising her daughter who has Autism and is non-verbal in ‘Have you Seen my Sippy Cup?’ Her take on the theme is all about a sippy cup and it gives an insider’s perspective on her journey, as a special needs parent.
Divya Balineni faces a water crisis at home and recounts ‘The Story of Sustainability’ that made her realize the need for sustainability even while using something that seems abundant.

We dive into fiction with ‘Colours of Water’ a compelling story of a family with lives that have been enriched by living on the banks of the Godavari by Sushma Kolluri.
In ‘Balance’ Sanjanaa Bhatijaa captures the anxiety and guilt of a mother who wakes up after a nap on the beach to find her children missing.
Neelima K.E. writes a tongue in cheek parable of a woman married to an alcoholic in ‘Elixir.’
Ragini Parashar crafts a witty tale of ‘The Watery Debt’ paid by the water-loving daughter of a father who endeavours to conserve the resource.
Saanvi Naveen Kana, our youngest writer to date at all of ten years writes the touching story of a boy in search of his lost sister in ‘Memories of the past’.

In ‘Sarayu’ Samanvitha takes us to through the memories of a grandmother who found the strength to fulfill her wishes by believing in the might of the river Goddess.

Adding to the list of young writers in this issue we have thirteen-year-old Hemanya Vasishtha with her poignant story of a sister reminiscing about her elder brother in ‘Flood of Memories’.

Mudabbir Ahmad dazzles with a quirky detective tale (or is it?) in his cleverly written ‘Clouds On Chestnut’.
In ‘A Rightful Reminder’, Srujana Kavoori writes about a family facing an unprecedented water shortage leading a mother to realize that she has slipped into the trap of taking unlimited water for granted.

We wrap up the issue with our Featured Fiction Writers.

Ashwin narrates the tale of a twenty-one year old’s chance transformative encounter with a waterfall in 'The Waterfall of Enlightenment.'
Subhashini narrates the searing tale of Pechiyamma who is a victim of her circumstances, caste and thirst in ‘The Ruthless Water’.
Naga Lakshmi Bhagavatula superbly creates a mythical character from scratch and seamlessly re-imagines a scene from the Ramayana in the exquisite, ‘Vaaruni’.

As usual, most of the writers in this issue are showing their ruminations, musings and writing to outside readers for the first time. We hope that you will enjoy their takes on the theme and that it will inspire you to perhaps try penning your own takes on the theme.

I hope that you enjoy this issue and that you will take the time to appreciate the work in the form of a comment or by sharing it on your social network. 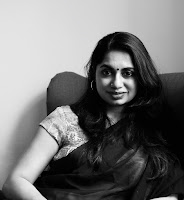